Presentation on theme: "William Shakespeare was the son of John Shakespeare and Mary Arden. He was born on or near April 23, 1564 in Stratford-upon-Avon, London. At the age of."— Presentation transcript:

2 William Shakespeare was the son of John Shakespeare and Mary Arden. He was born on or near April 23, 1564 in Stratford-upon-Avon, London. At the age of 18, Shakespeare married the 26-year-old Anne Hathaway. He had three children-a daughter, Susannaa and twins- son Hamnet and daughter Judith After the birth of the twins, there are seven years of William Shakespeare's life where no records exist. Scholars call this period the “lost years”. Early life

3 SHAKESPEARE’S EDUCATION Shakespeare attended the King Edward VI Grammar School in Stratford which was set up by King Edward VI and was free to all male children in England. It is believed that one of Shakespeare’s early plays- The Comedy Of Errors was written while he was at this school. It is believed that he did not receive any University education.

4 By 1592, there is evidence William Shakespeare earned a living as an actor and a playwright in London and possibly had several plays produced. William Shakespeare was a managing partner in the Lord Chamberlain's Men, an acting company in London. in 1603, the company changed its name to the King's Men. King's Men company was very popular and Shakespeare had works published and sold as popular literature. Shakespeare was able to attract the attention of Henry Wriothesley, the Earl of Southampton, to whom he dedicated his first- and second-published poems: "Venus and Adonis" (1593) and "The Rape of Lucrece" (1594). Theatrical Beginnings

5 Establishing Himself. By 1597, 15 of the 37 plays written by William Shakespeare were published. His early plays were written in the conventional style of the day. However, Shakespeare was very innovative. He adapted the traditional style and created a free flow of words to compose his plays. He went to London for work & became friend of Queen Elizabeth-1 & wrote plays for her. By 1599, William Shakespeare and his business partners built their own theater on the south bank of the Thames River, which they called the Globe. Queen Elizabeth-1

7 Early Works: Histories and Comedies With the exception of Romeo and Juliet, William Shakespeare's first plays were mostly histories written in the early 1590s. Richard II, Henry VI (parts 1, 2 and 3) and Henry V dramatize the destructive results of weak or corrupt rulers. Shakespeare also wrote several comedies during his early period: the witty romance A Midsummer Night's Dream, the romantic Merchant of Venice, the wit and wordplay of Much Ado About Nothing, the charming As You Like It and Twelfth Night. Other plays include Titus Andronicus, The Comedy of Errors, The Taming of the Shrew and The Two Gentlemen of Verona.

8 Later Works: Tragedies and Tragicomedies After 1600, he wrote the tragedies Hamlet, King Lear, Othello and Macbeth. In these, Shakespeare's characters present vivid impressions of human temperament that are timeless and universal. Possibly the best known of these plays is Hamlet, which explores betrayal, retribution, incest and moral failure. In William Shakespeare's final period, he wrote several tragicomedies. Among these are Cymbeline, The Winter's Tale and The Tempest.

9 SALIENT FEATURES OF SHAKESPEARE’S COMEDIES A struggle of young lovers to overcome problems, often the result of the interference of their elders There is some element of separation and reunification Mistaken identities, often involving disguise A clever servant Family tensions that are usually resolved in the end Complex, interwoven plot-lines Frequent use of puns and other styles of comedy

Download ppt "William Shakespeare was the son of John Shakespeare and Mary Arden. He was born on or near April 23, 1564 in Stratford-upon-Avon, London. At the age of." 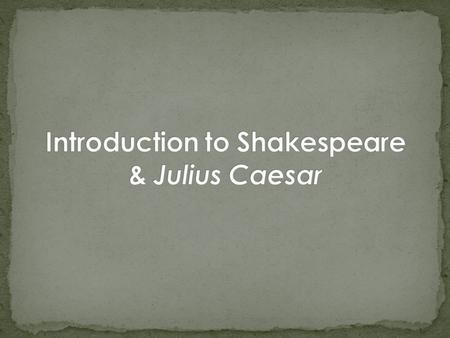 Lived from Important member of Lord Chamberlain’s Men starting in 1594 Many gaps in the knowledge of his life. Some speculate that he was not.