Presentation on theme: "Write briefly about a truly scientific observation you made over the break. I will only call on 3 of you to share."— Presentation transcript:

1 Write briefly about a truly scientific observation you made over the break. I will only call on 3 of you to share

3 Review: What are mountains made of? Rocks How are rocks made into mountains? Plate tectonics What do you think happens to rock once it is exposed to the surface of the Earth? Weathering and Erosion

4 Weathering is the process that breaks down rock and other substances at Earth’s surface. Heat, cold, water, ice, oxygen, and carbon dioxide are elements of weathering. Can you think of examples of weathering?

6 Weathering breaks down rock… Erosion is the removal of rock particles by wind, water, ice and gravity. Weathering and erosion work together to break down and carry away rocks at Earth’s surface

7 Uniformitarianism is the principle that states that the process we see today are the same as those in the past. This is how scientists make hypotheses about things that occurred in the past.

9 Mechanical Weathering is when rock is physically broken into smaller pieces. Smaller pieces are the same composition as the larger pieces Takes long periods of time Can break down mountains!

11 Abrasion is the grinding away of rock by particles carried in wind, water, ice, or gravity.

13 Ice wedging is the process of liquid water settling into cracks in rocks, freezing and cracking the rock as it expands

15 Chemical weathering is the process that breaks down rock through chemical changes. Causes include action of water, oxygen, carbon dioxide, living organisms, and acid rain

19 Weathering is? the process that breaks down rock and other substances at Earth’s surface. Erosion is? the removal of rock particles by wind, water, ice and gravity.

20 Uniformitarianism is? the principle that states that the process we see today are the same as those in the past. Mechanical Weathering is? when rock is physically broken into smaller pieces.

24 Read about the 5 types of chemical weathering. In the same notes we have been working on, tell how each of these elements helps to break down rock.

29 Factors that affect the rate of weathering are the type of rock and the climate. 1. Type of rock: type of minerals determine how fast a rock weathers Permeable rocks (those with air holes) allow water to seep in

31 Bellwork # ? 1-13-14 Write briefly about a scientific observation you made recently.

32 With a partner, or on your own: 1: Read over section 2 2: make a visual glossary for the highlighted and/or bold terms 3: Complete the soil section of our handout from Friday. 4: Answer the assessment questions on page 254

33 Soil: loose weathered material on Earth’s surface in which plants grow Bedrock: solid layer of rock beneath the soil The base for the soil above.

35 Soil is a mixture of rock particles, minerals, decayed organic material, water, and air. Humus: The dark-colored substance that forms as plant and animal remains decay. Humus has nutrients Fertile soil has all of the nutrients plants need to grow.

37 Sand, silt, and clay are the three types of rock that make up most soil. Clay=holds too much water, could drown plants Sand=not enough water/nutrients Loam=Just the right combination. Crumbly, holds air and water Equal parts sand, clay, silt

39 Soil is constantly being formed. Soil Horizon: a layer of soil that differs in color and texture from the layers above or below. Topsoil: crumbly, thick, brown mixture of clay, humus, and other minerals. Subsoil: contains clay and other particles, but little to no humus.

41 Look at the map and reading on page 251 and answer the following questions: 1. What affects the type of soil that forms from bedrock in a region? 2. Why might different soils in Arctic regions have similar characteristics? 3. Which soil would be similar to that in prairie region of the U.S.- a soil in the Brazilian rain forest or a soil in the grasslands of Argentina? 4. Which soil type exists where we live? What climate and vegetation types occur in our region? 5. Why does soil type vary across the country? 6. In which part of the country are tundra soils found?

42 Same as before: pages 252-253 1. How does organic matter like litter become humus? 2. Where does most of the organic matter go? 3. Why does Humus remain? 4. Why is humus essential for plant growth? 5. How are the organisms in the illustration adapted to living in soil? 6. In which part of the soil would you expect to find the fewest examples of plant and animal life? Explain.

43 Natural resource: anything in the environment that humans use. Soil is one of the Earth’s most valuable natural resources because everything that lives on land, including humans, depends directly or indirectly on soil.

45 Soil is a limited natural resource because there is limited supply and: Less than 1/8 of the land on Earth is well suited for farming. It takes a long time for it to form Hundreds of years for a few centimeters to form

46 The value of soil is reduced when soil loses its fertility and when topsoil is lost due to erosion. Soil is exhausted when it loses its fertility Over farming of the cotton crop depleted and exhausted thousands of acres of farms in the South George Washington Carver discovered that certain plants (peanuts, beans, and other legumes) replaced these nutrients and farmers returned to the South.

49 During droughts the soil dried, turned to dust, and blew away 1930 a great drought dried the soil and blew millions of tons of topsoil across the U.S. (as far as NYC!) Farmers began to help conserve soil after this!

53 Soil conservation is the management of soil to prevent its destruction. Methods: 1. Contour plowing: plow fields along the curves of a slope to decrease runoff and erosion

57 3. Crop Rotation: planting different crops in a field every year Cotton and corn absorb a lot of nutrients. The following year a low-absorption crop (like oats, barley or rye) is planted The year after that a plant that restores nutrients, such as legumes, is planted.

Download ppt "Write briefly about a truly scientific observation you made over the break. I will only call on 3 of you to share." 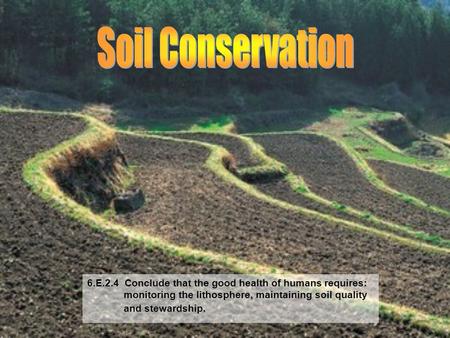 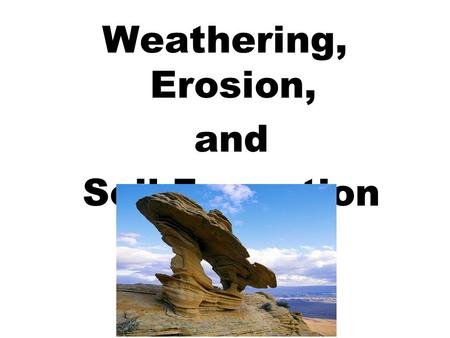 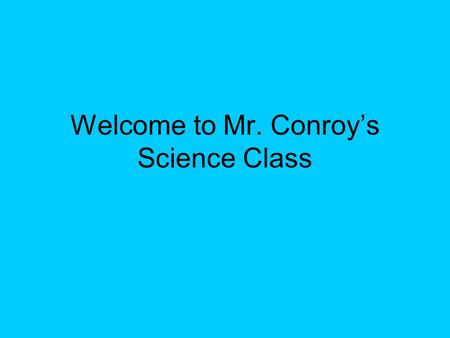