Presentation on theme: "Extreme Wide Shot An establishing shot.. Very Wide Shot The subject is visible, but the emphasis is still on placing her in her environment."— Presentation transcript:

2 Very Wide Shot The subject is visible, but the emphasis is still on placing her in her environment

3 Wide Shot The subject takes up the full frame.

4 Mid Shot Shows some part of the subject in more detail whilst still giving an Impression of the whole subject.

5 Medium Close Up Half way between a MS and a CU.

6 Close Up A certain feature or part of the subject takes up the whole frame.

18 Is an uninterrupted shot in a film which lasts much longer than the conventional editing pace either of the film itself or of films in general, usually lasting several minutes. 2001: A Space Odyssey This movie is filled with long takes, particularly the space- walk scenes. A long take

19 involves both a long take and sophisticated camera movement; The use of the sequence shot allows for realistic and dramatically significant background and middle ground activity. Actors range about the set transacting their business while the camera shifts focus from one plane of depth to another and back again. Significant off-frame action is often followed with a moving camera, characteristically through a series of pans within a single continuous shot. A sequence shot

20 An establishing shot sets up, or "establishes", a scene's setting and/or its participants. Typically it is a shot at the beginning (or, occasionally, end) of a scene indicating where, and sometimes when, the remainder of the scene takes place. Establishing shot

21 Follow shot is a specific camera shot in which the subject being filmed is seemingly pursued by the camera. The follow shot can be achieved through tracking devices, panning, the use of a crane, and zoom lenses resulting in different qualitative images but, nevertheless, recording a subject (actor) in motion. Follow shot Chase scene at beginning of slumdog millionaire.

22 Movie cameras pan by turning horizontally on a vertical axis, but the effect may be enhanced by adding other techniques, such as rails to move the whole camera platform. Slow panning is also combined with zooming in or out on a single subject, leaving the subject in the same Portion of the frame, to emphasize or de-emphasize the subject respectively.

23 A tracking shot also known as a dolly shot is a segment in which the camera is mounted on a Wheeled platform that is pushed on rails while the picture is being taken. You can dolly in on a stationary subject for emphasis, or dolly out, or dolly beside a moving subject an action known as "dollying with" Tracking shot

24 Also known as POV shot Is a short film scene that shows what a character (the subject) is looking at represented through the camera It is usually established by being positioned between a shot of a character looking at something, and a shot showing the character's reaction. A POV shot need not be the strict point-of-view of an actual single character in a film. Sometimes the point-of-view shot is taken over the shoulder of the character (third person), who remains visible on the screen. point of view shot

25 Shot reverse shot A film technique where one character is shown looking at another character (often off-screen), and then the other character is shown looking "back" at the first character. Since the characters are shown facing in opposite directions, the viewer assumes that they are looking at each other. Shot reverse shot is a feature of the "classical" Hollywood style of continuity editing, which deemphasizes transitions between shots such that the audience perceives one continuous action that develops linearly, chronologically, and logically. usually linked through the equally eyeline matches

26 Mainstream Hollywood style Normally begins with a shot of both speakers – Establishing 2 shot Then moves to a montage of one shots as each of the actors speaks and listens These are often over the shoulder shots, this suggests the speakers point of view The shot of the first actor from approx the 2 nd actors point of view is termed reverse-angle-shot. This is an omniscient style. It allows us to see everything from the ideal perspective. More contemporary techniques Tend to emphasize the separateness and individuality of the camera.They may allow us to see everything But always from a separate distinct point of view.

27 Flashback A scene in a film is called a flashback if it depicts a set of events that occurred before the scenes immediately proceeding it. The term flash forward is used to indicate scenes that depict events taking place after the scenes immediately flowing it. Flashbacks and flash forwards are used in movies for foreshadowing and stronger dramatic effect. Flashbacks are a trademark of the Saw movies, with many scenes adding extra depth to characters and adding insight to various aspects of the series. Saw IV has one scene set in real-time, while the rest of the film is a flashback, structured around a series of other flashbacks.

28 In the tracking shot the distance Between the subject and the camera is constant. The building is far enough away not to change greatly between frames. In the zoom the distance between the camera and the subject is constantly changing. The relative size of the background building is magnified in the telephoto shots and minimised in the wide angle frame. Note The angle of the shadow changes in the zoom.

Download ppt "Extreme Wide Shot An establishing shot.. Very Wide Shot The subject is visible, but the emphasis is still on placing her in her environment." 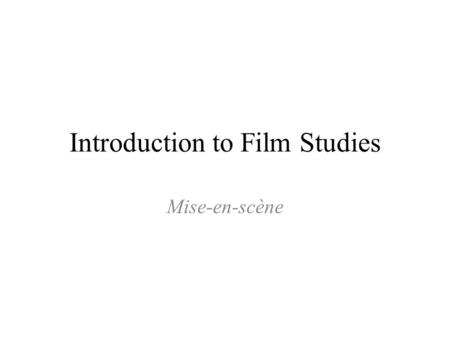 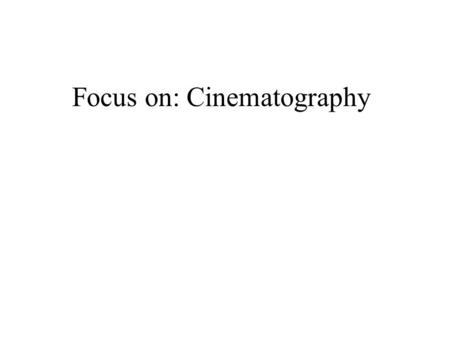 Focus on: Cinematography. Cinematography Etymologically breaks down to writing by movement. Like photography, light translates into visual information.