4 ELVIS I & II BY ANDY WARHOL  Method: took a blown up photograph, transferred it in glue onto silk, and rolled ink across. The ink goes though the silk but not the glue.  He wanted an assembly line effect with little variation.  “With his blue jeans, leather jacket, t-shirt, chewing gum, and slicked-back hair, Elvis represented a new kind of culture. Warhol knew this and featured Elvis repeatedly, using his popularity but at the same time contributing to it.” (Linda Bolton)

6 WHAMM! BY ROY LICHTENSTEIN  Based upon an image from ‘All American Men of War’ published by DC comics in 1962.  During the 1960s Lichtenstein frequently based his artwork off of commercial art sources, such as comic images or advertisements.  “I want [colour] oversimplified—anything that could be vaguely red—becomes red.” (Roy Lichtenstein)

9 OPTICAL ART  Op art exists to fool the eye. Creates a visual tension, in the viewer’s mind, that gives the work the illusion of depth and movement.  Because of it geometrical-based nature, Op art is, almost without exception, non-representational.  Uses perspective and careful juxtaposition of colour.  Positive and negative spaces are of equal importance. Richard Allen. Untitled. (1966) Acrylic. Josef Albers. Homage to the Square: Soft Spoken. (1969) Oil on Masonite.

11 METAMORPHOSIS BY BRIDGET RILEY  Worked only with black and white, while using simple geometric shapes.  Her work was instinctive, not based on theory.  Uses shapes, lines, and colours to create a visual effect on the canvas.  She creates the illusion of depth.

12 COLOUR FIELD  The purpose of colour field painting is to create tension by overlapping and interacting areas of flat colour.  Treats the surface of a canvas or paper as a “field” of vision, without a central focus.  Emphasizes the flatness of the surface.  Do not refer to objects in the natural world.  Reveals the artist’s emotional state of mind – his or her “expression”.  These paintings are often on huge canvases. Clyfford Still. 1957-D No. 1. (1957) Oil on canvas. Mark Rothko. No. 3/No. 13. (1949) Oil on canvas.

14 ZIG-ZAG BY JACK BUSH  Canadian, born in Toronto.  Began his career as a landscape artist who was influenced by the Group of Seven. In 1933 he was invited to join the group and he accepted.  From 1953 – 1960 he was a member of the Painters Eleven group founded to promote abstract painting in Canada.

16 PROTRACTOR VARIATION BY FRANK STELLA  Focused mainly on the general principles of art.  He was an early practitioner of nonrepresentational painting. His work did not provide underlying meanings, emotions, or narratives.  Use the elements of line, colour, shape and composition.

17 WHY WAS POP ART MORE POPULAR WITH THE GENERAL PUBLIC OVER ABSTRACT EXPRESSIONISM?  Pop art was based around the use of everyday objects.  People could easily see what the art was about and think about why the artist may have depicted it.  Works were easily recognizable.  Abstract expressionism pieces were made to convey a strong, emotional message. Hans Hofmann. The Gate. (1959-1960) Andy Warhol. “32 Campbell’s Soup Cans.” (1962) Synthetic polymer paint on canvas. 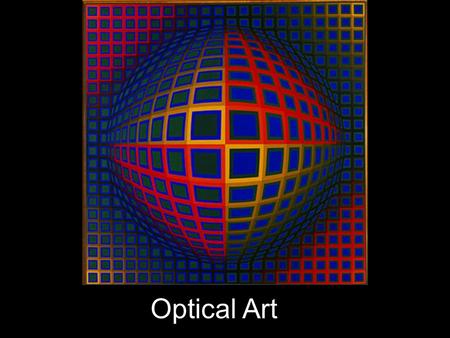 Optical Art. Terms We Need to Know Elements Space: –There are two types of space; positive (filled-in) and negative (empty) –Space deals with how open. 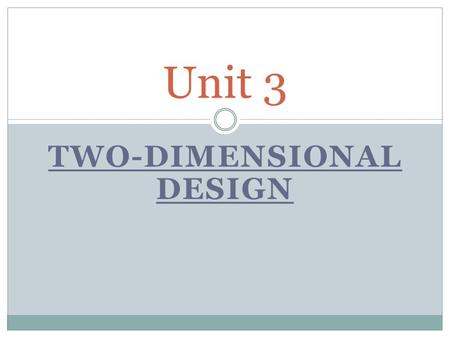 TWO-DIMENSIONAL DESIGN Unit 3. Positive and Negative Space Space is an Element of Art created simply by drawing an object on a page. Positive space is.