6 A Tale of Three Elections
1800: The First Electoral Transition of Power No primaries, no conventions, no speeches Newspapers were very partisan. Campaigns focused not on voters but on state legislatures who chose electors. After many votes in the House, the office of the presidency was transferred to Jefferson peacefully.

7 The Polarizing presidency
2004: The Ratification of a Polarizing Presidency George W. Bush became the fourth Republican since McKinley to win a second term. The intensity of the election was in part due to the controversy of the 2000 election. The 2004 campaign was characterized by negative campaigning. Leadership of the War on Terrorism and “moral values” proved to be key issues.

10 Not-Voting as Rational Choice?
U.S. has low voter turnout Rational abstention thesis: theory that some individuals decide the cost of voting exceed the benefits Downs: it is rational to not vote Those who see clear differences between parties are likely to vote. If indifferent, then one may rationally abstain from voting. Political Efficacy: the belief that one’s political participation really matters Civic Duty: the belief that in order to support democratic government, a citizen should always vote

11 Does Low Turnout Matter?
Some argue it is a not a critical problem Based on belief that preferences of nonvoters are not much different from those who do vote So…results would be the same regardless Nonvoting is voluntary Nonvoting driven by acceptance of the status quo Others believe it is a problem Voters do not represent nonvoters Social make-up and attitudes of nonvoters today are significantly different from those of voters Tend to be low income, younger, blue collar, less educated and more heavily minority

12 Voter Turnout Over time
From Government in America, 13th edition.

15 Patterns in Voter Turnout
Turnout: the proportion of the voting-age public that votes 40% of the eligible adult population votes 25% are occasional voters 35% rarely vote Education: Voters tend to be more educated Income: More voters have higher incomes Age: Younger people vote less Gender: Women vote at the same rate or slightly higher rate than men Race and Ethnicity: Whites vote more regularly than African Americans – related to income and educational differences in the two groups Hispanics vote less than African Americans Have potential to wield much influence given their increasing size Interest in politics: Those interested in politics vote more

17 Why Is Voter Turnout So Low?
Too Busy Difficulty of Registration Difficulty of Absentee Voting Number of Elections Voter Attitudes Weakened Influence of Political Parties

20 Patterns in Vote Choice
Party Identification Most powerful predictor voter behavior Ticket-splitting: voting for candidates of different parties for various offices in the same election Race and Ethnicity Whites increased tendency to vote Republican African Americans vote overwhelmingly for Democrats Hispanics also tend to identify with and vote for Democrats Kerry 53 percent; Bush 44 percent Asian Americans less monolithic Women today more likely to support Democratic candidates Gender gap varies by election Poor vote more often for Democrats; wealthier for Republicans Ideology related closely to vote choice Conservatives for Republicans Liberals for Democrats Issues Retrospective judgment Prospective judgment Retrospective judgment A voter’s evaluation of the performance of the party in power Prospective judgment A voter’s evaluation of a candidate based on what he or she pledges to do about an issue if elected Three requirements for prospective voting: Voters must have an opinion on an issue Voters must have an idea of what action, if any, the government is taking on the issue Voters must see a difference between the two parties on the issue.

22 Mandate and Elections Mandate Theory of Elections
The idea that the winning candidate has a mandate from the people to carry out his or her platforms and politics Politicians like the theory better than political scientists do.

23 Party Identification and Elections
People still generally vote for a party they agree with. With the rise of candidate-centered politics, parties’ hold on voters declined in the 1960s and 1970s. Many more voters make an individual voting decision and are up for grabs each election, (so- called floating voters).

25 Evaluating Political Candidates
Candidate Evaluations: How Americans See the Candidates Candidates want a good visual image. Especially on dimensions of integrity, reliability, and competence Personality plays a role in vote choice, especially if a candidate is perceived to be incompetent or dishonest.

26 How Americans Vote: Explaining Citizens’ Decisions
Policy Voting Basing your vote choice on issue preferences and where the candidates stand on policy issues Policy voting may occur if : Voters know where they and the candidates stand on issues and see differences between candidates Unlikely to occur because: Candidates can be ambiguous on the issues. Media tend to focus on the “horse race” not issues. Today candidates are forced to take a clear stand in the party primaries increasing chances for policy voting.

27 Understanding Elections and Voting Behavior
Democracy and Elections The greater the policy differences between candidates, the more likely voters will be able to steer government policy by their choices. Unlikely—candidates do not always clarify issues Candidates who vow to continue popular policies are more likely to win elections. Retrospective voting: voters cast a vote based on what a candidate has done for them lately Those who feel worse off are likely to vote against incumbents. Bad economies make politicians nervous.

28 Understanding Elections and Voting Behavior
Elections and the Scope of Government Elections generally support government policies and power. Voters feel they are sending a message to government to accomplish something Thus, the government expands to fill the needs of the voters.

29 Summary Voters make two basic decisions at election time:
Whether to vote Who to vote for Party identification, candidate evaluations, and policy positions drive vote choice. Elections are fundamental to a democracy. 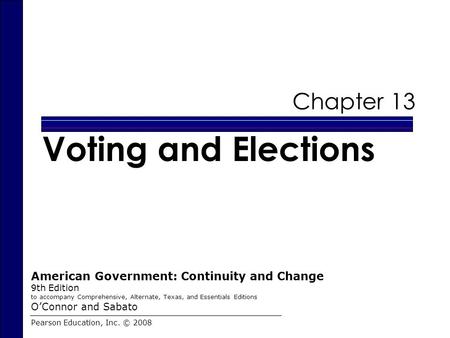 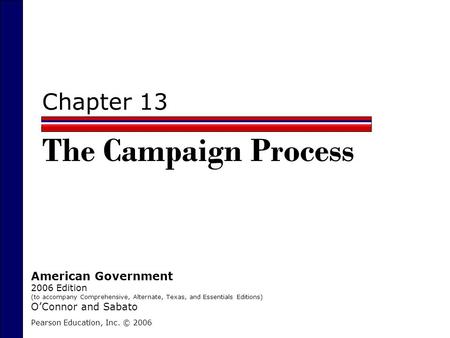