1 The Main Idea Transformations in the African American community contributed to a blossoming of black culture centered in Harlem, New York. Reading Focus What was the Great Migration, and what problems and opportunities faced African Americans in the post–World War I era? What was Harlem, and how was it affected by the Great Migration? Who were the key figures of the Harlem Renaissance? The Harlem Renaissance 20-2

4 African Americans after World War I Tensions Many found opportunities in the North but also racism. Racial tensions were especially severe after World War I, when a shortage of jobs created a rift between whites and African American workers. This tension created a wave of racial violence in the summer of 1919. The deadliest riot occurred in Chicago, Illinois, when a dispute at a public beach led to rioting that left 38 people dead and nearly 300 injured. Racially motivated riots occurred in about two dozen other cities in 1919. Raised Expectations Another factor that added to racial tensions was the changing expectations of African Americans. Many believed they had earned greater freedom for helping fight for freedom overseas in World War I. Unfortunately, not everyone agreed that their war service had earned them greater freedom. In fact, some whites were determined to strike back against the new African American attitudes.

5 Life in Harlem New York City was one of the northern cities many African Americans moved to during the Great Migration, and by the early 1920s, about 200,000 African Americans lived in the city. Most of these people lived in a neighborhood known as Harlem, which became the unofficial capital of African American culture and activism in the United States. A key figure in Harlem’s rise was W.E.B. Du Bois, a well-educated, Massachusetts-born African American leader. In 1909 Du Bois helped found the National Association for the Advancement of Colored People (NAACP) in New York City. Du Bois also served as editor of a magazine called The Crisis, a major outlet for African American writing and poetry, which helped promote the African American arts movement. This movement was known as the Harlem Renaissance.

6 Marcus Garvey and W.E.B. Du Bois Conflict with Du Bois Garvey thought the NAACP discouraged African American self-confidence, and that their goal of breaking down barriers between races threatened African racial purity. Du Bois and the NAACP were suspicious of UNIA too, and The Crisis published an investigation of UNIA. The FBI charged UNIA with mail fraud, and UNIA collapsed when Garvey went to prison and then left the country upon release. Another famous figure of the era was Marcus Garvey, a Jamaican- born American who took pride in his African heritage. Garvey’s Rise Formed the Universal Negro Improvement Association (UNIA), which promoted self- reliance for African Americans without white involvement. Garvey wanted American blacks to go back to Africa to create a new empire. Garvey wanted African Americans to have economic success. His Black Star Line promoted trade among Africans around the world. About 2 million mostly poor African Americans joined UNIA.

7 Poets Poets like Claude McKay and Langston Hughes wrote of black defiance and hope. These poets recorded the distinctive culture of Harlem in the 1920s. A Renaissance in Harlem Artists Black artists won fame during this era, often focusing on the experiences of African Americans. William H. Johnson, Aaron Douglas and Jacob Lawrence were well known. Harlem in the 1920s was home to tens of thousands of African Americans, many from the South, who felt a strong sense of racial pride and identity in this new place. This spirit attracted a historic influx of talented African American writers, thinkers, musicians, and artists, resulting in the Harlem Renaissance. Writers Little African American literature was published before that era. Writers like Zora Neale Hurston and James Weldon Johnson wrote of facing white prejudice.

9 Harlem Performers and Musicians Musicians Harlem was a vital center for jazz, a musical blend of several different forms from the Lower South with new innovations in sound. Much of jazz was improvised, or composed on the spot. Louis Armstrong was a leading performer on the Harlem jazz scene. Other performers included Bessie Smith, Cab Calloway, and composers Duke Ellington and Fats Waller. The Harlem Renaissance helped create new opportunities for African American stage performers, who only began being offered serious roles on the American stage in the 1920s. Performers Paul Robeson came to New York to practice law but won fame onstage, performing in movies and stage productions like Othello. Robeson also played in the groundbreaking 1921 musical Shuffle Along, which had an all-black cast. Josephine Baker was also in that show, and she went on to a remarkable career as a singer and dancer in the U.S. and in Europe, where black performers were more accepted. 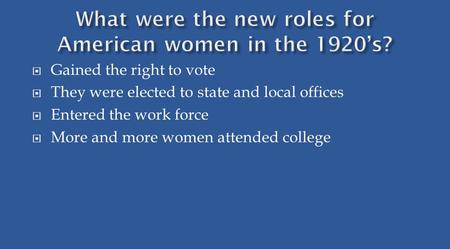 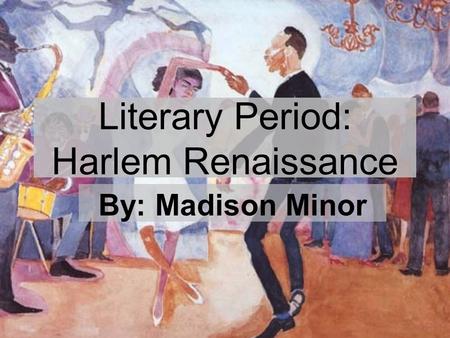 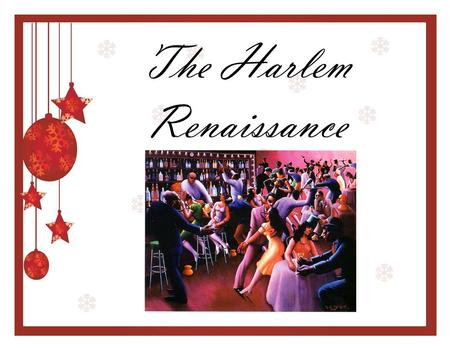