EMPLOYMENT LAW. Learning Goal To be able to identify situations that fall outside the doctrine of Employment-at- Will.

Presentation on theme: "EMPLOYMENT LAW. Learning Goal To be able to identify situations that fall outside the doctrine of Employment-at- Will."— Presentation transcript:

2 Learning Goal To be able to identify situations that fall outside the doctrine of Employment-at- Will.

3 Employment-at-Will Employer is allowed to discharge an employee at any time, for any or no reason, with or without notice General rule in most states Employees not free to leave would be considered slaves Doesn’t apply in certain situations

6 Grievance Procedures:  Establishes a series of steps that an employee must follow to appeal the decision of an employer who may have violated the collective bargaining agreement. Collective Bargaining Agreements

7 Layoffs & Plant Closings  Due to Economic conditions, Union’s cannot guarantee an employee a job for life  Severance pay can be included in CBA  Set amount of money paid during unemployement  Calculated by: Position Salary Variety of other factors

13 1. Promissory Estoppel 4 Elements: 1. Employer makes a promise that the employee is expected to rely upon 2. Employee relies upon the promise & does or doesn’t do something 3. Employee ordinarily would not have acted or refrained from acting had it not been for the promise 4. Employee is harmed by the employer’s failure to honor the promise

14 2. Implied Contract When an employer has said, written, or done something to lead the employee to reasonably believe that he or she is not an at-will employee.

15 3. Public Policy Tort No one should be allowed to do anything that tends to hurt the public at large.

16 4. Intentional Infliction of Emotional Distress  If the discharge of an employee caused severe mental and emotional trauma, the employee could bring a lawsuit.  Must be extremely outrageous to qualify

17 5. Implied Covenant Based on an implied promise that the employer & employee will be fair & honest with one another

18 Learning Goal To be able to identify situations that fall outside the doctrine of Employment-at- Will.

20 Learning Goal To be able to identify Employment Legislation, including Child Labor Laws

22 Taft-Hartley Act Created to equalize the power of labor and management.  Unions must provide a 60-day notice before a strike  President may stop a strike!

27 Learning Goal To be able to identify Employment Legislation, including Child Labor Laws

42 Learning Goal  To be able to recognize the difference between legal & illegal discrimination.

44 Disparate Treatment  Intentional discrimination against an individual or a group because of sex, race, color, national origin, or religion.  “ We do not hire female engineers”  “We do not hire male nurses”

46 Disparate Impact  Unintentional discrimination due to policy of employer that on the surface seems neutral, but which has an unequal & unfair impact on members of a protected group  Must weigh 150 lbs  Must be 6 foot tall

47 Business necessity  If the employer can show that a qualification is required to perform the job, then it may be permitted despite its disparate impact on a protected group

Download ppt "EMPLOYMENT LAW. Learning Goal To be able to identify situations that fall outside the doctrine of Employment-at- Will." 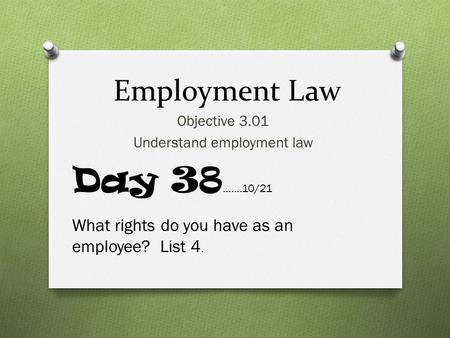 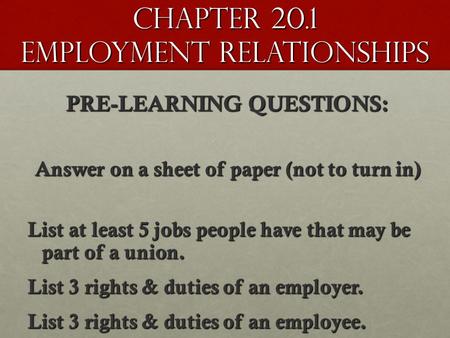 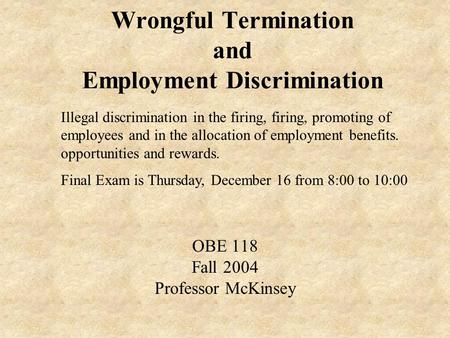 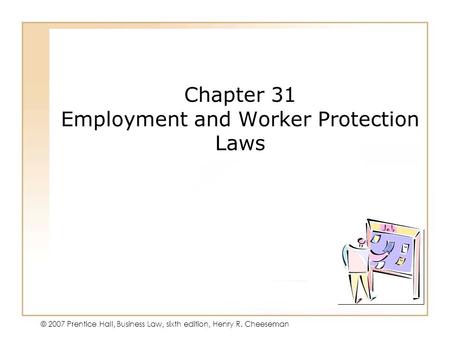 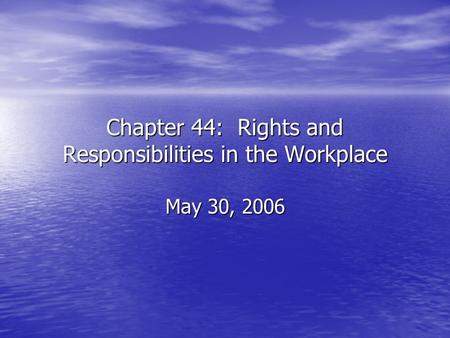 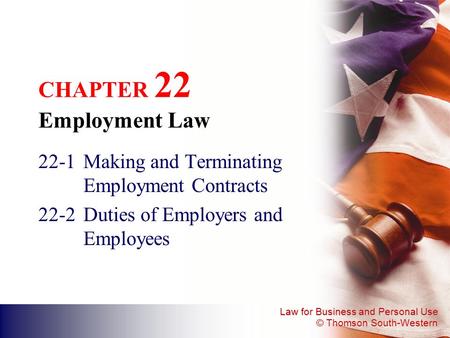 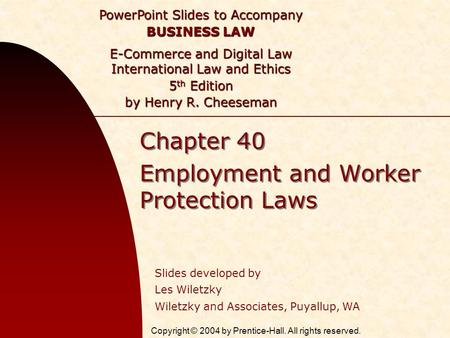 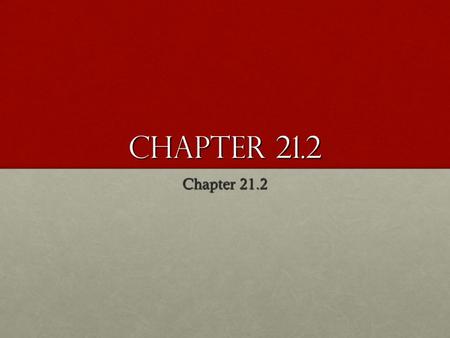 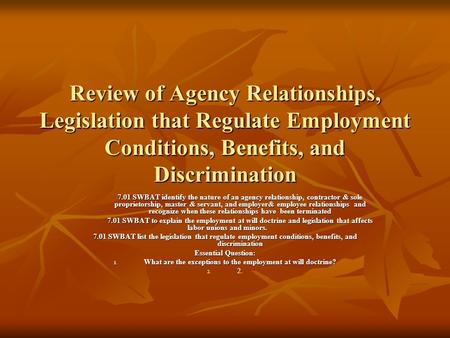 Review of Agency Relationships, Legislation that Regulate Employment Conditions, Benefits, and Discrimination 7.01 SWBAT identify the nature of an agency.