1 Reading Technical codes: The camera.
How the camera is used affects how an audience reads an image, or shot, used in a media text. What is included in the frame depends upon the distance, the angle and the movement of the camera. You should be aware of the standard terms used by film-makers to describe the choice of shots used. More importantly you must be thinking abut why these shots were used and what effect they have in creating meaning for the audience. When you make your own media texts for coursework you will decide how to use the camera to create specific effects. Get in the habit of using the correct terms from the start.

2 WIDE SHOT(WS) or VERY LONG SHOT(VLS).
Used when it is important for the audience to understand or have an idea about the setting. This shot will often establish a scene or place giving an audience context for the following action. Any figures will be very small. (photos courtesy of photolibrary wales

3 LONG SHOT (LS) In this shot any figures will be seen from head to foot. The audience will be able to identify more detail about the person or persons but will also be able to see where they are or what is going on around them. A Long Shot often follows a Wide Shot particularly if the film maker wishes to introduce a character. (photos courtesy of photolibrary wales

4 MID SHOT or MEDIUM SHOT (MS)
Now that the camera is closer to the subject the audience can easily recognise them and identify detail about what they are doing. Within the frame a person will be shown from roughly their waist to their head. (photos courtesy of photolibrary wales

5 MEDIUM CLOSE UP (MCU) This is very similar to the previous shot but the camera is a little closer to the subject and within the frame a person will be shown from their chest to their head. The difference is only slight but can create subtle effects. (photos courtesy of photolibrary wales

6 CLOSEUP (CU) This allows the camera to focus on the detail of the subject as there is little emphasis on background or setting. The frame contains the person’s head and shoulders allowing the audience to recognise a subject’s thoughts and feelings. (photos courtesy of photolibrary wales

7 BIG CLOSE UP (BCU) This shot shows just the face. It is an effective shot to use when signifying emotions or focusing on expressions. (photos courtesy of photolibrary wales

8 EXTREME CLOSEUP. (ECU) In this shot the camera seems to be extremely close to the subject. The whole frame is filled with a part of the subject. A person’s face would be shown from just below the mouth to just above the eyebrows or even closer… It can have the effect of making a person seem powerful or threatening but can also be used as a reaction shot to focus on an emotional response. (photos courtesy of photolibrary wales

9 CAMERA ANGLES OR POSITION.
As well as thinking about the distance the camera is from the subject you should also think about the position of the camera in relation to the subject. If the camera is filming from above it is possible to make individuals within a frame appear weak. Conversely, by filming them from below and emphasising their size so a subject may appear stronger. You may also identify or hear about ‘bird’s eye view’, ‘crane’ shots, ‘aerial’ shots or ‘point of view’ shots. Remember that as well as recognising where the camera was you must consider what effect is created. Each shot is constructed to create meaning…

10 LOW ANGLE SHOT. In this shot the camera is below the subject pointing upwards. It can be used to create the effect of making the subject seem overpowering, important or threatening. (photos courtesy of photolibrary wales

11 HIGH ANGLE SHOT. In this shot the camera is above the subject pointing down. It can be used to create the effect of making the subject seem vulnerable, insignificant or threatened. (photos courtesy of photolibrary wales

12 Other shots you may come across:
TWO SHOT. Any shot which has two people in it. OVER THE SHOULDER SHOT. The audience is seeing over one person’s shoulder. (photos courtesy of photolibrary wales

13 POINT OF VIEW SHOT. A shot that shows what a character is looking at

14 DUTCH ANGLE. The camera is tilted or slanted creating a feeling of unease or disturbance.The verticals or horizontals are out of line. BIRD’S EYE SHOT. The camera is looking vertically straight down at the subject. (photos courtesy of photolibrary wales

15 CAMERA MOVEMENT: Cameras are usually placed on a tripod which allows it to move around on a pivot or remain stationary. Try to recognise the various results of moving the camera in different ways. Moving the camera from left to right is called panning and is used in the same way that we look at something by moving our head. The camera can also be made to move up or down- this is a tilt. Placing tracks alongside a moving subject allows a camera to follow the action- known as tracking. Harnesses worn to counterbalance the camera and cancel operator movement keep the camera steady when following rapid movement this is known as a steadicam . You may have seen steadicam operators running along the touchline at televised football matches. 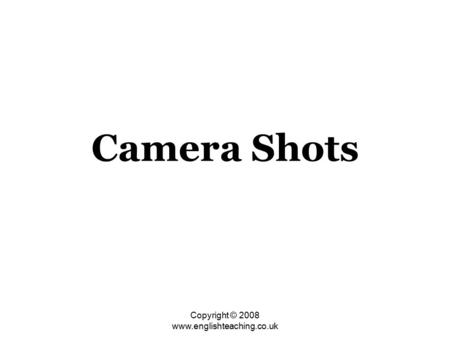 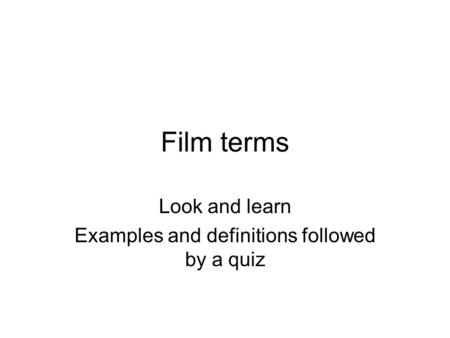 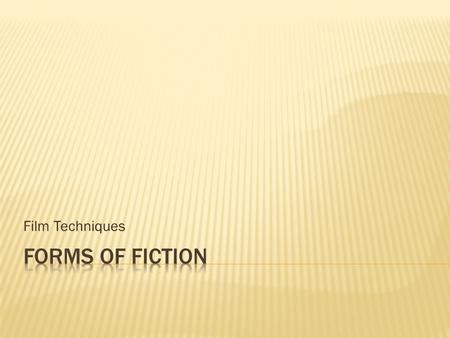 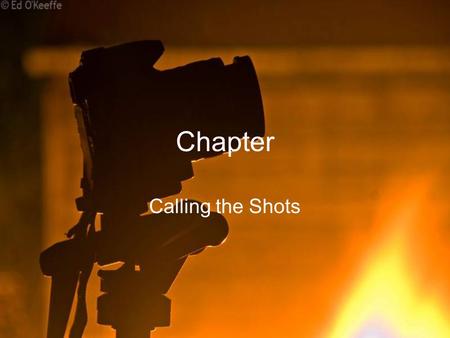