2 The Purpose of Marriage Functionalists: Explain marriage as the central social grouping to meet the basic needs in all societies “Norm” of society Many individuals feel that getting married gives them adult status within their society and family

3 Love & Marriage Social Exchange Theorists: Explain that being married will be better than being single (benefits vs. costs) The contemporary ideal in most cultures suggests that marriage is a happy state in which one can love and be loved Canadians said what they liked most about marriage was companionship, including love and support and the stability of the relationship

4 Marriage & Identity Symbolic Interactionism When people marry they acquire the status of husband, wife, spouse or life partner Marriage changes how other people see them, but it also changes how individuals see themselves Also perception that marriage is the “right” and acceptable choice to make

6 Conflict Based on power dynamic Couples have more access to supports (money and social status) Power dynamic between couple has typically been that “man wears the pants” … changing!

7 The Purpose of Marriage In the past, marriage provided legitimate access to sexual partners and ensured the bearing and raising of children Now, 90% of Canadians accept adults having premarital sex but expect to marry when they want to have children Marriage also allows individuals to share resources to improve their standard of living

8 A Legal Point of View 3 Models of Marriage in Western Society: (Justice Blair – Court of Appeal for Ontario) 1)The historical classical model emphasizes the complementary biological and social roles of men and women and views marriage as the ideal situation for raising children 2)The choice model views marriage as a private agreement between individuals, with an emphasis on self-expression of sexuality 3)The commitment model views marriage as a committed, intimate relationship based on emotional support. Although it is founded on individual choice, it focuses on connection within the community.

9 A Legal Point of View Canada currently follows the commitment model which assumes: a)emotional and financial interdependence b)obligations of mutual support c)shared social activities d)marriage is more important for raising children than for producing them

10 Marriage & Identity The commitment model is based on shared lifestyle In the past, if men or women wanted to improve their social status, they would marry someone of higher status Today, individuals who want to improve their quality of life will choose a partner who has similar goals and financial means, they will strive together to develop a higher status

11 The Timing of Marriage The timing of significant developments in life is determined by a culture’s social clock and by an individual’s readiness to make the change Canadians believe the best age to marry is 26.3 for men and 24.9 for women (2004)

12 The Timing of Marriage the average age of first-time brides was 28.5 years and for grooms was 30.5 years (2004) many Canadians cohabit before they marry, but it is not clear whether cohabitation is a cause or an effect of delayed marriage emerging adults are delaying marriage, but they are also delaying cohabitation 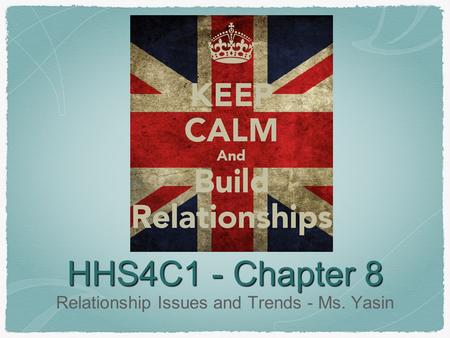