1 SCIENCE INQUIRY SC.8.N.1 Vocabulary
The Search is On / The Dropped Egg Investigation The Pendulum and Galileo

5 9. independent variable (test): the factor that you want to test
It is changed by the investigator to observe how it affects a dependent variable 10. inference: a logical explanation of an observation that is drawn from prior knowledge or experience 11. observations: the results of using one or more of your senses to gather information and taking note of what occurs 12. prediction: a statement of what will happen next in a sequence of events 13. qualitative data: uses WORDS to describe what is observed 14. quantitative data: uses NUMBERS to describe what is observed 15. science: the investigation and exploration of natural events and of the new information that results from those investigations 16. variable: any factor that can have more than one value

6 ~The Search is On~ The Dropped Egg Investigation
Over time, science has developed a general way of doing investigations and looking for explanations about happenings in the universe. This is called the scientific method or steps to scientific inquiry.

7 OBSERVE What observation led to an experiment?

8 ASK QUESTIONS What question(s) did they want to answer?

9 HYPOTHESIZE What was their hypothesis?

10 PLAN AND CARRY OUT AN INVESTIGATION
What plan did they follow?

11 ANALYZE AND INTERPRET DATA
What were the results?

12 PURPOSE EXPLANATIONS What explanation did they give for the results?

13 COMMUNICATE RESULTS How did they show the results?

14 OFFER OTHER QUESTIONS OR IDEAS
What other questions or ideas did they offer? 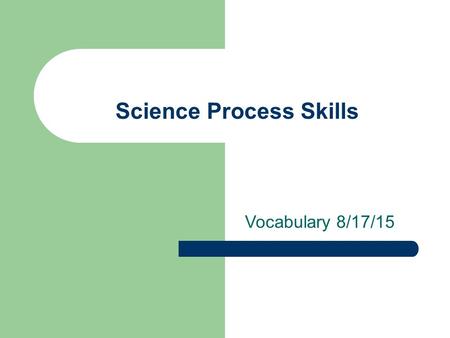 Science Process Skills Vocabulary 8/17/15. Predicting Forming an idea of an expected result. Based on inferences. 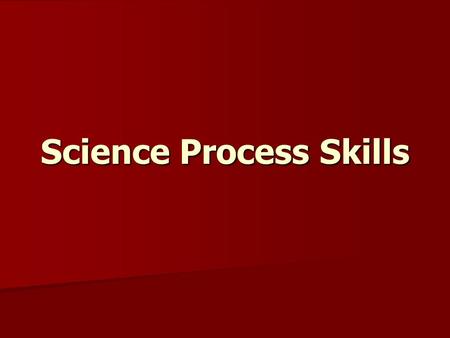