1 The Rise of Medieval Europe

4 Lesson 1 Terms 3. Charles Martel—defeated Islamic forces at the Battle of Tours, ensuring that Europe would be Christian. 4. Charlemagne – The greatest king of the Franks and the leader who provided the foundations for a modern European culture.

5 I. Merovingian Rulers During the 400’s A.D., the Franks emerged as the strongest Germanic group; their early rulers, known as Merovingian kings, held power until the early 700’s. The real impact of the Franks upon Western Europe dates from 481 A. D. when Clovis took the throne and converted to Christianity.

6 I. Merovingian Rulers Clovis converted believing that the Christian God had helped him win a battle against the Alemanni. When Clovis converted, his subjects, subsequently converted. Wars, common enough in these early times, became Holy Wars – wars to preserve the Christian faith against Heretics – and the Franks considered themselves “protectors of the faith.”

7 I. Merovingian Rulers In large measure, this explains the “christianization” of Western Europe.

8 I. Merovingian Rulers In 714 A.D., Charles Martel led the successful defense of Tours, France, against Muslim forces; this victory ensured that Christianity would remain dominant in Europe. Charles Martel’s son Pepin the Short became the king of the Franks in 752 A.D. In return for the Church’s blessing, Pepin was expected to help the pope against his enemies.

11 II. Charlemagne’s Empire
This stability was based on the bridging of three elements into one peaceful empire: 1. The Roman Past 2. The Germanic way of life 3. Christianity

12 II. Charlemagne’s Empire
When Charlemagne took power in 771 A.D., he immediately established two priorities: Expansion(map pg. 296). Unite all Germanics under one kingdom. 2. Convert all of the people in the land he conquered to Christianity.

13 II. Charlemagne’s Empire
If somebody gave you a very large gift…house, car, etc, would you be loyal to them? Charlemagne began giving his warriors land so they could support and equip themselves. This created an army of warriors who were deeply devoted and loyal to Charlemagne.

14 II. Charlemagne’s Empire
Charlemagne was a tough act to follow. When Charlemagne died in 814 A.D., his family could not hold the empire together; in 843 A.D. Charlemagne’s three grandsons agreed to divide the empire’s lands. What effects can a divided empire bring?

16 III. Invasions Increase Disunity
Outside invasions nearly destroyed the Carolingian kingdoms; the most threatening attacks came from the Vikings, raiders from Scandinavia to the north. The Vikings were explorers, skilled in sailing and trading, who settled throughout Europe

19 Why were warriors loyal to Charlemagne?
The Vikings were from…?

20 The Vikings were a factor in this new emerging social system.
2 priorities Charlemagne established when he took power in 771 AD?

21 What did the victory at the Battle of Tours ensure for Europe?
The characteristic most often associated with Charlemagne?

22 What caused Charlemagne's Empire to collapse after he died?
Who led the successful Battle of Tours against Muslim forces?

23 During the 400's AD, the Franks emerged as the most powerful…?
The real impact on the Franks was when what person took the throne and converted to Christianity? 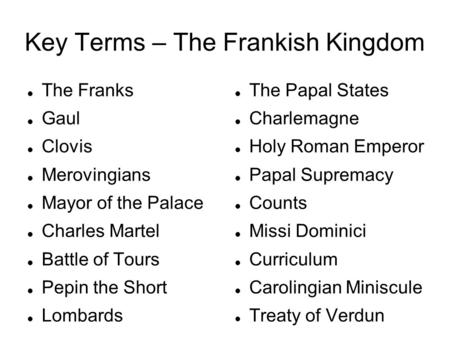 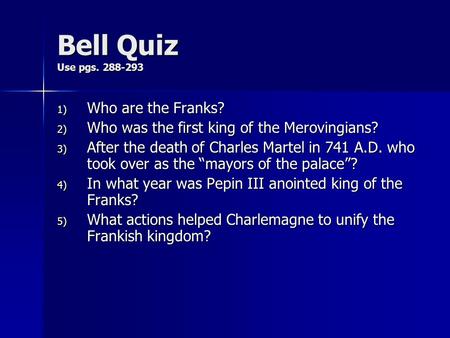 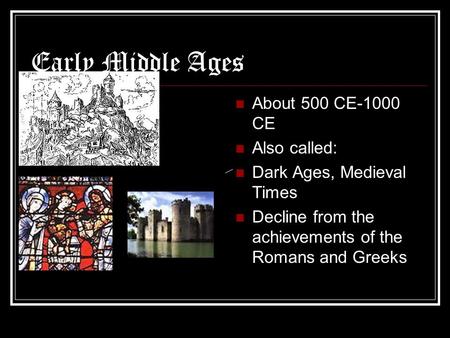