2 Learning Objectives After completing this chapter, you’ll be able to:
Define scarcity. List the four factors of production. continued

3 Learning Objectives After completing this chapter, you’ll be able to:
Identify the differences between market and command economies. Explain why most countries prefer a mixed economy.

7 Factors of Production A shortage of resources is called scarcity.
A basic economic problem for any society is how to manage its resources.

8 Factors of Production To meet the wants and needs of its people, a society must produce goods and services. The means to produce them are called economic resources, or factors of production.

10 Natural Resources The raw materials found in nature are called natural resources. Natural resources become factors of production when we use them to produce goods.

11 Natural Resources The economy of many countries is based on their natural resources.

12 Natural Resources Some resources, like wheat and cattle, are renewable. They can be reproduced. Other resources are limited, or nonrenewable, like coal, iron, and oil.

13 Natural Resources The amount of natural resources available to a society has a direct effect on its economy.

14 Human Resources The knowledge, efforts, and skills people bring to their work are called human resources, or labor.

15 Human Resources Labor can be skilled or unskilled, physical or intellectual. One of the biggest problems facing many nations today is not a shortage of labor but a shortage of skilled labor.

16 Capital Resources Capital resources are the things used to produce goods and services, like buildings, materials, and equipment.

17 Capital Resources As the wants and needs of people change, so do the needs for capital resources.

19 Entrepreneurial Resources
Entrepreneurs improve on ways to use resources, or create and produce new ones. A key to dealing with scarcity is to develop new resources and technologies.

22 Making Decisions About Production
No society has enough productive resources available to produce everything people want. Every society must, therefore, make choices.

24 Basic Economic Questions
A society makes economic choices by answering three economic questions: What should be produced? How should it be produced? Who should share in what is produced?

25 What Should Be Produced?
Deciding to use a resource for one purpose means giving up the opportunity to use it for something else.

26 How Should It Be Produced?
When a society decides what to produce, it must also address other types of questions, such as what methods will be used, how many people will work on the production, and what will be the quality of the items produced?

27 How Should It Be Produced?
The answers to these questions depend on two factors. One factor depends on how goods are to be produced. Another important factor is the quantity of available resources.

28 Who Should Share in What Is Produced?
This question focuses on the concept that people can’t get everything that they want because society doesn’t have enough resources.

29 Who Should Share in What Is Produced?
In most societies, people can have as many goods and services as they can afford to buy.

30 Who Should Share in What Is Produced?
The question arises as to how a society determines the income earned by each individual in that society?

31 Blood Is Thicker Than Oil
Occidental Petroleum Corp. is exploring for oil in Columbia. However, the U’wa people oppose oil exploration on the land they have lived on for thousands of years. For them, oil is the “blood of Mother Earth.” continued

32 Blood Is Thicker Than Oil
The problem is more complex because the Columbian government supports the oil production, which will bring development to the country. continued

33 Analyze Who has the right to the land—the U’wa people, or the Columbian government?

34 Fast Review When a society chooses to use a resource for one purpose and gives up the opportunity to use it for some other purpose, what cost is involved? continued

36 Fast Review In most countries, what determines how many goods and services a person can buy?

37 Types of Economic Systems
Economics studies how society chooses to use resources to produce and distribute goods and services for people’s consumption.

38 Types of Economic Systems
To use its limited resources effectively, every nation needs an economic system.

39 Types of Economic Systems
The primary goal of an economic system is to provide people with a minimum standard of living, or quality of life.

40 Types of Economic Systems
The two basic and opposing economic systems that have been developed are: Market economy Command economy

41 Market Economy In a market economy economic decisions are made in the marketplace according to the laws of supply and demand.

42 Market Economy The Market and Prices
Price is the amount of money given or asked for when goods and services are bought or sold.

43 Market Economy The Market and Prices
Demand is the amount or quantity of goods and services that consumers are willing to buy at various prices.

45 Market Economy The Market and Prices
Supply is the amount of goods and services that producers will provide at various prices.

46 Market Economy The Market and Prices Demand and supply work together.
When the quantity demanded and the quantity supplied meet, the price is called the equilibrium price.

48 Market Economy The Market and Prices
A market economy is also called capitalism, or private enterprise. In a capitalist system, resources are privately owned.

49 Market Economy The Market and Prices
In a capitalist system, the primary role of government is to support the marketplace by removing obstacles such as trade barriers.

57 Command Economy There are two types of command economies.
In a strong command economy, such as communism, the state makes all the economic decisions.

58 Command Economy In a moderate command economy, also called socialism, there is some form of private enterprise.

59 Command Economy The primary advantage of a command economy is that it guarantees everyone an equal standard of living.

60 Command Economy There are some disadvantages to a command economy.
Since the state provides all goods and services in a strong command economy, there is little choice of what to buy.

61 Command Economy Another disadvantage to the command economy is that there is no incentive for entrepreneurship when you can’t run your own business.

65 Fast Review What are the advantages and disadvantages of a command economy and a market economy?

66 What are some examples of renewable and nonrenewable resources?
continued

68 Why do you think other countries are interested in buying corn-burning appliances?
continued

69 In a command economy, how might a limit on the availability of corn affect the people?

71 Business Building Blocks Interpreting Line Graphs
The left side of a graph is the vertical axis. The bottom of the graph is the horizontal axis. continued

73 Business Building Blocks Interpreting Line Graphs
When the dots on the graph are connected, they form a line whose location and direction reveals information about change through time. continued

74 Business Building Blocks How to Interpret a Line Graph
Read the title of the graph Read the label on each axis Understand the numbers on each axis, including the interval used continued 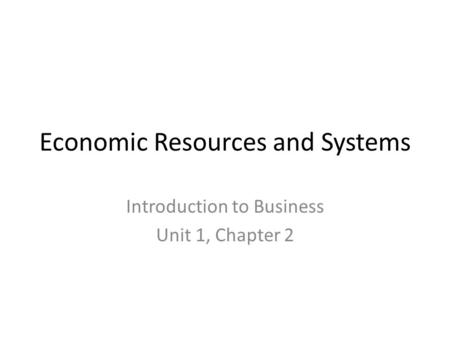 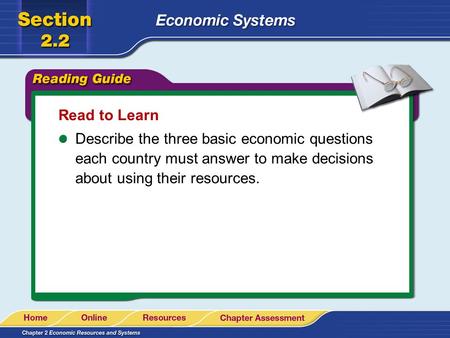 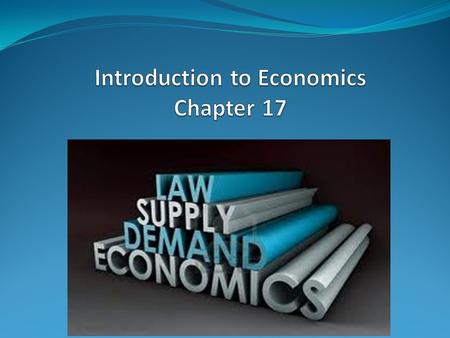 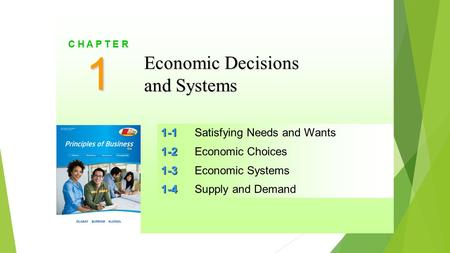 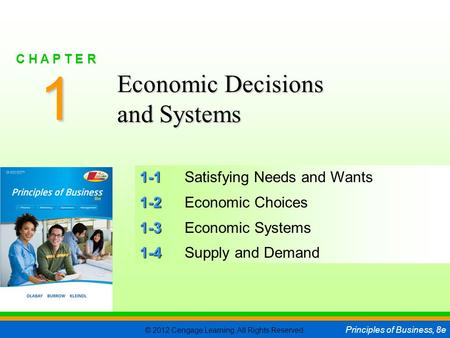 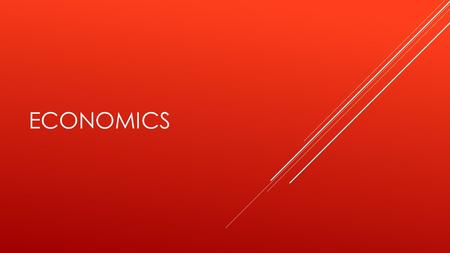