Presentation on theme: "Summary Leads. Hard news stories typically use a summary lead This is a “no nonsense” lead Just the facts…and fast! Uses an “inverted pyramid” to tell."— Presentation transcript:

2 Hard news stories typically use a summary lead This is a “no nonsense” lead Just the facts…and fast! Uses an “inverted pyramid” to tell the story

5 Inverted Pyramid If a story is written in inverted pyramid format, the editor can simply trim the story one paragraph at a time, going from the bottom up, until the story is the right length. The editor can do so confidently, knowing that even though information is being cut from the story, it is being cut in ascending order of importance.

6 Inverted Pyramid Information crucial to the story, the who, what, where, when, why, and sometimes how, known as the Five Ws, should appear in the first three or four sentences.

7 Rules for Writing a Lead Rule #1: A straight news lead should be a single paragraph consisting of a single sentence, should contain no more than 35 words, and should summarize, at minimum, the most newsworthy "what," "where" and "when" of the story.

9 Rules for Writing a Lead Rule #2: The lead's first verb should express the main "what" of the story and should be placed among the lead's first seven words.

11 Rules for Writing a Lead Rule #3: The lead's first verb -- the same one that expresses the main "what" of the story -- should be active voice, not passive voice.

14 Rules for Writing a Lead Rule #4: If there's a "who" involved in the story, the lead should give some indication of who the "who" is.

15 Rule #4 Example "An elderly Moscow man died Monday when an early morning fire raged through his Main Street home." – The "who" is "an elderly Moscow man." – In this case, the "who" probably isn't someone whose name readers would recognize. – As a result, the "who" angle of the lead focuses on what things about the "who" might make the "who" important to the reader. In this case, it's the fact that the man was older and lived in Moscow. That's called writing a "blind lead." The man's name will be given later in the story.

16 Another Example “Moscow Mayor Joe Smith died Monday when an early morning fire raged through his Main Street home." – Smith is the local mayor, and most readers probably will recognize his name. – As a result, the lead gives his name.

17 Rules for Writing a Lead Rule #5: The lead should summarize the "why" and "how" of the story, but only if there's room. These details will often be described in subsequent paragraphs

19 Rules for Writing a Lead Rule #6: If what's in the lead needs to be attributed, place the attribution at the end of the lead

20 Rule #6 Example "Faulty wiring most likely sparked the blaze that claimed the life of an elderly Moscow man last week, the city's arson investigator concluded Monday." – Attribution is simply a reference indicating the source of some bit of information. – In this case, the attribution is the phrase, "the city's arson investigator concluded Monday."

22 Writing the Lead How do you know what aspect of your lead is most important? In other words, should you lead with the “who,” “what,” “when,” “where” or “why?” Which of these details most strongly meets the definition of news criteria? In other words, why is the story interesting or relevant?

23 Example A fire erupted If the fire originated at the home of a celebrity, then the WHO becomes significant

24 So what!!! Use the “so what” test to help you write your lead Why should a reader care about the story?

25 Multiple-Element Leads If there are multiple elements that are all equally significant, then you might use a multiple-element lead To pull this off, you will need to construct a clear, simple sentence that captures the highlights of these multiple developments

26 Multiple-Element Leads Example: – “A flash fire that swept through a landmark downtown hotel Saturday killed at least 12 persons, injured 60 more and forced scores of residents to leap from windows and the roof in near-zero cold.” – Note that the verb phrases used within this sentence are parallel (“killed,” “injured” and “forced”)

28 In-Class Exercise Go to a news web site (theledger.com, nytimes.com, washingtontimes.com, etc.) Identify the nut graph and lead in four articles by copying and pasting them into a Word doc. Work in groups of 2.

Download ppt "Summary Leads. Hard news stories typically use a summary lead This is a “no nonsense” lead Just the facts…and fast! Uses an “inverted pyramid” to tell." 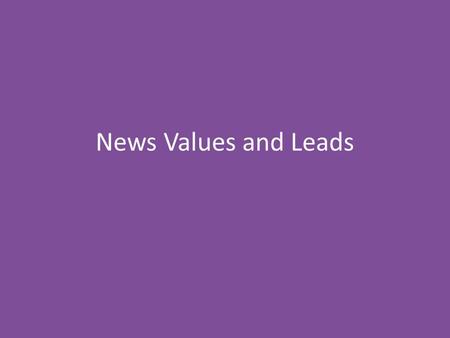 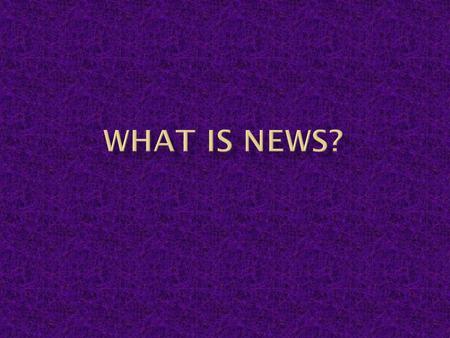 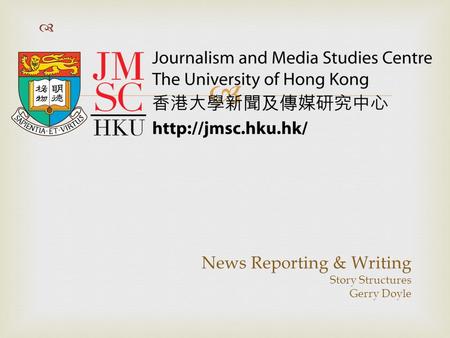 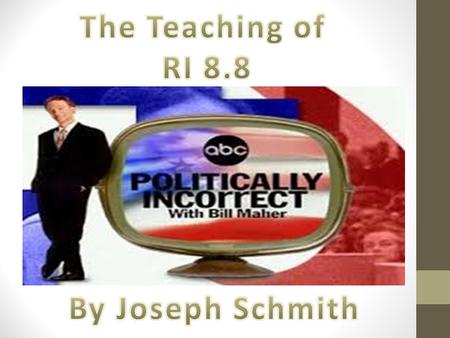 The Teaching of RI 8.8 By Joseph Schmith. 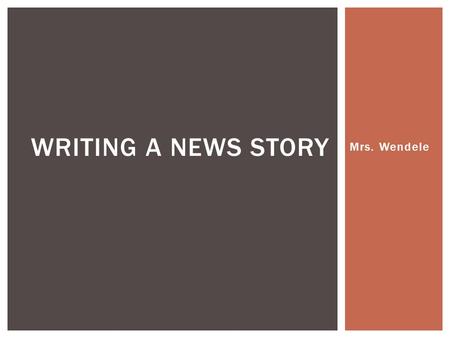 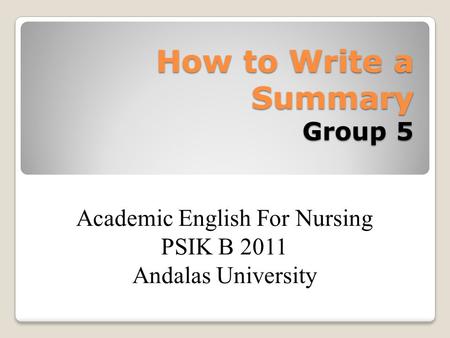 How to Write a Summary Group 5 Academic English For Nursing PSIK B 2011 Andalas University. 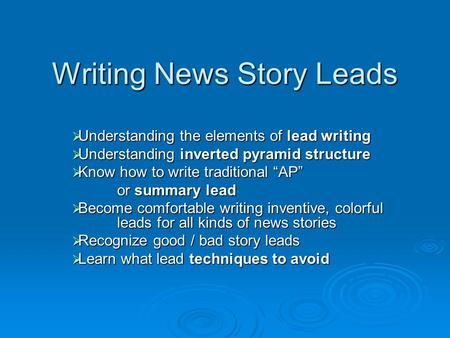 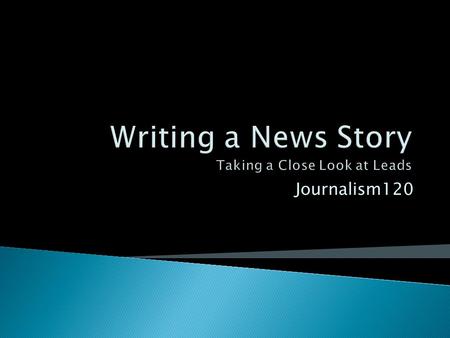 Journalism120. Michael Jordan, John Lennon, Malcolm X, Bugs Bunny? It seems that no one is immune from being a young man’s hero. Lights shine and sirens. 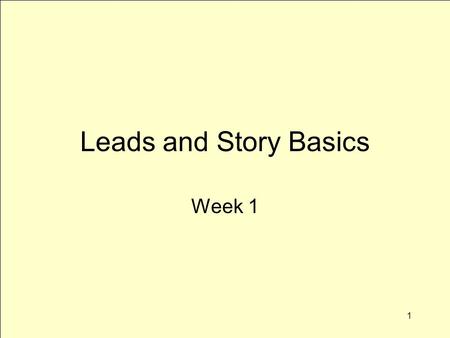 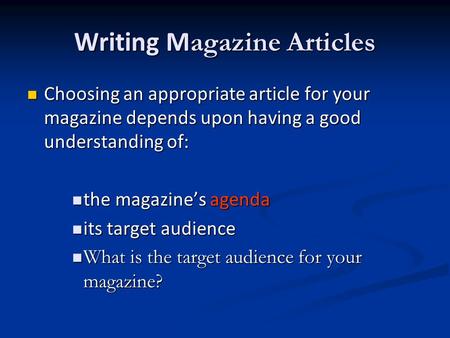 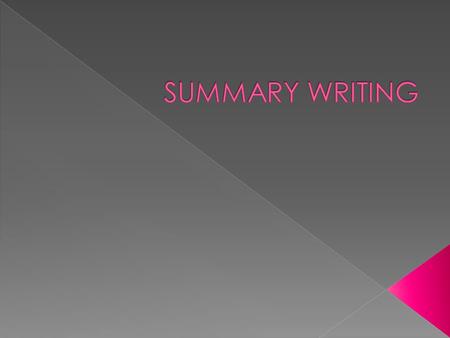 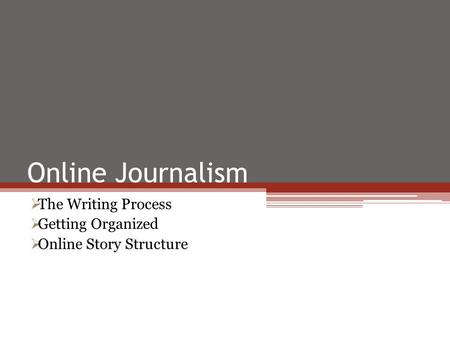 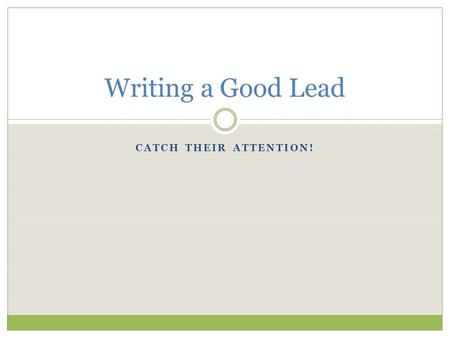 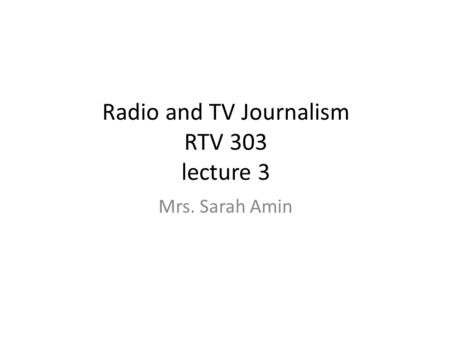 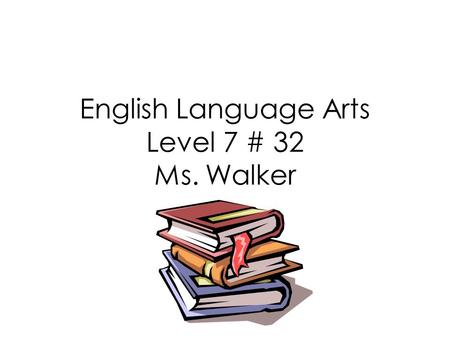