Presentation on theme: "What is an article? An article is an adjective."— Presentation transcript:

3 What is an article?

4 An article is an adjective.

8 The is used to refer to specific or particular nouns.

9 A/an is used to modify non-specific or non-particular nouns.

12 The first time you speak of something use "a or an",

14 The next time you repeat that object use "the".

15 The house is quite old and has four bedrooms.

16 I ate in a Chinese restaurant.

17 The restaurant was very good.

19 Compare a and the in these examples A man and a woman were sitting opposite me. The man was American but I think the woman was British. When we were on holiday,we stayed at a hotel.Sometimes we had our dinner at the hotel and we sometimes went to a restaurant.

21 This morning I bought a newspaper and a magazine. __ newspaper is in my bag but I don’t know where I put __ magazine.

22 This morning I bought a newspaper and a magazine. The newspaper is in my bag but I don’t know where I put ___ magazine.

23 This morning I bought a newspaper and a magazine. The newspaper is in my bag but I don’t know where I put the magazine.

25 This morning I bought a newspaper and a magazine. The newspaper is in my bag but I don’t know where I put the magazine. I saw an accident this morning. A car crashed into a tree.The driver of the car wasn’t hurt but the car was badly damaged. My friends live in an old house in a small village.There is a beautiful garden behind the house.I would like to have a garden like that.

26 a/an is used before a singular noun which is uncountable. I need a visaThey live in a flat. He bought an ice-cream.

28 A/an is not used.It is omitted: Before plural nouns An eggeggs Before uncountable nouns Before names of meals,except when these are preceded by an adjective. We have breakfast at eight. We had a good breakfast. The article is also used when it is a special meal given to celibrate something or in someone’s honour; I was invited to dinner. I was invited to a dinner given to welcome the new ambassador.

30 We use the when it is clear which thing or person we mean.

31 We use the when it is clear in the situation which thing or person we mean.For example,in a room we talk about the light/the floor/the ceiling/the door/the carpet etc. Can you turn off the light,please?(the light in this room) I took a taxi to the station.(the station in that town)

33 WE DO NOT USE THE WITH: television breakfastlunchdinner

41 PLURAL NAMES We use the + plural names of countries/islands/mountains: the Netherlandsthe Canary Islands the Philippines

42 SEAS,RIVERS ETC. We use the +names of oceans/seas/rivers/canals: the Atlantic Oceanthe Mediterranean Sea the River Nilethe Suez Canal the Black Seathe Amazon

Download ppt "What is an article? An article is an adjective." 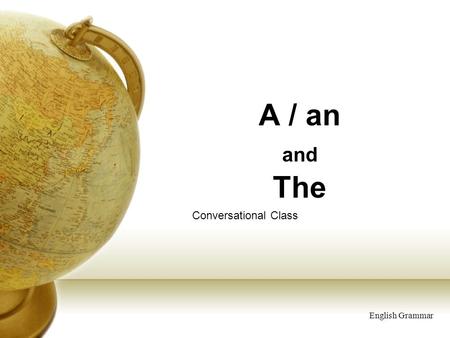 A / an and The Conversational Class English Grammar.