4 Effective Rainfall Rainfall component causing perceptible change in the stream flow That is only a portion of the total rainfall recorded over the catchment Rainfall that does not infiltrate the soil and moves into the stream as overland flow Infiltration capacity: High in dry soil No overland flow if precipitation is lower than infiltration capacity (but interflow may occur). With persistence precipitation , the soil becomes wet and infiltration rate decreases causing runoff. 4

5 Flood/Storm Frequency
Flood frequency: number of times a particular flood/storm can be expected in a river/watershed in a given number of years Example: 100 year flood – a flood that can be expected once in 100 years. (usually worked out by extrapolating the observed data) Frequency is the percentage of years, during which a storm of a given magnitude may be equaled or exceeded Recurrence interval/return period: Time interval after which a similar flood can be forecasted or expected. Return Period: Time interval after which a storm of given magnitude is likely to recur.

6 Frequency Analysis Objective: to develop a frequency curve
Precipitation frequency curves can be developed to evaluate maximum events Used for planning water resources structures Relationship between the magnitude of events and either the associated probability or the recurrence interval Weather systems vary year to year and hence magnitude of future events can not be predicted accurately Have to rely on statistical analyses of rainfall amounts over certain period Frequency distribution of past events Probability or likelihood of having certain events occurring over a specified period is estimated Source: Hydrology and the management of watersheds By Kenneth N. Brooks

7 Recurrence Interval of a Storm
Number of years within which a given storm may equal or exceed once - Also known as return period Means this precipitation value or more than that occurs m times in n years Ranking: The serial number of a specific value of precipitation in the descending order . Source: Hydrology Principles

8 Probability of Exceedance
The probability of occurrence of a flood (having a recurrence interval T-year) in any year, Probability: Reciprocal of the return period p = 1/ T Example source: Elementary Engineering Hydrology By Deodhar M. J. Frequency: Inverse of return period multiplied with 100 and expressed as %.

9 Frequency Frequency: Probability expressed in terms of percentage
Frequency of a rainfall of a given magnitude = the number of times the given event may be expected to be equaled or exceeded in 100 years Example source: Elementary Engineering Hydrology By Deodhar M. J. Frequency: Inverse of return period multiplied with 100 and expressed as %.

12 Hydrology and Management of Watershed by Kenneth.
Frequency curve of daily rainfall for a single station The probability of having a 24 hr rainfall event of 100mm or more in any given year is about 0.02 (or a 50 year recurrence interval)

14 The percentage probabilities of floods (or rainfall) of different recurrence intervals (T) to occur in particular periods (N) are given in Table 8.4 Source: Hydrology Principles

16 Intensity Duration Curve
Graph of duration vs. intensity for an area Normally follows the following equation Where; I = intensity in mm/hr t = duration in minutes C, a, b = constants for the specific area Also known as intensity duration graph. Source: Elementary Engineering Hydrology By Deodhar M. J.

23 Depth-Area-Duration (DAD) Analysis
Average depth of storm and its duration for a specific area Also called DAD study Horton’s Equation Pa =Poe-(KA)^n Areal spread of rainfall within watershed. Amount of high rainfall that may be expected over the catchment. Frequency analysis discussed before is based upon rainfall characteristics at a point or a specific location. The design of storage reservoir and other water resources related structures required that the watershed area to be taken into account. Because rainfall is usually not uniform, increasing the area of watershed the depth of rainfall with a certain probability will decrease. Every storm has a center having maximum precipitation. Po= maximum precipitation at the center of storm. Pa=Average Precipitation over a specific area. (Po-Pa) is positive value and its value increases with bigger catchment and decreases with smaller catchment. K & n are regression constants varies with duration of storm.

28 Index of wetness Ratio of rainfall in a given year and average annual precipitation When it is Less than 1 - bad year/deficient year/ dry year More than 1 – good year / surplus year / wet year Equal to 1 – normal year Source: Deodhar chapter 4

30 Probable Maximum Precipitation (PMP)
Assumed physical upper limit of rain that will fall over a specified area in a given time (that’s physically possible) Rainfall for a given area and duration that can be reached or exceeded under known meteorological conditions Used to provide an estimate of the Probable Maximum Flood (PMF) hydrographs For design of major structure with the threat of loss of life PMP is used (where no risk of failure accepted) Source: usf Amount of rainfall over a region that can not be exceeded over at that place. The greatest depth that can occur in a given duration at a given location Higher in hot humid regions. PMP is obtained by studying all the storms that have occurred over the region and maximizing them for the most critical atmospheric conditions (assuming maximum air moisture and maximum air inflow occurs simultaneously) . PMF estimated after appropriate adjustment for infiltration losses.

33 Solution to example Source: Hydrology and the Management of Watersheds by Brooks 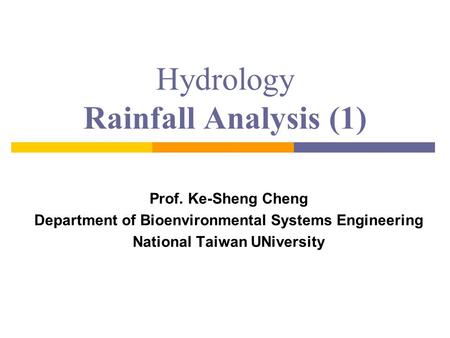 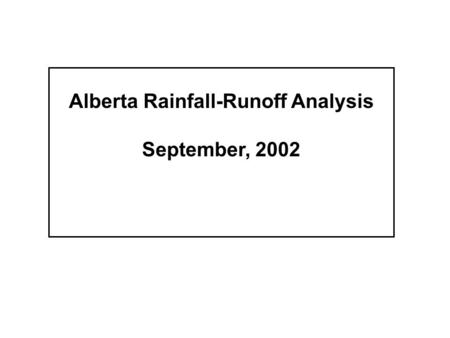 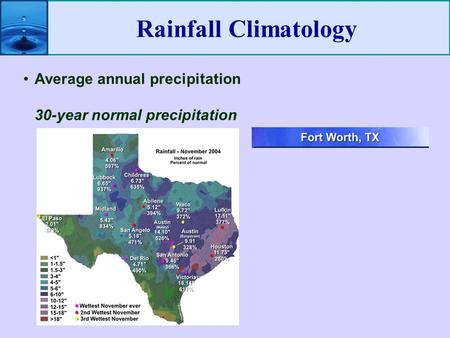 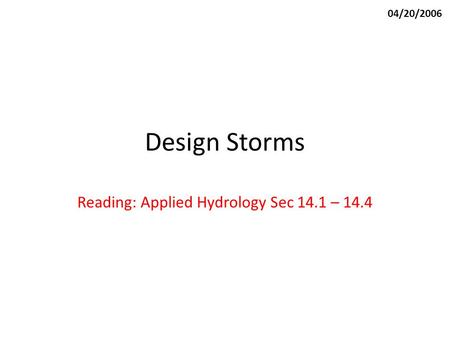 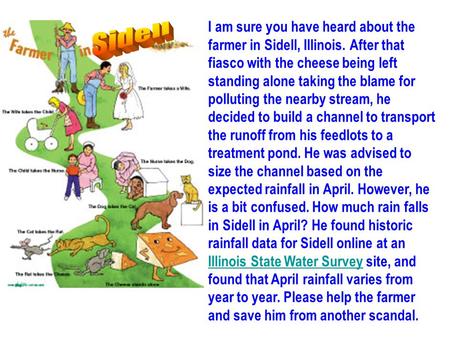 I am sure you have heard about the farmer in Sidell, Illinois. After that fiasco with the cheese being left standing alone taking the blame for polluting. 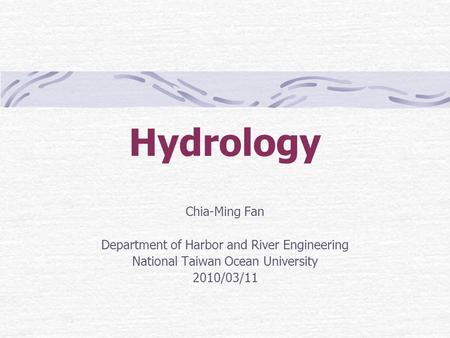 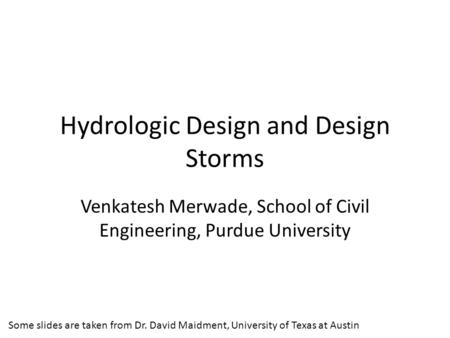 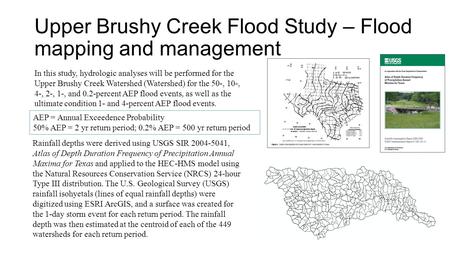 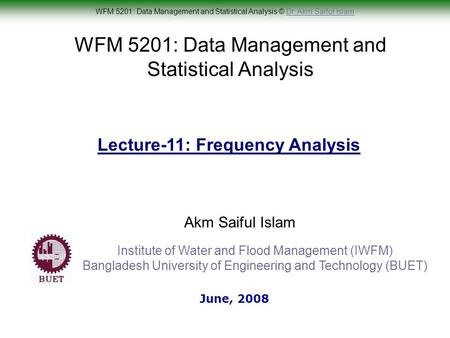 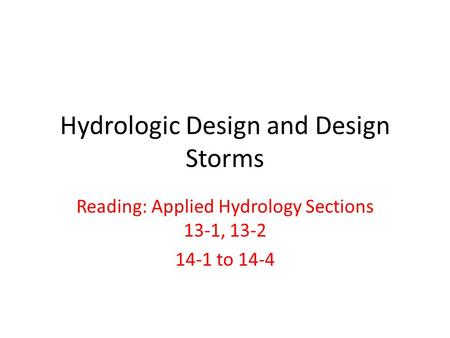