1 Comparative Models of Urban Systems
How are cities organized?

2 What type of city is London?
There were a hundred thousand shapes and substances of incompleteness, wildly mingled out of their places, upside down, burrowing in the earth, aspiring in the earth, moldering in the water, and unintelligible as in any dream. - Charles Dickens on London in 1848 London today: Canary Wharf, Croydon Miami/Fort Lauderdale :Kendall Boca Raton, Wilton Manors, Deerfield Beach, Pembroke Pines Hallandale Beach Canary Wharf[1]Croydon[2]

4 Purpose of Urban Models
To understand why cities are spatially organized in various ways, geographers have developed models that explain and predict the internal structures of cities. Most focus on patterns of internal growth in U.S. cities.

6 The Growth of Dublin Like all cities throughout the world, Dublin has grown over a long period of time. We will now examine some different stages in Dublin’s growth.

7 The Growth of Dublin Viking Dublin
Dublin began as a Viking settlement. Like many other Viking settlements, Dublin was an ideal place at the mouth of a river. From here the Vikings could trade. The Anglo-Normans The Normans occupied Dublin in They built stone walls around the city. Dublin became a Medieval city with narrow streets. Poor sanitation caused many deaths. The 16th-18th Centuries Dublin was extended and many new streets were added in a grid-iron pattern. Parks like St. Stephen’s Green were made and Georgian Houses were built.

9 The Growth of Dublin The 19th Century
After 1800 many of the wealthy people who lived in the Georgian houses left Dublin. Landlords bought these tenements and rented rooms to families. There was huge overcrowding in these tenement buildings and poverty and disease were widespread. The Dublin docklands became an important source of work. Dublin became a distribution centre. Goods were distributed throughout Ireland along the canal and railway lines. The 20th Century Dublin grew rapidly in the 20th century. The inner city slums were cleared and people moved out to new suburbs like Ballyfermot, Crumlin, and Finglas. Newer suburbs were then developed around the villages of Clondalkin, Lucan and Tallaght.

10 MIAMI Miami is home to one of the largest ports in the United States, the Port of Miami. It is the largest cruise ship port in the world. The port is often called the "Cruise Capital of the World" and the "Cargo Gateway of the Americas” As of 2011, the Port of Miami accounts for 176,000 jobs and has an annual economic impact in Miami of $18 billion. It is the 11th-largest cargo container port in the United States. In 2010, a record 4.33 million passengers traveled through the Port of Miami. One in seven of all the world’s cruise passengers start from Miami

11 Employer No. of Employees
MIAMI-DADE COUNTY PUBLIC SCHOOLS 48,571 <3 MIAMI-DADE COUNTY 29,000 UNITED STATES GOVERNMENT 19,500 FLORIDA GOVERNMENT 17,100 UNIVERSITY OF MIAMI 16,100 BAPTIST HEALTH SOUTH FLORA 13,376 JACKSON HEALTH 12,576 PUBLIX 10,800 AMERICAN AIRLINES 9,000 FLORIDA INTERNATIONAL UNIVERSITY 8,000 MIAMI DADE COLLEGE 6,200 PRECISION RESPONSE CORPORATION 5,000CITY OF MIAMI 4,309 FLORIDA POWER AND LIGHT COMPANY 3,840 CARNIVAL CRUISE LINES 3,500 Most are tertiary jobs?? The Mayaimi (also Maymi and Maimi) were a Native American people who lived around Lake Okeechobee (the Belle Glade culture area) in Florida from the beginning of the Common Era until the 17th or 18th century. The group took their name from the lake, which was then called Mayaimi, which meant "big water" in the language of the Mayaimi, Calusa, and Tequesta tribes

12 Functional Zones in Cities
Each model of the city, regardless of the region, is a study in functional zonation—the division of the city into certain regions (zones) for certain purposes (functions). Zones of the city exist and play certain roles in the city's life, whether to house residents, produce goods, educate students, or accommodate government. Each zone or region is part of the larger city. city.Each of these zones has a different function or use. The following zones can be seen in most cities; 1. A Central Business District (CBD) 2. Some smaller shopping areas 3. A number of shopping centres 4. Industrial areas 5. Open space for recreation / leisure

13 The following zones can be seen in most cities:
1. A Central Business District (CBD) 2. Some smaller shopping areas 3. A number of shopping centres 4. Industrial areas 5. Open space for recreation / leisure

14 What city is this ? The city of Paris protects the old city from development of high rises. Instead, Paris concentrates skyscraper development in the technology corridor called La Defense, which is located along the axis of the Avenue Charles de Gaulle a little over 3 miles from the Arc de Triomphe.

17 Invasion and Succession
Burgess’ Concentric Zone model assumes a process called invasion and succession (succession migration) A series of migration waves, with one group moving in and establishing itself. New arrivals to cities tend to move first into the inner rings, near the CBD. Eventually people and economic activities in the center are pushed out into farther rings

18 Homer Hoyt (1939); criticized Burgess Model as too simple & inaccurate
Urban land use and growth are based on transportation routes and linear features like roads, canals, railroads, and major boulevards. Not just concentric zones around the CBD. Still has strong CBD According to this model- Many factories and industrial activities follow rail lines. Lower socioeconomic housing follows lines of public transportation. Sectors that service visitors are located along major highways. ITS ALL ABOUT TRANSPORTATION in the late 1930s, Homer Hoyt published his sector model (Fig. 9.22B), partly as an answer to the limitations of the Burgess model. Hoyt focused on residential patterns, explaining where the wealthy in a city chose to live. Hoyt argued that the city grows outward from the center, so a low‐rent area could extend all the way from the CBD to the city's outer edge, creating zones that are shaped like a piece of pie. Hoyt found that the pie‐shaped pieces describe the high‐rent residential, intermediate rent residential, low‐rent residential, education and recreation, transportation, and industrial sectors.

23 Primate cities in developing countries are called megacities when the city has a large population, a vast territorial extent, rapid in‐migration, and a strained, inadequate infrastructure. For example, Mumbai, India, has more people than the country of Australia. São Paulo, Brazil, covers more land than the country of Belgium. Kinshasa, The Congo, is the fastest growing city in Africa. Jakarta, Indonesia, is the largest city in the world without a subway or metro system. 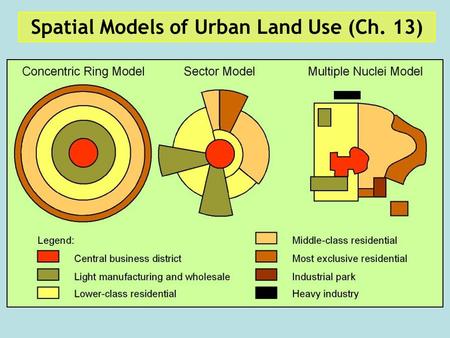 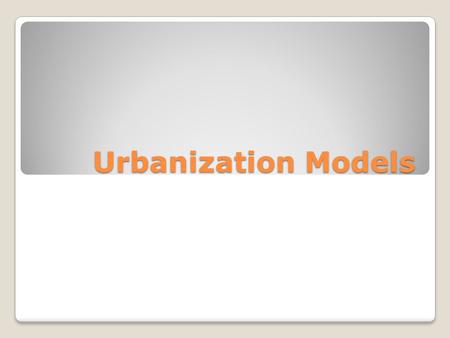 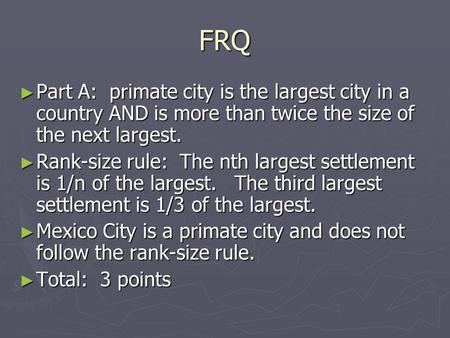 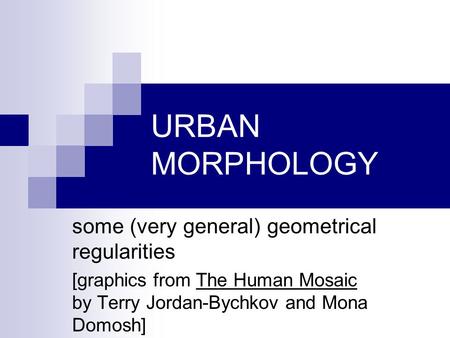