2 Overview The sun is the ultimate source of all energy on earth. The sun’s warmth and light produce solar energy. More energy from sunlight strikes Earth in an hour than all the energy consumed on the planet in a year. Passive use of solar energy involves directly capturing its warmth and light through building design. Active use happens by using technology to transform the sun’s energy into heat and electricity. Photovoltaic cells change sunlight into electricity and are often used in remote areas not connected to the electric grid. Solar power plants generate electricity as the heat from solar thermal collectors is used to create steam to power a generator There are many different ways to use solar energy: To heat water directly To generate electricity through the production of steam To produce electricity to power a vehicle. Off grid in remote areas Stand alone uses such as street signs

3 Advantages After initial installation cost the source is free and unlimited. Using solar energy produces no air or water pollution except for the production of silicon used in the conductors It can be produced without being connected to the utility grid such needs as satellites, remote locations and ocean vessels Facilities can operate with little maintenance or intervention after initial setup. Tops of parking garages are a great example of possible locations.

4 Disadvantages The amount of sunlight that arrives at the earth's surface is not constant. It depends on location, time of day, time of year, weather conditions, and pollution. Grids can only handle between 10-20% of intermittent renewables without requiring storage. When not enough electricity is generated by the sun, users can buy power from the utility grid and sell to them when they produce more than they need. The initial cost is higher than is currently used for fossil fuels. Manufacturing the photovoltaic cells consumes silicon and produces some waste products. Amount of land required for a solar power plant is high Large solar thermal farms can harm desert ecosystems if not properly managed.

7 Economic considerations
On a bright, sunny day, the sun shines approximately 1,000 watts of energy per square meter of the planet's surface, and if we could collect all of that energy we could easily power our homes and offices for free. an installed PV system will cost somewhere around $9 per peak Watt. Due to economies of scale solar panels will get less costly as people use and buy more — as manufacturers increase production to meet demand, the cost and price is expected to drop in the years to come.

8 Legal regulatory considerations
There are federal and state financial incentives in the form of investment subsidies and tariffs to allow the solar industry to get established.

9 Anticipated status New technologies are being developed
to store energy. for smart grids that can control the flow of electricity. Future space-based solar electricity programs have potential because the technology is already being used in satellites. Using public land for the creation of renewable energy is a viable consideration.

10 Summary Solar energy is one of the best sources of energy to relieve our use of fossil fuels. The creation of a smart grid will make it more practical. In combination with wind energy it will be able to provide at least 30% of our energy needs within the next 40 years. 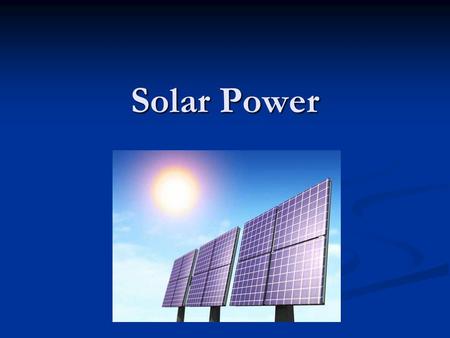 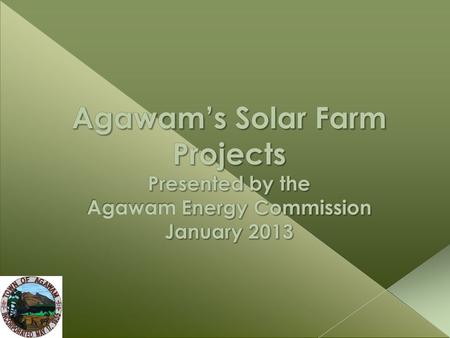 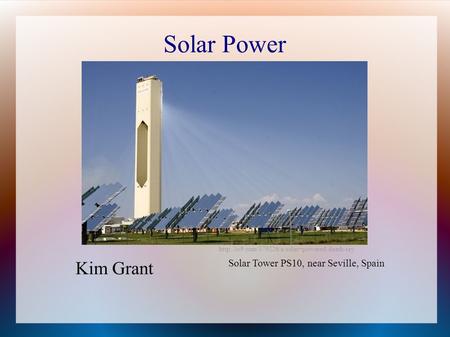 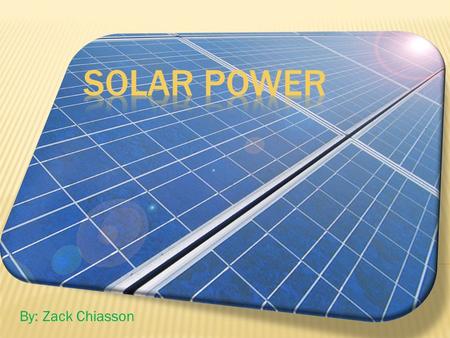 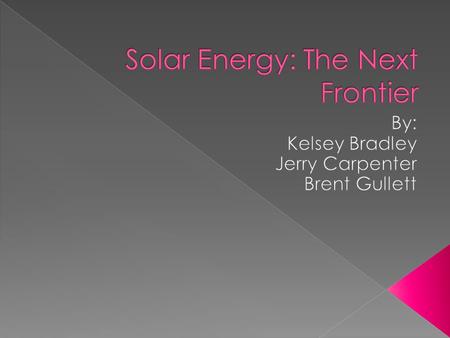 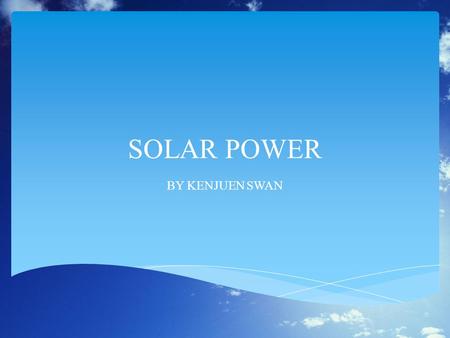 SOLAR POWER BY KENJUEN SWAN.  Solar energy is radiant light and heat from the sun harnessed using a range of ever-evolving technologies such as solar. 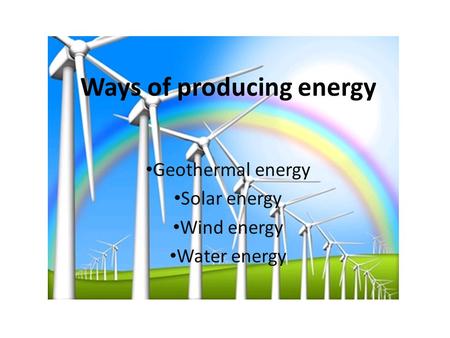 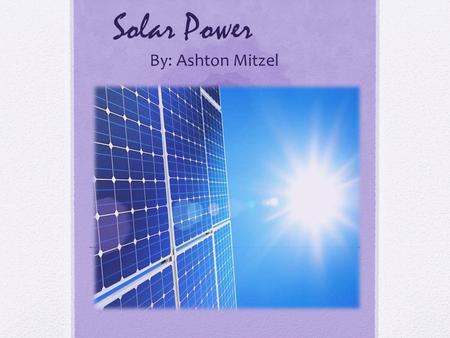 Solar Power By: Ashton Mitzel. History  1876  founded that when selenium is exposed to light it creates electricity, without using any heat or movement. 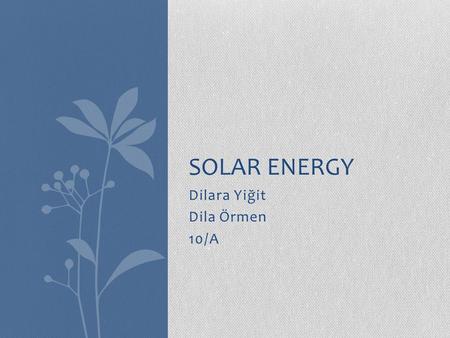 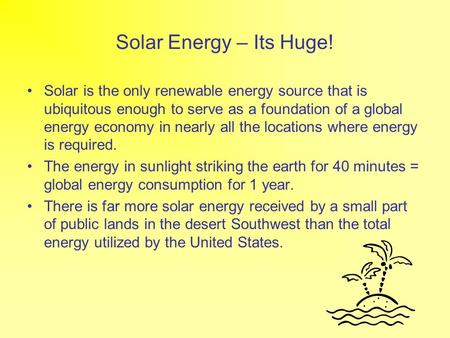 Solar Energy – Its Huge! Solar is the only renewable energy source that is ubiquitous enough to serve as a foundation of a global energy economy in nearly. 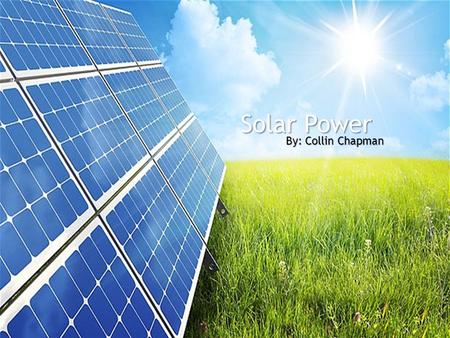 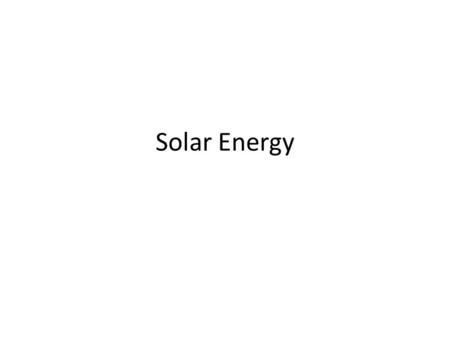 Solar Energy. The sun produces energy through nuclear fusion At the basic level, the nuclei of hydrogen atoms fuse together to create helium atoms. Helium. 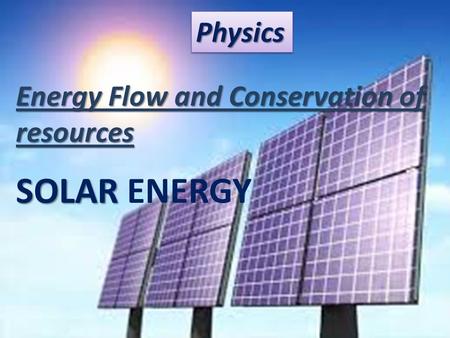 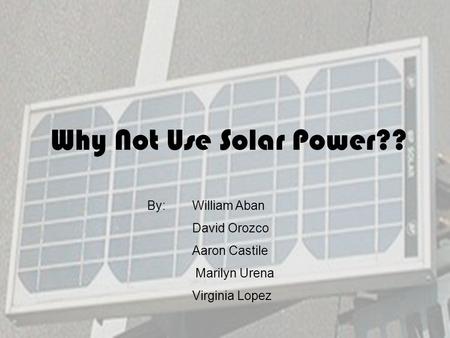 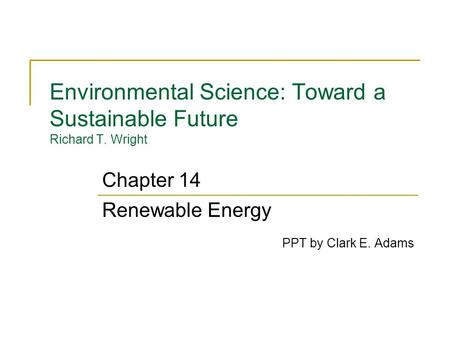 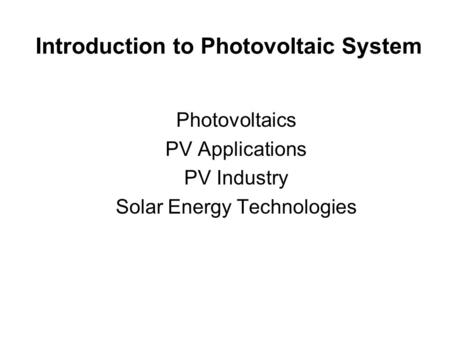