2  Ludwig van Beethoven played an important role in the transition of eras. (jpg. 1)  His music was inspiring, essentially tragic, compelling, and often times breathtaking; giving it a feeling of romance and power.  The music he composed was different from that of other famous composers in the way it was composed, played, and the way that it sounded.  He composed music that had emphasis and power despite the great odds that he faced in his life.  Beethoven also had many instructors throughout his life that formed him into the great musician and composer we know today.  Ludwig van Beethoven changed the course of musical history.

10 Symphony No. 5 Fist Movement 0:00Exposition: The famous four-note Motive in C Minor, short, short, short, long notes (long note is at the discretion of the conductor) with two statements followed by pauses. Opening is played very loudly (ff), included were the strings and clarinets, then repeated lower. 0:07Strings play the opening motive, soft (p), Motive is played by each instrument sequentially. 0:15There are louder chords that crescendo and violins have a high sustaining note, while the pitch changes the rhythm continues. There is a continuation of the repeating of the opening four- note motive 0:43French horns play the opening motive in ff, key changes from C minor to E flat major, very soothing before it builds and increases with speed, still keeping with the 3 short, 1 long 1:13Woodwinds and French horns together descend quickly using the four-note motive rhythm played at the beginning. 1:25The entire first exposition is repeated, key changes back from E flat to the opening of C minor, pause as the exposition ends before the next piece begins.. 2:50Opening motive with horns ff followed by strings descends to p using the basic motive. There is a sway between woodwinds and strings leading to powerful repeating chords. 3:22Development: Horn call with four-note motive of violins in forte, almost like a swaying motion with motive extended. 3:50Cascades into motive loudly (ff), followed by an oboe playing a short solo. 4:22The motive uses the whole orchestra, violins playing softly (pp) and flute play as the clarinet joins. Then the whole orchestra joins again. 4:35Recapitulation: The main theme returns in minor. 4:40Transition where strings develop the opening motive, gradually crescendo using the whole orchestra ff, followed by a sudden stop. Then the horns play the opening motive ff.

11 Continued… 5.02Melody is soft alternating of the violins and flutes. Clarinets, bassoons, and French horns, bassoon brings a darkness to the piece, but is followed by a lighter mood. It then halts the motive followed with timpani. 5:23The melody is passed back and forth several times between strings and woodwinds, crescendo as it makes its way to the Coda, there is a definite feeling of change, almost as if the first movement would end here. The scale is raised to give a more major tone. 5:58Coda: The timpani maintains the intensity in the rhythm with repeating chords from lower strings plays against the violins. Notes from the bridge motif are played by lower strings and woodwinds while violins are complimenting with rhythm twice as fast. A horn call, using lower strings and bassoons with a violin melody playing p. 6:29Almost sounds like the piece will begin as the start of the first movement. Notes are sequenced downward with strings and woodwinds while the violins hold the rhythm. 6: 41Ending, a new theme in music with strings, a short repeating of the 3 short note sequence that returns back to the four-note motive loudly using the entire orchestra. Suddenly is played pp with strings and woodwinds. Moves back to the entire orchestra ending ff with notes played at staccato.

12 Second Movement 0:00First Theme: The movement starts off with Theme A, A-flat major with a triple meter with violas and cellos, accompanied by bass in pizzicato. Woodwinds bring a rich feeling 0:26Melody continues with woodwind and alternates woodwinds and strings. The short, short, short, long notes are continued in this movement. 1:00Second Theme: is also stated in A-flat major with violas. With a four-note motive that is the same as the first. pp the clarinets come in with a rising theme. The brasses hold out the note longer. 1:15Clarinet theme is taken over by the violins with a crescendo to brass ff; violins come in with the same theme softly with slow chords. 1:42Violas and cellos play briefly in triple meter, variation is played smoothly. 2:00The first theme is played with violas and cellos playing a triple meter played smoothly. 2:14The melody goes back to the first theme of the second movement with a smooth rhythm with long notes from the clarinet. 2:47Theme B presents, the brass play the theme with excitement. Soft strings and bassoons play, the cello adds a different accompaniment similar to the first movement. There is a change from triplet to quadruplet arpeggios. Clarinets play again with a slight change in notes from the violas. 3:05The clarinet is more pronounced, but ends with the chords playing pp and quickly repeats notes by the cellos. 3:39Violins play with clarinets and bassoons in the background helping the violins, but violins carry this section. Fermata ending with strings and woodwinds, seems to act as a bridge to bring the section back together later. 4:15The theme goes back to the first theme of the second movement still smooth notes that pass from the clarinet to the bassoon and to the flute. Violins repeat the melody softly and take over. 4:34Flute and oboe play in harmonic thirds, clarinets play. Flute and oboe ascend while clarinets descend, clarinets then ascend while flute and oboe descend. Instruments play a chord progression. 4:47Melody is played by cellos and basses, pronounced, with powerful repeating chords. Two rising scales that lead to a note an octave higher is held. Changes from legato to staccato as horns play big fanfare.

13 Continued… 5:12It suddenly becomes pp repeating the string chords and the beginning theme is played by the clarinet then bassoon then flute, followed by a woodwind. The triplet and quadruplet notes compliment this segment and allows for flow to the next section. 5:22The oboe and flute play together while clarinets play. The clarinet ascends while the oboe and flute descend counteracting each other. The horns speed up and play staccato. 5:41Flute and oboe play before strings take over and go into a crescendo, skipping rhythm which is done in staccato, violins are still in the background playing melody. The melody become homophonic. 6:12The basses in the second theme of the movement loudly with timpani. After the strings play softly the woodwinds play staccato. A change from A-flat minor to A-flat major in preparation for the Coda. 7:00Coda: The tempo increases with a bassoon playing quietly accompanied by strings. The violins and cellos play upward then return to a slow tempo to end the theme. A scale plays moving from each instrument. 7:34There is a soft overture from the orchestra changing the piece from A-flat major from a-flat minor. 7:51Playing in a flat major, violas, cellos, and basses rise quickly ff. Soft chords bring the entire orchestra together to end the movement.

15 Symphony No. 5 (cont.) YouTube - ‪ Beethoven's 5th Symphony ‬‏  The first performance of Symphony No. 5 was in Vienna’s Theater an der Wien in 1808.  It’s popularity was hindered because of this performance Performed in the cold month of December Theater was cold due to budget cuts Not enough rehearsal time due to the cold The audience was freezing during the performance  Symphony No. 5 was performed again a year and a half later and was well received at that time.

16 Nature as an Influence Beethoven was inspired by the beauty of nature and its influence on his world and emotions. Symphony No. 6 was inspired by nature. Beethoven was the first composer to give a name to each movement of this symphony, these names were meant to help the listener imagine a scene as the music was played. Symphony No. 6 was also known as Pastorale Symphony, meaning a simple country life.

17 By the age of 28 Beethoven began to notice a hearing loss. The beginnings were minimal and had little effect on his music. For Beethoven it started with being unable to hear the church bells in the distance. His hearing deteriorated rapidly, by the time he was 50 Beethoven was completely deaf.

18 Beethoven’s deafness did not stop him from composing. He continued with his work and wrote some of the world’s greatest and moving music and never heard a single note. His deafness caused great sadness and depression and influenced the pattern of his music. Symphony No. 9 is an example of how his deafness influenced his music. Beethoven used a chorus of singers in this work. (jpg. 5)

19  Beethoven learned to adapt to his deafness, he never learned to accept it.  As age progressed he became more violent, moody, and unpredictable.  Beethoven contemplated suicide.  He adapted by cutting off the legs to his piano and placed it on the floor in order to feel the vibrations.  The music was full of passion and sadness. (jpg. 13)

23 Many descriptive words can be used to describe Ludwig van Beethoven: 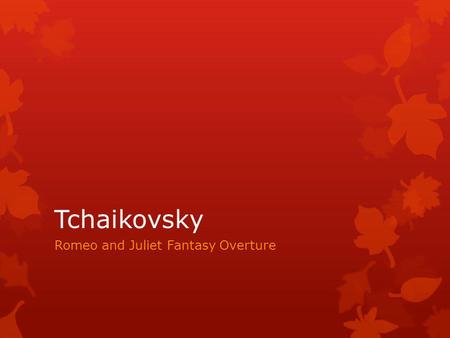 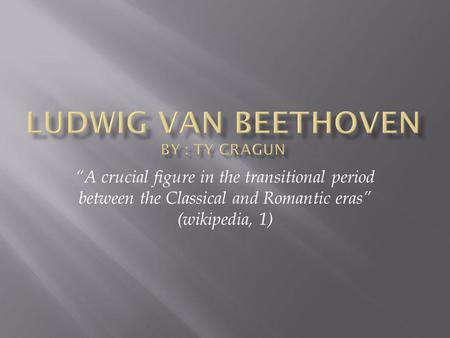 “A crucial figure in the transitional period between the Classical and Romantic eras” (wikipedia, 1) 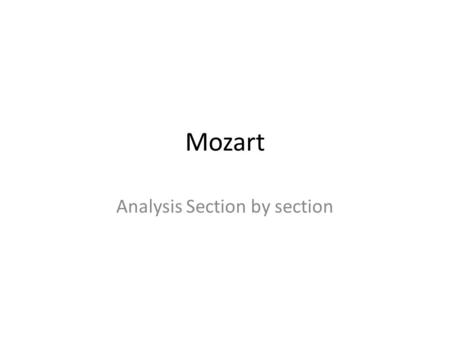 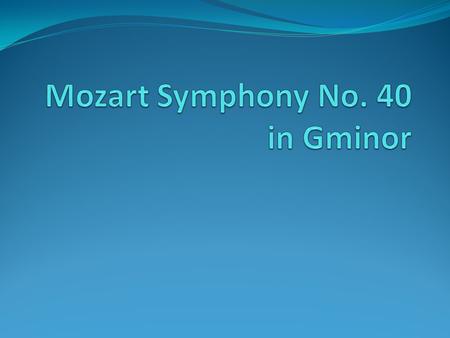