Presentation on theme: "Section 1 The Land Vocabulary Contiguous~ referring to areas that touch or share a boundary. Urban~ related to a city or densely populated area. Megalopolis~"— Presentation transcript:

3 Vocabulary Contiguous~ referring to areas that touch or share a boundary. Urban~ related to a city or densely populated area. Megalopolis~ area in which neighboring urban areas blend into one “super city.” Rural~ relating to the country side not the city. Coral Reef~ low-lying ocean ridge made of coral.

4 Places To Locate Appalachian Mountains~ curving west along the Atlantic Coastal Plain. Mississippi River~ large river system in the central United States that flows southward into the Gulf of Mexico. Great Lakes~ lie in the northern part of the central lowlands.

10 The Interior Plains ~ The central part of the country’s landscape is the Interior Plains. ~ The eastern region of these plains is called the Central Lowlands. ~ This area includes thick forests, broad river valleys, rolling flatlands, and grassy hills. ~ The largest group of freshwater lakes in the world are the Great Lakes.

11 Cont. ~ They lie in the northern part of the Central Lowlands. ~ The 5 lakes are: 1)Lake Superior, 2)Lake Michigan, 3)Lake Huron, 4)Lake Erie and 5)Lake Ontario millions of years ago. ~ In the Interior Plains region lie the Great Plains, a broad, high area.

14 The Pacific The Pacific Ocean forms the western border of the United States’ landscape quilt. Near the coast lie are two major mountain ranges: The Sierra Nevadas and the Cascade Range. Like the Rockies, these mountain ranges were formed by plate movements.

15 Continued Melting of these plates created volcanoes and lava flows, which formed the Cascade Range. West of the pacific mountain ranges are coastal lowlands and fertile valleys. Alaska and Hawaii are part of the Pacific region. Glaciers, islands, and bays line Alaska’s southern border.

16 Continued Central and southern mountain ranges are broken up by lowlands and plateaus. Mount. McKinley is North America’s largest mountain. It is 20,320 feet high. The Hawaiian Islands were formed by eruptions from volcanic mountains on the Ocean floor. Some of the islands have coral reefs.

17 Climate Tropical climates, mid-latitude climates, and high latitude climates are all found in the United States. The country’s size, changing elevations, and the flow of ocean and wind currents create the variety of climates.

18 Mid-Latitude Climates Most of the United States lies in mid- latitude climate regions. Winters in this area are cold and moist; summers long and hot. The southeastern United States has a humid subtropical climate which winters are mild and cool, and summers are hot and humid. In this region thunderstorms and tornados are common.

19 Continued The area along the Pacific coast from northern California to southeastern Alaska has a marine west coast climate. Temperatures are mild there all year round, and has plenty of rain fall. Southern California has a Mediterranean climate of dry, warm summers and rainy, mild winters.

20 Dry Climate 1. A dry climate prevails in the plateaus and basins between the Pacific mountain ranges and the Rockies. 2. Hot, dry air gets trapped here when the Pacific ranges block humid ocean winds. 3. Summers here tend to be hot and dry, and winters very cold.

Download ppt "Section 1 The Land Vocabulary Contiguous~ referring to areas that touch or share a boundary. Urban~ related to a city or densely populated area. Megalopolis~" 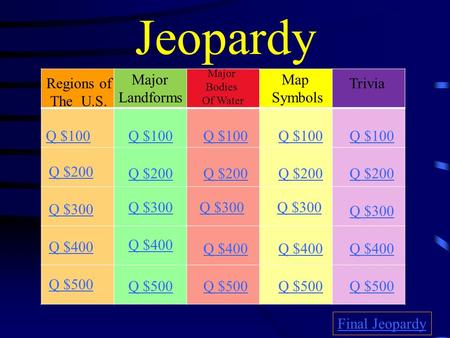 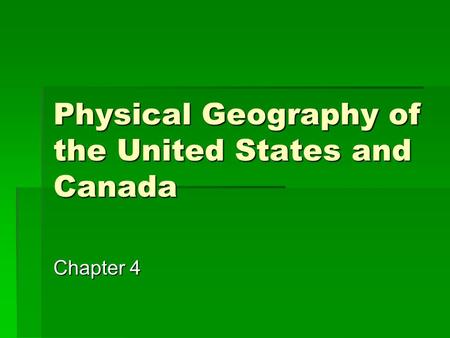 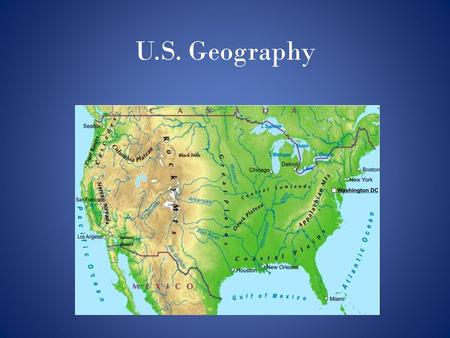 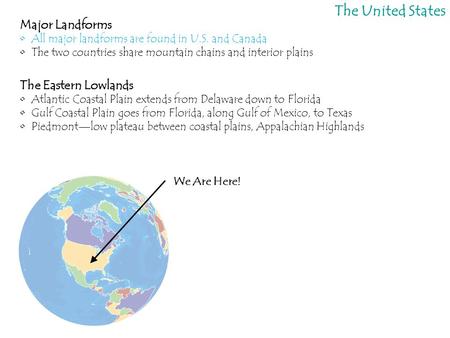 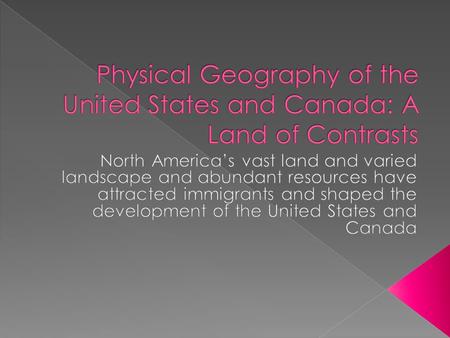 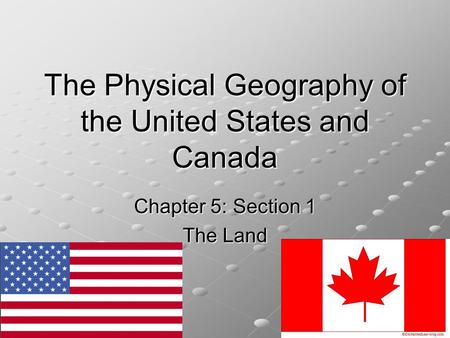