2 Shi Huangdi Shi Huangdi – China’s first emperor. In 1974, several farmers were digging a well for trees when they discovered some terra cotta, a reddish type of pottery. Below the pottery they found terra cotta soldiers. When all was finished, archaeologists found 6000 life like soldiers guarding the tomb of Shi Huangdi.

6 The Qin Dynasty Shi Huangdi’s dynasty lasted only two generations, although he said it would last for 10,000 generations. Before the rule of Shi Huangdi, China was divided into several warring kingdoms. Shi conquered these kingdoms to unite China.

7 China’s First Emperor Shi Huangdi’s original name was Zhao Zheng. He ruled the Qin people, who lived in China’s western border. By 221 BC, Zheng ruled over most of the land that makes up modern day China. The name Shi Huangdi means “First Emperor.” Because Qin is sometimes spelled Chin, the name China comes from the Qin Dynasty.

8 Strengthening the Empire Shi Huangdi sought to strengthen China through strong and harsh rule. Shi first wanted to protect China from its enemies. Shi ordered what was the largest construction project in Chinese history. It is now the Great Wall of China. There had been smaller walls but he decided to connect them. He ordered hundreds of thousands of workers to help out. The project took 10 years. Over time, it stretched to over 4500 miles.

12 Organizing the Government To help put down rebellions within the empire, Shi Huangdi put thousands of farmers to work building roads. The roads allowed the army to rush to any area where an uprising was forming. Shi killed or imprisoned any local ruler who opposed him. He divided China into districts, ruled by officials.

13 Economic and Cultural Improvements Shi Huangdi declared that one currency – type of money, be used throughout China. The new currency was a round coin with a square hole in the middle. Shi also ordered the creation of common measurements, improved writing, and issued a code of law.

14 Restricting Freedoms Shi Huangdi also tried to control the thoughts of his people. In 213 BC, he outlawed the ideas of Confucius and other thinkers. He required people to learn the philosophies of Qin scholars. Qin scholars believed that bad behavior should be punished. Sometimes enforcing behaviors were brutal. Shi had all books in China burned except for those about medicine, technology, and farming. Many scholars protested so he killed them all.

15 End of a dynasty Shi’s death in 210 BC was followed by four years of chaos and civil war that ended with the murder of his son. Power then passed to Shi’s grandson, but he failed to hold China together. A new dynasty would take power, the Han Dynasty.

17 Wudi: Warrior Emperor In 140 BC, Liu Bang’s great-grandson, Wudi, came to power. Under Wudi – Han Dynasty reached its greatest power. He took power when he was 15 and ruled for 50 years. Wudi’s main concern were war and military matters. He made improvements to the Great Wall and strengthened the army. He also expanded China’s territory.

18 End of the Han Empire The great emperor Wudi died in 87 BC. China’s stability continued under later Han emperors, but not for long. A series of young rulers, one was only 100 days old, caused the Han Dynasty to decline. It eventually fell and China slipped back into a number of smaller kingdoms. 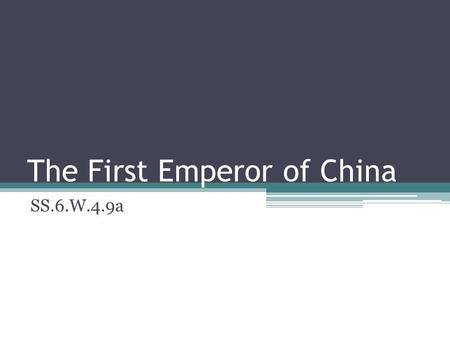 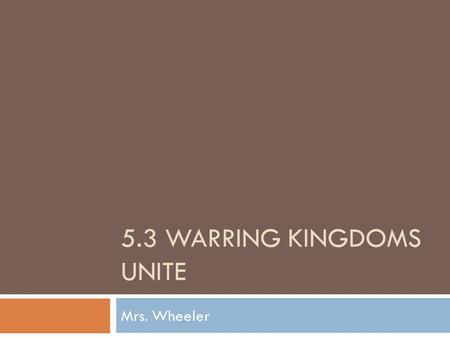