5 Solar Energy Solar energy is energy from the Sun.
As the Sun’s energy heats the Earth, it causes circulation in Earth’s atmosphere and oceans. Global winds and ocean currents occur due to solar energy.

6 Solar Energy People use solar cells to actively collect energy from the sun. Solar energy is clean and inexhaustible, but it does have some disadvantages. Solar cells don’t work very well on cloudy days, and they do not work at all at night.

7 Energy from Wind Windmills can be used to generate electricity. When a large number of windmills are placed in one area for the purpose of generating electricity, the area is called a wind farm.

8 Energy from Wind Wind energy is nonpolluting and free, does little to harm the environment, and produces no waste. The disadvantage is that only a few regions of the world have winds that are steady and strong enough to produce electricity.

9 Energy from Water Electricity produced by water power is called hydroelectric energy. To generate the electricity, a large dam is built to retain water. As the water is released, its force powers generators that make electricity.

10 Energy from Water Hydroelectric power has disadvantages. When dams are built, upstream lakes fill with sediment and downstream erosion increases. Wildlife habitats can be damaged when areas are flooded.

11 Energy from the Earth Energy obtained by using hot magma or hot, dry rocks inside Earth is called geothermal energy. Geothermal energy is the same type of energy that causes volcanoes to erupt or water to shoot up as geysers.

12 Energy from the Earth Bodies of magma heat large reservoirs of groundwater. Geothermal power plants use steam from the reservoirs to produce electricity.

13 Renewable Energy Resources
Energy resources that can be replaced in nature or by humans within a relatively short period of time are referred to as renewable energy resources. Biomass energy is energy derived from burning organic materials such as wood, alcohol, and garbage.

14 Renewable Energy Resources
Wood is the most widely used biomass fuel. Burning wood has disadvantages. Gases and small particles pollute the air when wood is burned. When trees are cut down, natural habitats are destroyed.

15 Renewable Energy Resources
In some areas, alcohol and garbage are being used to generate energy.

16 Conservation Recycling is using old materials to make new ones.
By reducing our use of resources, reusing resources whenever possible, and recycling resources, like aluminum, we can conserve our natural resources. (The 3 R’s) 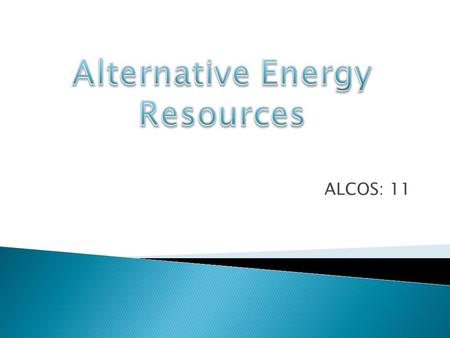 ALCOS: 11. Pros: 1. One of the best things about solar energy is that it doesn’t produce pollution. 2. Solar energy is renewable, because it comes. 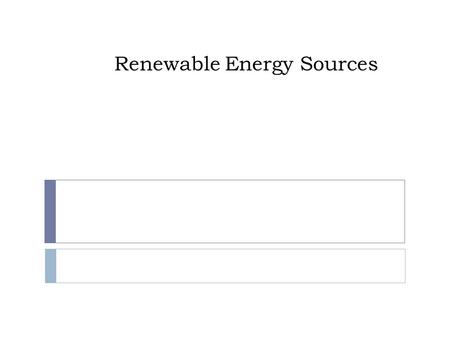