2 Declining Profits Thanks to new technologies, farmers had opened up the Great Plains and were producing a much larger supply of grain Grain supply ↑ = Grain prices ↓ Farmers were earning LESS

4 The Money Supply To fund the Civil War, the government had flooded the market with paper money (“greenbacks”) Supply of $↑ = Value of $↓ (inflation)

5 3 Types of Money After the Civil War, the government had three types of currency in circulation: Greenbacks Gold & Silver coins Bank notes (essentially paper money issued by banks) backed by government bonds (loans taken out by the government); the bank notes could be cashed in at a future date for “real” government issued gold and silver

6 Government Fights Inflation
In 1873, the US Treasury stopped printing greenbacks AND stopped minting silver coins to reduce the money supply and stop inflation The government also started paying off its bonds to reduce the number of bank notes in circulation The response was too strong and reduced the money supply too greatly Supply of $↓ = Value of $↑ = Prices ↓ (deflation)

9 The Grange To organize the poor farmers of the South and Midwest and give them a more powerful political voice, U.S. Department of Agriculture official Oliver Kelley organized “The National Grange of the Patrons of Husbandry” in 1867 By 1874, the “Grange,” as the group had come to be nicknamed, had over 1 million members

11 Farmers’ Cooperatives
Grangers also created farming cooperatives where they pooled farmers’ crops and kept them off the market in order to limit supply and drive up prices By working together, farmers could also negotiate better shipping and warehousing rates

14 The Sherman Silver Purchase Act
In 1890, Congress did authorize the US Treasury to purchase 4.5 million ounces of silver per month to be used to put more money into circulation Still, this wasn’t enough to ease deflation, so it didn’t actually help farmers

15 The People’s Party Founded in 1890, more commonly called the Populist Party Western farmers decided that the changes needed to help farmers required a new pro-farmer political party Southern farmers opposed this third-party because it might weaken their beloved Democratic Party (which was supporting Jim Crow laws across the South)

16 The Omaha Platform The Populist Party presented their political platform at a rally in Omaha Nebraska in 1892 The Platform called for the unlimited coinage of silver at a ratio of 16 oz. of silver to equal 1 oz. of gold (this idea of circulating both gold and silver coinage was known as bimetallism) It also called for federal takeover of railroads, a graduated income tax, and tighter government regulation of banking and other industries relied on by farmers

17 A Populist Candidate for President
At the Omaha Convention, the Populists nominated James B. Weaver to run for President of the United States Weaver came in a distant 3rd place in the election with only 22 electoral votes, but it was still a strong showing for a 3rd party candidate and was particularly worrisome for the Democratic Party

18 The Panic of 1893 When two large railroad companies were forced into bankruptcy in 1893, it triggered a collapse of the banks who had loaned those railroads money The ensuing Panic of 1893 was the worst economic crisis the US had experienced to that point, resulting in 18% unemployment

19 Treasury Crisis The Panic of 1893 also caused investors to cash in their government bonds for gold, draining the US gold reserve Congress responded to the run on gold by repealing the Sherman Silver Purchase Act, effectively stopping people from trading in their lower-value silver for gold

20 Goldbugs vs. Silverites
The repeal of the Sherman Silver Purchase Act split the Democratic Party into two factions: Goldbugs believed that US currency should be backed exclusively with gold Silverites believed that coining unlimited silver would ease the economic crisis

21 Election of 1896 For the 1896 presidential election, Populists wanted to nominate a candidate who supported silver, but Democrats beat them to the punch Faced with either supporting the Democratic candidate and giving up their 3rd party status or nominating their own candidate and splitting the pro-silver vote, the Populists chose to support the Democrats

23 The “Cross of Gold” Speech
“Having behind us the producing masses of this nation and the world, supported by the commercial interests, the laboring interests and the toilers everywhere, we will answer their demand for a gold standard by saying to them: You shall not press down upon the brow of labor this crown of thorns; you shall not crucify mankind upon a cross of gold.”

24 Bryan’s Campaign Bryan toured the country for weeks, giving hundreds of speeches Bryan won strong support in the West and South, but not from city-dwellers (who didn’t care about the silver issue) or from Catholic immigrants (who didn’t like his Protestant minister style speeches) In the end, Bryan could not win enough support to win the election and the hopes of farmers were again dashed

25 Gold in Alaska The discovery of gold in Alaska (which had been purchased by the US from Russia in 1867 for $7.2 million) in 1898 massively boosted the nation’s gold reserves and effectively ended the silver debate, leading to the decline and collapse of the Populist Party 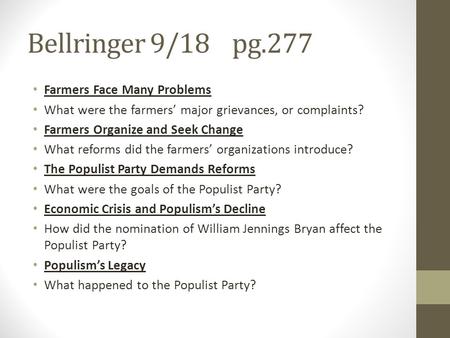