2 The UN Framework Convention on Climate Change
192 Parties – near universal membership The ultimate objective of the Convention: change is inevitable, but pace and intensity must be managed so that people and ecosystems can adapt. Principle of common but differentiated responsibilities and respective capabilities: developed countries must take the lead Annual meetings of all Parties at the Conference of the Parties (COP) to take decisions

3 The Kyoto Protocol Main features Entry into force on 16 February 2005
184 Parties (April 2009) Commitment period: 2008 – 2012 Main features Legally binding targets for emissions of six major greenhouse gases in industrialized countries during first commitment period At the end of 2012: reduction of about 5% New international market-based instruments creating a new commodity: carbon Valuable architecture, but scope not commensurate with the scale of the problem

4 Climate change impacts
Rise in temperature by between 1.8 to 4.0°C by 2100 Increase of intensity and frequency of extreme events, e.g. droughts, floods Diminished food security, impacts on agriculture, especially in developing countries (30% by 2050 in Central and South Asia) Water stress: e.g. 250 million people in Africa at increased risk of water stress by 2020, 120 million to 1.2 billion in Asia Developing countries most at risk from impacts due to existing vulnerabilities and limited capacity to cope

5 2007: climate change science goes mainstream
IPCC’s fourth assessment report: current efforts are not commensurate with the scale of the problem Mitigation: One IPCC scenario: industrialised countries to reduce by 25 – 40% over 1990 by 2020; - this would avoid a range of impacts associated with higher emissions levels. Adaptation: many adaptation options are available; Recognition of the urgency to act; Huge political momentum and increased public awareness on climate change.

9 Current status of the negotiations : Clarity on mitigation
Aggregate figure now: reductions of between 15% and 21% Political demands for aggregate ranges: EU: 30% China: 40% AOSIS and LDC: 45% Continuation of the protocol vs. new arrangements lack of progress, much work still to be done

10 Current status of the negotiations : clarity on NAMAs
Nationally appropriate mitigation actions (NAMAs), to be measured, reported and verified NAMAs to be enabled by technology, finance and capacity building Scope and scale of NAMAs, e.g. REDD, energy efficiency, renewable energy, other Contribution to green economic growth and sustainable development – example: energy NAMAs will depend of the effective delivery of support NAMA registry

11 Current status of the negotiations : enhanced action on adaptation
National Adaptation Programmes of Action – NAPAs – to address the urgent adaptation needs action-oriented and country driven solid basis for capacity building for adaptation In the context of the Bali Road Map: broad interest to build on NAPAs: avoid delaying implementation possibly extend to all developing countries

13 Current status of the negotiations :
financial resources Need to generate significant financial and technological support to enable adaptation action and NAMAs: up to USD 250 billion per year Public funding needed, not repackaged ODA Financial crisis: generate funding within the regime The carbon market is promising, but: it won’t generate enough in its current form How could the carbon market structure be expanded? How to develop other mechanisms? Industrialised countries are discussing proposals that could generate billions of USD 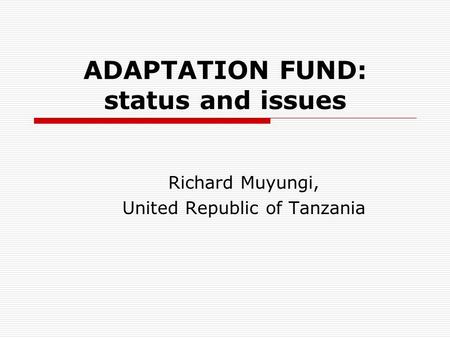 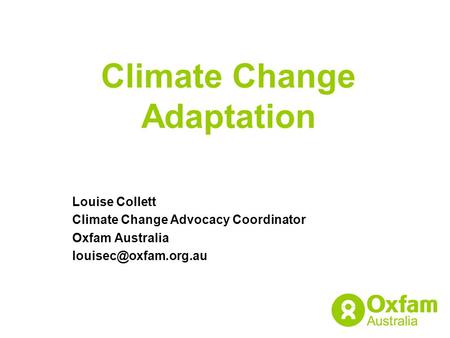 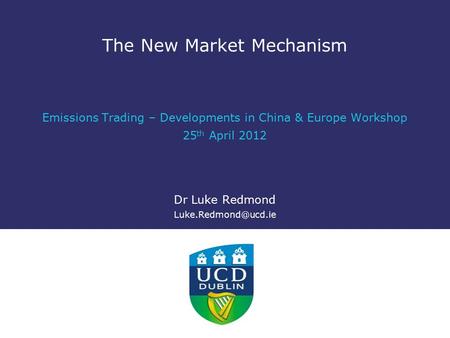 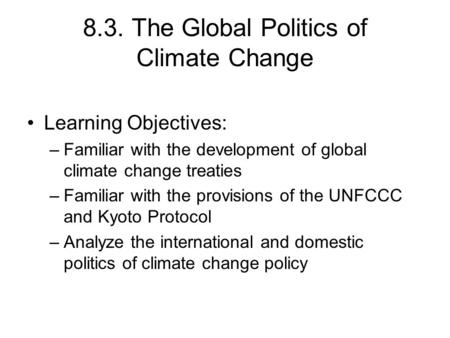 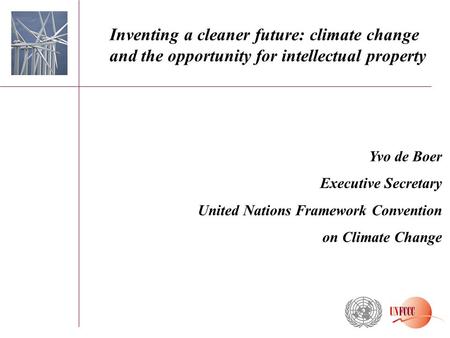