2 Storyboard "There was not much written on the chase in the script. We had one page written on the sequence, but I wanted it to be seven to ten pages long. I wanted it to be the centerpiece of the movie. So rather than writing it, I sat down with my two sketch artists, David Jonas and Ed Verreaux and I just sort of made the whole chase up on paper from frame 1 to frame 405. - Steven Spielberg, on Raiders of the Lost Ark

7 Shot Basic unit of film One uninterrupted piece of celluloid without a cut.

8 Sequence A sequence is a number of shots put together to show an event Examples: The shower sequence from Psycho, the subway fight sequence in The Matrix.

10 Mise-en-Scene Technically means “in the frame.” It is a way to describe what the director has chosen to place in his/her frame. It includes actor’s positions, props, lighting, setting, and costumes.

16 Establishing Shot Also known as ES Often coming at the beginning of a scene, the establishing shot sets the time and place of the action. It is often the outside of a building or a view of a city.

20 Long Shot Also known as LS A long shot is generally made from a sufficient distance to show a landscape, a building, or a large interior. Often, an Establishing Shot is a Long Shot

26 Medium Shot Also known as MS Generally, a medium shot leaves enough room in the frame to reveal full figures. It can, however, be a “waist up” involving several people.

30 Close-Up Also known as CU The image being shot, usually the face, takes up at least 60-80% of the frame. In a close-up, the whole object can still be seen.

35 Extreme Close-Up Also known as an ECU A close up shot in which the full object cannot be seen – only a part of the object is revealed. Usually a part of a face (an eye, lips, etc.)

45 Eye-level Also known as EL 90-95% of a film is shot at eye-level because it is most natural The camera is even with the character’s eyes.

48 Low Angle Shot Also known as LA The camera looks up at what is being photographed, making the subject look larger than normal Has the intended effect of making the character seem strong, powerful, and/or threatening.

53 High Angle Shot Also known as HA The camera looks down at what is being photographed, making the subject look smaller than normal. Has the intended effect of making the character seem weak, powerless, and/or trapped.

58 Zoom The camera does not move, rather the lens is manipulated to make an object seem to move closer or farther away from the camera. Zooming in to a character is often used to highlight a personal or revealing moment. Zooming away from a character is used to separate the character from the viewer.

72 Tilt The camera, while on a fixed base, swivels vertically. Tilt up (camera moves down to up) Tilt down (camera moves up to down)

75 Dolly / Tracking The camera is placed on a track. This allows the camera to move with the action It can take several people, all operating in synchronicity, to operate a dolly.

77 Boom / Crane Camera is placed on a crane. This allows the camera to move up, down, or sideways. Used frequently in establishing shots, or to break the bounds of reality.

85 Dissolve A gradual transition in which one shot is momentarily superimposed on another. This editing technique is used to create a connection for the viewer between two disparate images.

89 Fade Out / Fade In One scene gradually emerges from (or disappears into) darkness. Often, a “fade out / fade in” is used to mark the passage of time.

92 Wipe A new image wipes off the previous image. A wipe is more fluid than a cut and quicker than a dissolve.

95 Two-shot (shot/reverse shot) A shot of one subject, then a shot of another subject, then back to the first Used primarily to edit a conversation between two people.

100 Eyeline Match A cut from an object to a person. Used to establish that the person is looking at (or can see) the object.

121 Bottom/Side lighting Direct lighting from below or from one side Intended effect: Danger, evil, divided motives, moral ambiguity

Download ppt "Film Unit. Storyboard "There was not much written on the chase in the script. We had one page written on the sequence, but I wanted it to be seven to." 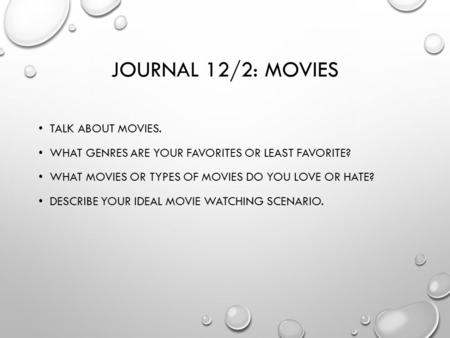 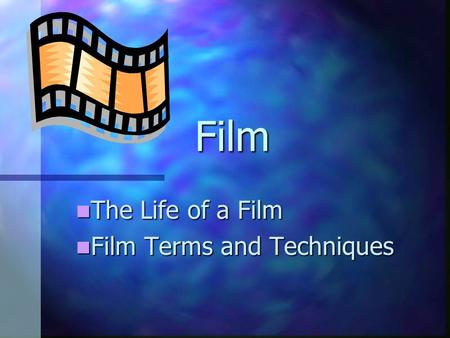 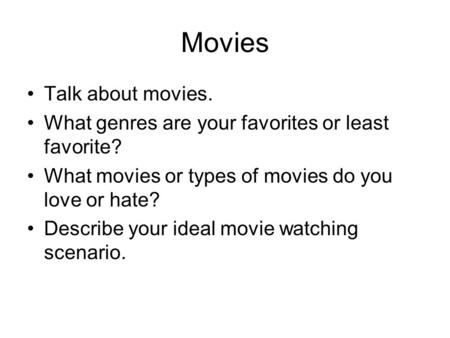 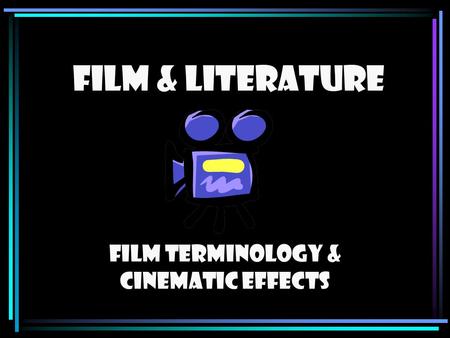 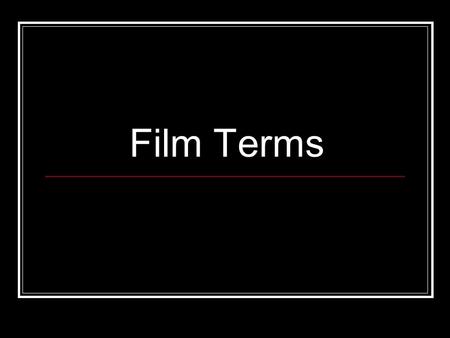 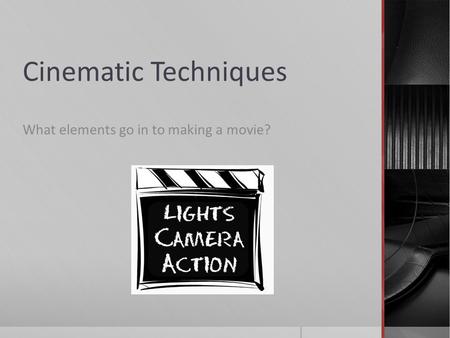 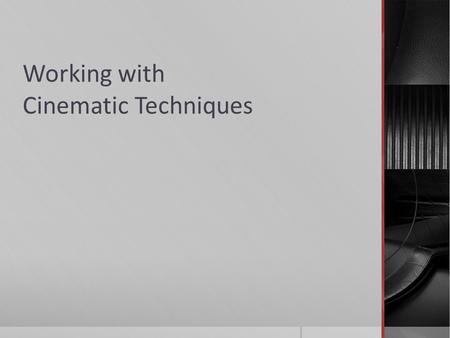