Presentation on theme: "Refrigeration and Heat Pump Systems Refrigeration systems: To cool a refrigerated space or to maintain the temperature of a space below that of the surroundings."— Presentation transcript:

6 . All-air cooling/heating systems – Major Equipment To provide chilled water for centralized Air Conditioning System To remove heat from the cooling water of the condenser of the chiller.

9 Large buildings with variable needs in different zones can be served well with a central system, in which most of HVAC equipment is located in one or more mechanical rooms. Mechanical rooms reduce the noise, spills, and mechanical maintenance that might otherwise occur in the occupied spaces. Large installation such as college campus, military bases, and research facilities may be served by a central station or central plants, where chiller and boiler provide chilled water and hot water or steam through piping system to the entire facility, often through underground piping. Diversity factor: The ratio of the actual maximum demand of a facility to the sum of the maximum demands of the individual parts of the facility. In installations where the energy must be moved over great distances, a liquid (or steam) transport system will probably be used. Not only can pipe sizes be much smaller than the air ductwork, but the cost of power to move steam or liquid is much less than for air. System selection and arrangement

10 Both energy and ventilating air are carried by ductwork between the air handler and the conditioned space. Chapter 2: Air-Conditioning Systems All-air cooling/heating systems Air Handler

11 It is limited to applications where reasonably uniform temperature may be acceptable throughout the entire conditioned space. Types of all-air systems – single-zone systems

12 It may be employed where different temperature levels may be required for different zones. Since cooling is much more expensive than heating, the system may be limited to the use of a single chiller at a fixed cold air temperature sufficiently low to take care of the zones having the maximum cooling load. The zone control thermostat in other zones activate their reheat units when zone temperatures fall below the desire level. Types of all-air systems – Reheat systems

13 Reheating consumes additional energy for conditioning purposes. It may be replaced by variable air volume system (VAV). The VAV compensates for variation in cooling requirement by regulating (throttling) the volume of air supplied to each zone. Air is supplied from a single-duct system and each zone has its own damper. Individual zone thermostats control the damper and the amount of air to each zone. There are significant fan power savings where fan speed is reduced in relation to the air volume being circulated. Types of all-air systems – variable-volume systems

14 The central equipment supplies warm air through one duct run and cold air through the other. The temperature in an individual space is controlled by mixing warm and cold air in proper proportions. Many dual-duct systems are in operation, but fewer are being designed and installed because of the losses associated with the mixing between cold air and warm air. Types of all-air systems – Dual-duct systems

15 Both air and water are distributed to each space being conditioned. The air side of an air-and-water system is made of an air handler, with air intake, filters, fan, and heat exchanger coils. The water side consists of a pump and piping to convey water to the hat transfer surface within each conditioned space. Individual room temperature control is obtained by varying the output of the terminal device(s) within the room by regulating either the water flow or the air flow. Fan-coil conditioner unit is a versatile room terminal that is applied to both air-water and water-only systems. Air and Water Systems Chilled water flows inside the coil from 9 to 6 and air flows outside of the coil from 7 to 8.

16 All-water systems are those fan-coil or unit ventilator room terminals, with unconditioned ventilation air supplied by opening through the wall or by infiltration. A fan-coil system applied without provision for positive ventilation or the one intaking ventilation air through aperture is one of the lowest-first-cost central systems. All-Water Systems

17 The systems usually involve the use of packaged system (unitary air conditioner), which are systems with an integral refrigeration cycle (without involving chilled or hot water). Packaged system components are factory designed and assembled into unit that includes fans, heating coil, cooling coil, refrigerate compressor and controls, airside controls, and condenser. Systems with both indoor and outdoor factory-made assemblies are called split systems – Many residential units in the US. Mini split systems have one or more indoor evaporator units tied to a single outside condenser and compressor system are sometimes referred to as ductless systems (without using a duct to distribute air). Decentralized Cooling and Heating

20 In HVAC the term heat pump most often defines a system in which refrigeration equipment is used to both heat and cool. The thermal cycle is identical to that of ordinary refrigeration; however, in most heat pump systems a reversing valve permit flow reversal of refrigerant leaving the compressor such that the evaporator and condenser roles are switched. Water is in many cases an ideal heat source/sink. Well water is particular attractive because of its relatively constant temperature, generally about 50 F (10 C)in northern areas and 60 F (16 C) and higher in the south. Heat Pump Systems with Well Water

Download ppt "Refrigeration and Heat Pump Systems Refrigeration systems: To cool a refrigerated space or to maintain the temperature of a space below that of the surroundings." 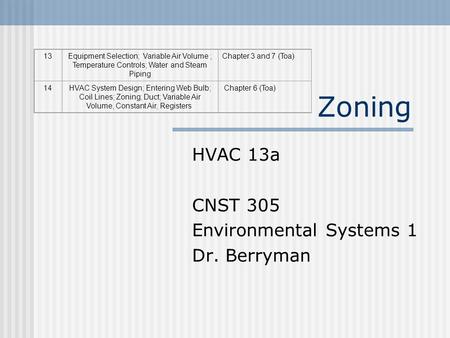 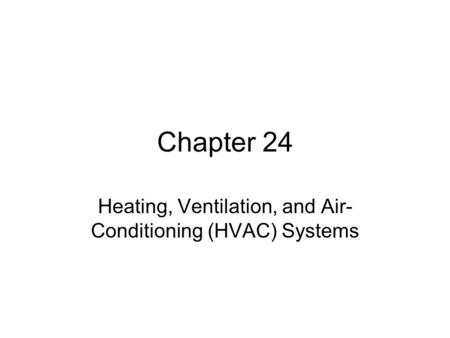 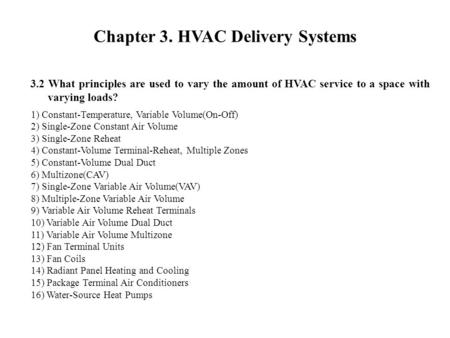 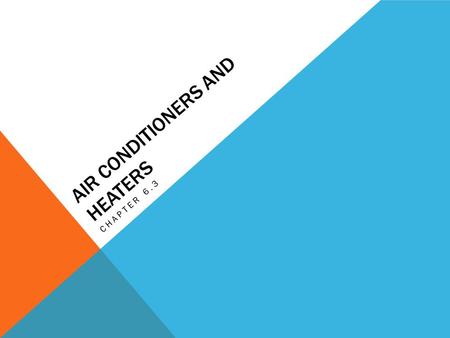 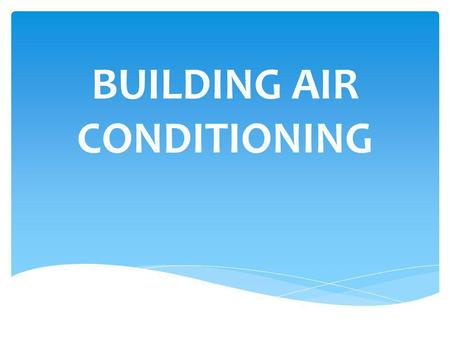 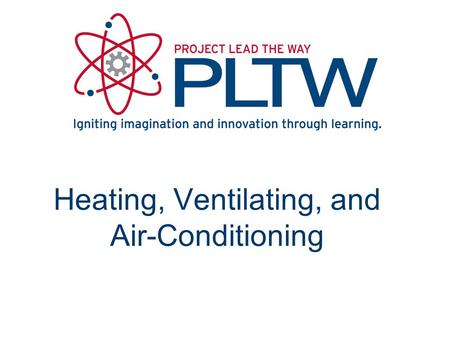 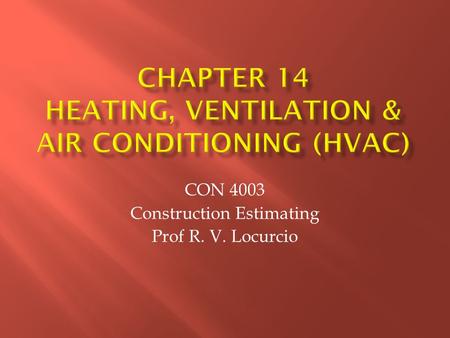 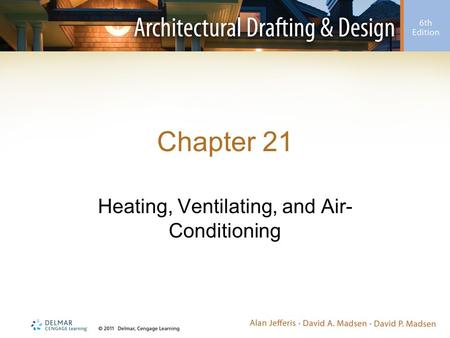 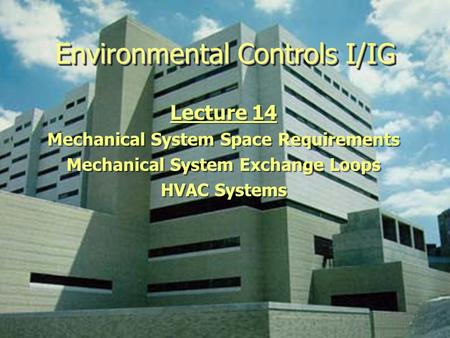 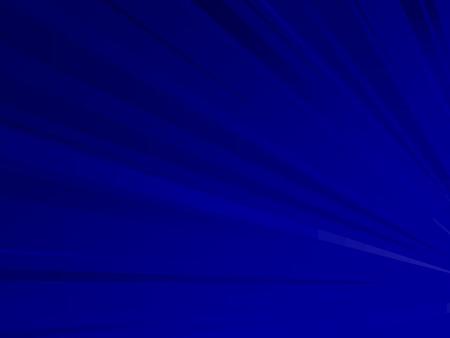 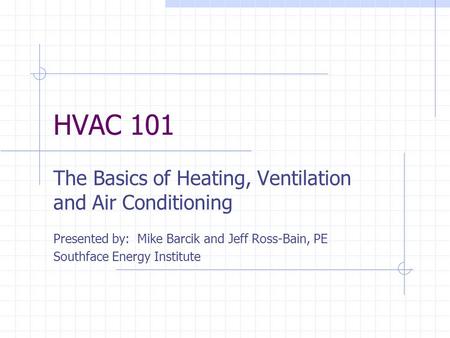 HVAC 101 The Basics of Heating, Ventilation and Air Conditioning 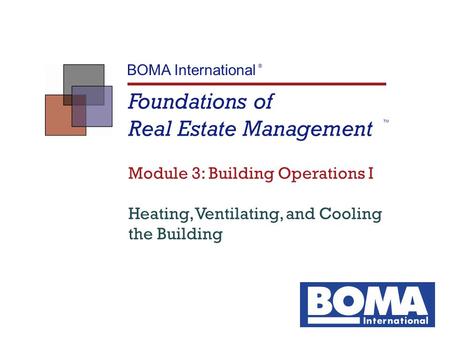 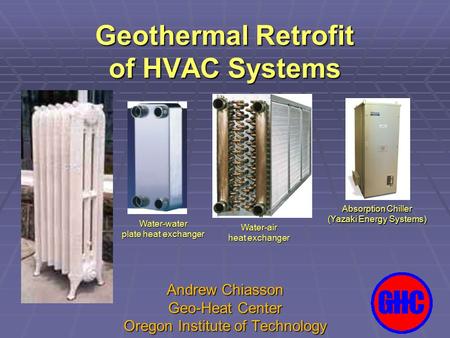 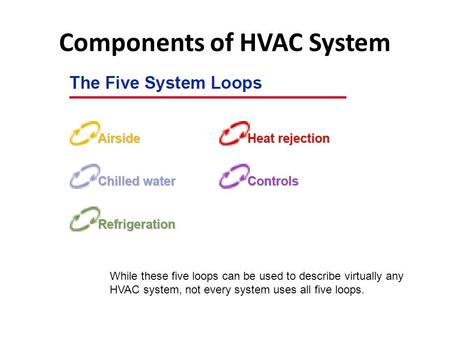 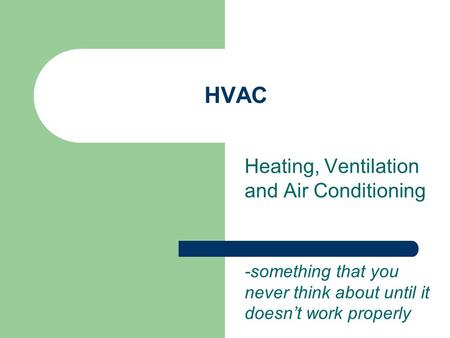 HVAC Heating, Ventilation and Air Conditioning -something that you never think about until it doesn’t work properly. 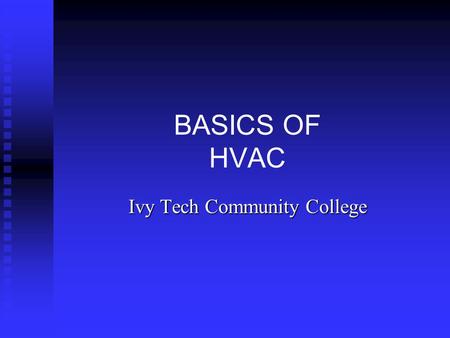 BASICS OF HVAC Ivy Tech Community College. Definitions – Page 862 HVAC systems are made up of the mechanical equipment such as the furnace, air conditioner, 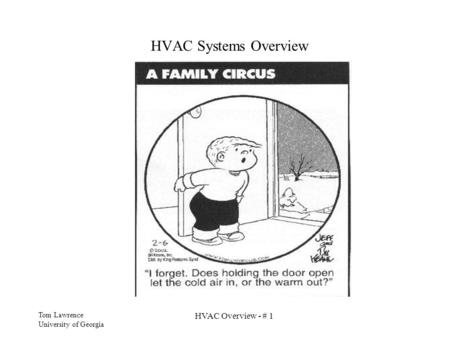