2 Learning Objectives Understand how advances in DNA technology have benefited humans. Learn how different organisms have played a part in the advancement of recombinant DNA technology.

3 What used to take a thousand years, now takes weeks The animals that farmers keep today, have been selectively bred over thousands of years. Cows used today for milk and meat production, do not look anything like the wild animals they are descended from. Humans have unwittingly, manipulated the genetics of various animals and plants over the last few millennia. Humans have only very recently, realised the great power of DNA technology. It is possible to manipulate genes in many ways, inserting them back into a genome, and then seeing new phenotypes emerge. What used to take many generations to occur, can now happen in a few weeks

5 Genetic Modification Every species has a genome, and every individual has its genotype. It is possible to alter the genotype of an organism by transferring genes between: There are many advantages to humans by doing either. Individuals of the same species Individuals of different species

8 Three types of substances are produced using genetically modified BACTERIA... ANTIBIOTICS Mainly bacteria are used, but fungi are useful in some circumstances. These organisms naturally produce antibiotics, but ca be genetically modified to produce them in much larger quantities. HORMONES By far the most common substance produced by genetically modified organisms. Bacteria can have the gene for a hormone inserted into them, so that they produce the protein product. ENZYMES These are required for food and beverage production. The brewing industry requires amylase to break down starch, producing glucose as an energy source for yeast.

10 Three types of substances are produced using genetically modified PLANTS... TOMATOES When tomatoes ripen, they become soft, which is a problem during transportation. This softening is caused by a gene in the tomato plant genome. If a complementary gene is inserted into the plant, it can block the translation of the softening gene. HERBICIDE-RESISTANT CROPS Some plants have a gene introduced that cause them to produce a substance that blocks the action of weedkillers. When weedkillers are applied, competing weeds are killed, leaving the crop plant unaffected. DISEASE-RESISTANT CROPS Every year, rice crops are devastated by the RBSDV virus. Rice crops have been developed though, that can withstand infection by particular viruses.

11 PEST-RESISTANT CROPS Some plants have had genes introduced, that cause them to produce toxins which are insecticidal. These block respiratory pathways and induce paralysis in many insect species that feed on them. PLASTIC PRODUCING PLANTS Many plants naturally produce a kind of latex in their stems. By introducing a particular gene, some plants can be cultivated to produce a more useful type of substance, that has properties similar to plastic. Asclepias syriaca is a species of milkweed, that releases a sticky latex when its stem is pierced.

13 Three types of substances are produced using genetically modified ANIMALS. Sometimes genes from animals that are resistant to a certain disease are transferred to animals that have no natural resistance. This process is utilised in situations where domestic animals can be made more economic, by helping to reduce the cost of food production. Growth hormones genes can also be added to animals such as fish and sheep. In the case of salmon, they can grow up to 30 times as big, at 10 times the usual rate. Genes for rare and expensive proteins can be inserted into animals such as goats, so that the protein is produced in the animal’s milk.

14 The case of anti-thrombin Anti-thrombin is an anticoagulant, which prevents blood from clotting. There is an inherited disorder which affects once of the alleles that codes for anti-thrombin. These individuals are at risk from blood-clots. Vast quantities of anti-thrombin can be produced in goats milk.

15 Mature eggs removed from female and fertilised by sperm Normal anti-thrombin gene from human is inserted next to milk protein gene in fertilised eggs These transformed eggs are transplanted into uterus of female goats The resulting goats with anti-thrombin gene are crossbred, to give a herd that produces protein in milk. Anti-thrombin is extracted from milk, purified and administered to humans.

16 Summary Question State one advantage to humans of genetically modified tomatoes. Suggest one benefit and one possible disadvantage of using genetically modified, herbicide-resistant crop plants together with the relevant herbicide. Explain your answer. Why is insulin produced by recombinant DNA technology better than insulin extracted from animals? 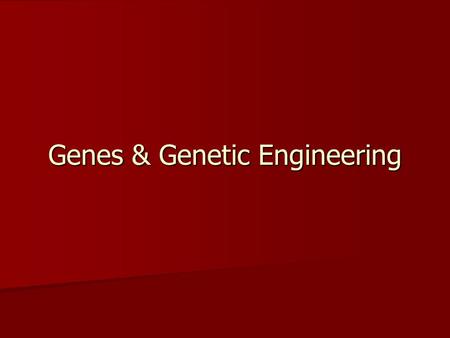