Presentation on theme: "Directions: Press F5 to begin the slide show. Press the enter key to view each part of the review."— Presentation transcript:

1 Directions: Press F5 to begin the slide show. Press the enter key to view each part of the review.

4 What is a Clause? A clause is a group of words that contain both a: –subject and a –verb S V Ex. we walked down the street S V Ex. after the rain had started

5 Practicing Clauses On a separate sheet of paper, number from one to five. Write C if the group of words is a clause. Write F if it is not. 1. walking down the street 2. I saw a plan in the sky 3. Mary and Bob are friends 4. when the season started 5. the girl with the brown hair

7 What is an Independent Clause? An independent clause is a sentence. It can stand alone and tells a complete thought. S V –Ex. Mary threw the ball. V S –Ex. Underneath the book was my pencil.

12 Finding Relative Subordinate Clauses In each sentence, locate the subordinate clause that begins with a relative pronoun. 1. The boy, whose puppy is missing, is sad. whose puppy is missing 2. I love the book that I am reading. that I am reading 3. The man to whom the letter is addressed is here. to whom the letter is addressed 4. Disney World, where I love to go, is amazing! where I love to go

13 What is a Subordinate Clause? The subordinate conjunctions are: after, although, as, as if, as long as, because, before, even though, if, in order that, since, so that, than, though, unless, until, when, whenever, where, wherever, while These words begin a subordinate or dependent clause. They can come anywhere in a sentence; however, if they begin the sentence, they must be followed by a comma. Subordinate clauses that begin with a subordinate conjunction work as adverbs. This means they will describe a verb, adjective, or adverb in the independent clause.

16 Punctuating Subordinate Clauses If the subordinate clause comes at the beginning of the sentence, a comma must be placed after it before the independent clause. If the independent clause comes first, and the subordinate clause follows it, then no comma is needed. Ex. Because it was raining, the game was cancelled. Ex. The game was cancelled because it was raining.

17 Practice – Punctuating Subordinate Clauses Decide if the punctuation is correct in each sentence. 1. I love when it rains. correct 2. Although I understand I want more of an explanation. incorrect – comma needed after “understand.” 3. I yelled, so that I could be heard better. incorrect – the subordinate clause comes second

18 Practicing Clauses On a separate piece of paper number from one to five. Write I if the clause is independent and write S if the clause is subordinate. If it is subordinate, tell if it is an adjective or adverb clause. 1. in chorus we sang many songs 2. as if nothing had happened 3. whenever I feel like it 4. whose book I borrowed 5. following the announcements was the bell.

20 Enrichment – Writing Better Sentences Two sentences can be combined by turning one independent clause into a subordinate one. This makes a different kind of sentence called a complex sentence. Using a variety of types of sentences in one’s writing makes writing stronger. Using subordinate clauses makes connections between ideas.

21 Enrichment – Writing Better Sentences Ex. I like cats. They are entertaining. Better: I like cats because they are entertaining. Ex. The man is very tall. He is an accountant. Better: The man, who is very tall, is an accountant. Ex. Watching television is boring right now. All of the shows are repeats. Better: Since all of the television shows are repeats, watching television is boring right now.

22 This completes the review of clauses. Additional review can be done in the review folders housed in 106 and the library.

Download ppt "Directions: Press F5 to begin the slide show. Press the enter key to view each part of the review." 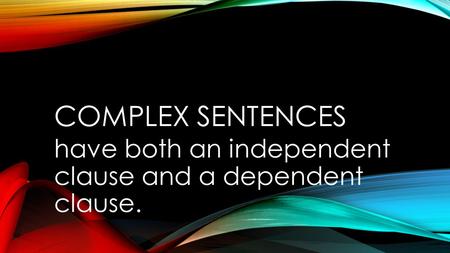 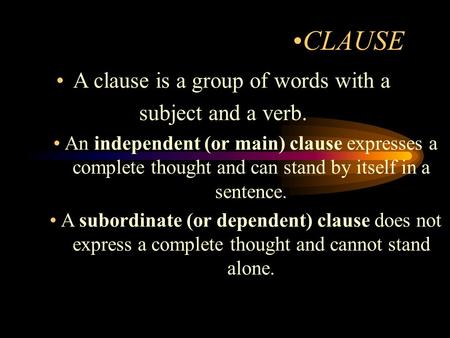 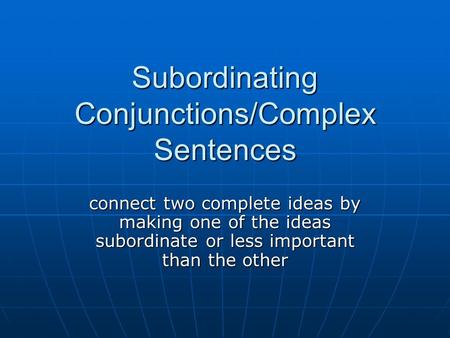