2 Neurons Individual cells in the nervous system that receive, integrate, and transmit information.

6 Definitions Dendrites= the branching extensions of a neuron that receives info. and conduct impulses toward the cell body (into the neuron).

7 Nucleus: part of the neuron that contains chromosomes (genetic material).

8 Cell body a.k.a Soma= part of a cell which contains the nucleus and other parts that keep the cell healthy.

10 Node of Ranvier: Gaps in the myelination of axons.

11 Axon= a neuron’s extending fiber, which conducts impulses away from the cell body and transmits to other neurons, muscle or gland cells.

12 Axon terminals (a.k.a Synaptic terminal, and terminal buttons)= endpoint of a neuron where neurotransmitters (discussed soon) are stored.

14 Plasticity Neurons have the ability to change---to make new connections or to strengthen old ones. Examples: learning Violin player gains expertise, the motor area linked to the fingers of the left hand becomes larger (Juliano, 1998).

16 Central Nervous System
Consists of the brain and spinal cord. Can be compared to a computer…processing center Regulates EVERYTHING in your body.

17 CNS (Brain) Enables you to think, plan, and create. Regulate life processes. A series of 22 fused bones protect the brain. The adult human brain weighs about 3 pounds. The brain devotes huge amounts of neural circuitry to the hands, lips, feet and tongue. Your brain uses about 12 watts of power—a fraction of the energy of a household lightbulb.

18 CNS (The Spinal Cord) A column of nerves nearly as thick as your thumb. Extension of the brain. Cord is a neural pathway that transmits info. b/w the brain and the peripheral nervous system. Receives incoming info. From your sense organs. Carries outgoing commands from the brain to muscles, glands, and organs. There are about 13,500,000 neurons in the human spinal cord.

19 Spinal reflex A reflex controlled at the level of the spinal cord, a reflex that bypasses the brain. Examples: jerk your knee when it is tapped, pull your hand away from a burning surface, or blink when a gust of wind sent particles of debris hurtling toward your eyeballs.

20 Peripheral Nervous System
The nervous system that connects the spinal cord and brain with the sensory organs, muscles, and glands.

21 PNS (Somatic Nervous System)
Transmits messages b/w your central nervous system and your sensory organs and muscles. It helps your muscles to contract in response to an INTENTIONAL command. A.K.A. Skeletal nervous system

23 ANS (Sympathetic Nervous System)
Speeds up bodily processes and draws energy from stored reserves. Accelerates your heart rate and breathing Provides more fuel/energy for the body by releasing glucose Strong emotions, such as anxiety, fear, or anger. +Accelerator in a car

24 ANS (Parasympathetic Nervous System)
Regulates bodily processes, such as digestion. Converts food into glucose Conserve energy by SLOWING DOWN bodily processes such as heart rate, breathing, etc. Engaged when you are relaxing or digesting a meal. +breaks in a car 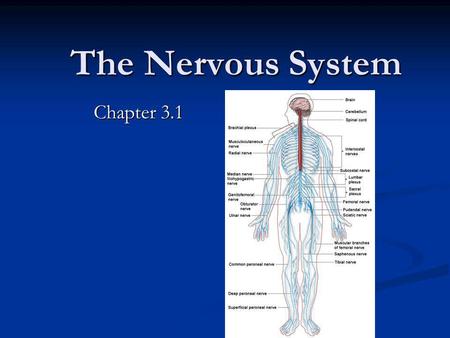 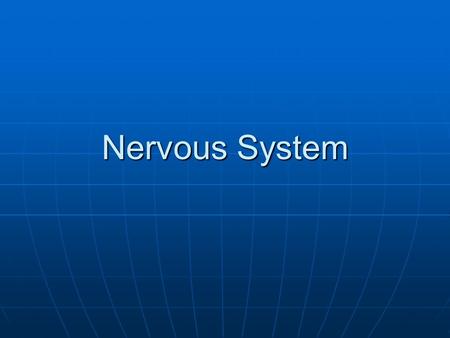 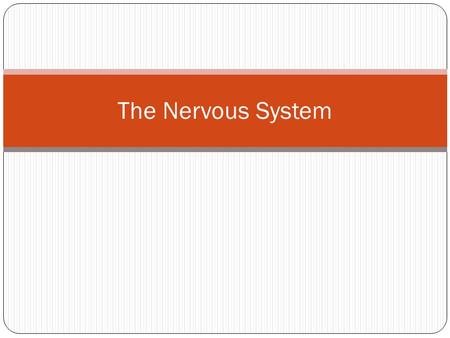 The Nervous System. The Central Nervous System The master design system that controls everything in your body including; heart rate, eye movements, higher. 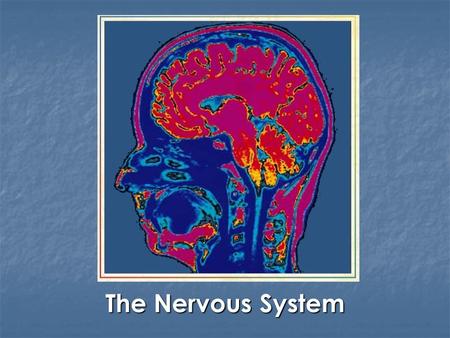 The Nervous System. I. Introduction The basic functional unit of the nervous system is the neuron Neuron  Specialized cell that transmits information.