2 Bonding When atoms combine they form a chemical bond
The force of attraction between two or more atoms.

3 Valence Electrons Are the outer most electrons of an atom.
They play a huge role in how an atom bonds.

4 Lewis Structure Is a diagram of atoms that only shows the valance electrons Ex: Cl Na H Ar

7 Ion An ion is an atom which has lost or gained one or more electrons, making it positively or negatively charged. A negatively-charged ion, gains an electrons so it has more electrons then it has protons. A positively-charged ion, looses electrons so it has more protons then electrons. A polyatomic ion is an ion that is made up of more than one atom. Poly= Many Atomic= Atoms Ex: NH4+ is the chemical formula for an ammonium ion. It contains two elements nitrogen and hydrogen and has a positive charge.

9 F K In an IONIC bond, electrons are lost or gained,
resulting in the formation of IONS in ionic compounds. F K

18 Formulas Reminder: A chemical formula is the combination of symbols that show the elements in the compound. i.e. MgCl2 If a molecule contains more than one atom of a particular element, you indicate it by using a subscript after the chemical symbol (ex: the 2 in MgCl2). It tells you the ratio of atoms in the compound (MgCl2 has a 1:2 ratio). If no subscript is written the number 1 is understood( NaCl there is a 1:1ratio). A coefficient acts as a multiplier for all of the atoms in the entire compound, it is found in front of the chemical formula Ex: the 5 in 5 MgCl2

19 Example MgCl2 Here we have one molecule of magnesium chloride.  The subscript 2 in the formula above only pertains to the chlorine in the compound.   The total number of atoms in the compound is 3. Now let us put a coefficient in front of the molecule and see how that changes things. 5 MgCl2 The coefficient 5 refers to the entire molecule.   It shows that there are 5 compounds of magnesium chloride. Since each molecule is made up of 3 atoms, the total number of atoms is now 15.  There are 5 magnesium atoms and 10 chlorine atoms. How many atoms are in the following bond 3Na2S Sodium(Na)____ Sulfur(S)____ Sodium Sulfide(3Na2S) ____ = total atoms 6 3 9

21 Properties of Ionic Compounds
Hard Brittle Crystals High melting points- NaCl melts at 801˚C= ˚F When dissolved in water they are electrolytes. An electrolyte solution is one that can conduct electricity. Ionic bonds in solid from are poor conductors.

22 Covalent Bonds The chemical bond formed when two atoms share electrons. Usually form between nonmetals. We call the neutral group of atoms joined by a covalent bond a molecule.

23 In covalent bonding, atoms still want to follow the octet rule and have a complete valance shell

26 Chlorine forms a covalent bond with itself Cl2

28 Cl Cl Each chlorine atom wants to gain one electron to achieve
a full outer shell.

38 Cl Cl This is the bonding pair

39 Cl Cl It is called a SINGLE BOND

42 O2 Oxygen is also one of the diatomic molecules

46 Both electron pairs are shared.

50 O O = For convenience, the double bond can be shown as two dashes.

53 Polar Bonds A covalent bond in which electrons are shared unequally is called a polar bond. ex: water molecules One atom pulls more strongly on a shared electron causing a slight charge. Polar molecules tend to pull close together because the negative end of each molecule is attracted to the positive end of other molecules.

54 Nonpolar Bonds If the electrons are shared equally it is called a nonpolar bond. A molecule may contain a polar bond and still be nonpolar overall. In order for this to happen the molecule must bond in a straight line with opposite pulling. Ex: carbon dioxide There is little attraction between non polar molecules

55 Why Doesn’t Oil & Water Mix?
The molecule in vegetable oil are nonpolar and have little attraction to other molecule. Water molecules are polar and are strongly attracted to one another. SO, the water stays with the water which leave the oil by itself. Adding soap allows them to mix easily because the soap molecule contains one end that is an ionic bond and the other end is a nonpolar covalent bond. The nonpolar end mixes with the oil and the charge on the ionic end attracts the water

56 Metallic Bonds An attraction between a positive metal ion and the electrons surrounding it. In other words: Many electrons are shared by many atoms. A metal consists of positively charged metal ions embedded in a “sea” of valence electrons.

57 Metallic Properties The “sea of electrons” model of solid metals explains their properties: Heat/electrical conductivity The free moving valance electrons make it easier for the particles to move faster. Changes in shape Ductile Malleable This happens because the ions in the metal are not attracted to each other, instead they are attracted to the loose electrons all around them. Luster A metals luster is due to its valance electrons. They absorb and then reflect the light which we see has shiny. 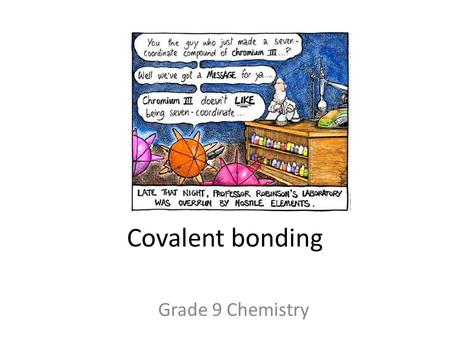 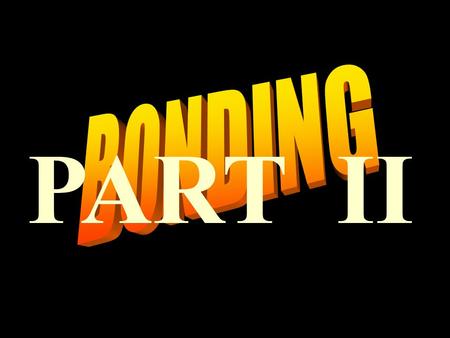 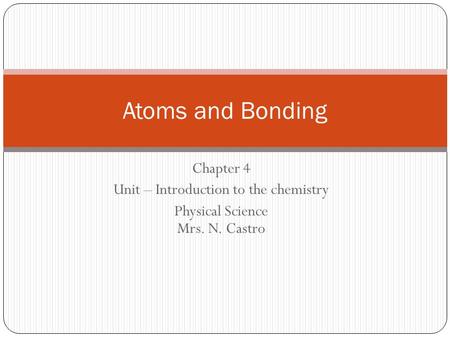 Atoms and Bonding Chapter 4 Unit – Introduction to the chemistry 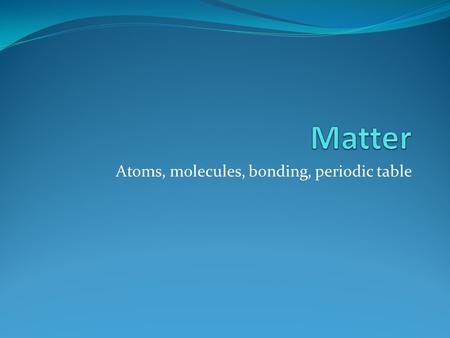