4 In the early 1920s, African American artists, writers, musicians, and performers were part of a great cultural movement known as the Harlem Renaissance. The huge migration to the North after World War I brought African Americans of all ages and walks of life to the thriving New York City neighborhood called Harlem. Doctors, singers, students, musicians, shopkeepers, painters, and writers, congregated, forming a vibrant mecca of cultural affirmation and inspiration.

10 LANGSTON HUGHES  Missouri-born Langston Hughes was the movement’s best known poet  Many of his poems described the difficult lives of working-class blacks  “Thank you Ma’am”  Some of his poems were put to music, especially jazz and blues

11 Zora Neale Hurston 1891-1960 American writer Zora Neale Hurston was remarkable in that she was the most widely published “Queen of the Harlem Renaissance.” black woman of her day. She authored more than fifty articles and short stories as well as four novels, two books on folklore, an autobiography, and some plays. At the height of her success she was known as the “Queen of the Harlem Renaissance.”

12 In 1925, at the height of the jazz era in Paris, the sensational cast of musicians and dancers from Harlem, assembled as La Revue Negre, exploded on the stage of the Theatre des Champs Elysees. Its talented young star, Josephine Baker (1906-1975), captivated audiences with a wild new dance called the Charleston.

13 LOUIS ARMSTRONG  Jazz was born in the early 20 th century  In 1922, a young trumpet player named Louis Armstrong joined the Creole Jazz Band.  Armstrong is considered the most important and influential musician in the history of jazz

15 BESSIE SMITH  Bessie Smith, blues singer, was perhaps the most outstanding vocalist of the decade  She achieved enormous popularity and by 1927 she became the highest- paid black artist in the world

17 Johnson arrived in Harlem when the Renaissance was in the making. While there he created several paintings that dealt with political and social Harlem. Chain Gang is one example. William H. Johnson 1901-1970 Chain Gang. 1939

18 William H. Johnson Swing Low, Sweet Chariot 1939 Johnson always showed great devotion to painting themes that celebrated Black Christianity. This painting is an example of one based on a literal interpretation of a spiritual occasion.

20 Jazz Clubs and Dance Halls To hear the “real” jazz – NYC and the neighborhood of Harlem. –500 jazz clubs –Cotton Club the most famous –BUT Most white Americans did not want to hear jazz. 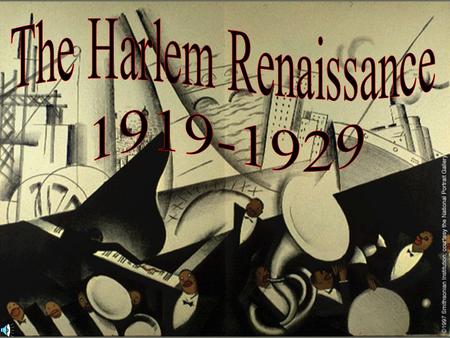