Pablo Picasso By: Haya Al-Rabban. Where is the artist from? Pablo Picasso was born in Malaga, Spain on October 25 th 1881. He was one of the most influential.

Presentation on theme: "Pablo Picasso By: Haya Al-Rabban. Where is the artist from? Pablo Picasso was born in Malaga, Spain on October 25 th 1881. He was one of the most influential."— Presentation transcript:

2 Where is the artist from? Pablo Picasso was born in Malaga, Spain on October 25 th 1881. He was one of the most influential artists of the 20 th century and was one of the founders of the “cubist” movement. This is where ordinary objects are taking apart and are reassmbled as geometrical shapes. He died on April 8 th 1973 Pablo Picasso’s hometown

4 About the weeping woman Picasso created the Weeping woman in France in 1937. It is an oil painting, on canvas and it shows a woman crying. It is part of his cubism period because the woman’s face is full of geometrical shapes such as triangles and ovals. It was said to represent universal suffering and Picasso wanted everyone to imagine themselves in the face of this woman. He painted it as a protest against war because so many people died during the Spanish civil war and also World War 2.

5 Is the painting realistic or abstracts? The painting is an abstract because Picasso took the idea of a woman but then painted it in a series of shapes. He used ovals for the eyes and then added such huge, thick eye lashes that they almost look like brushes. The colors are not realistic either. He has made her face green, yellow and purple which you will never find on a human. Her hair is also many different color which you wouldn’t find normally.

6 Why did I choose this art work? When I first saw The Weeping Woman I didn’t really like the painting. I thought it was just a jumbled mess and that it has no meaning. The more I look at it the more I could understand the message in the painting and now it changed my mind and now I really like it. You could really see suffering in her face. The painting doesn’t have to be just about war but, it can be about losing someone that is close to you. I also like the colors because they are eye catching and really want to make you look at the picture. I also like the fact that she has a handkerchief over her face but you can see through the handkerchief. I think she is trying to hide her suffering like most people do.

8 Website I chose the website PabloPicasso.org because it contains so much information about Pablo Picasso. It looks at all his famous painting and sculptures and the different art periods that he painted in. I also like the fact that it has quotes from Picasso such as “Bad artist copy. Good artists steal” This lets you know something about what the artist thought and I think this is interesting. There is also a fun section which tells you unusual facts about Picasso and a puzzle section where you make jigsaw puzzles out of his famous paintings. It is written quite simply so everyone can understand it but, it has a lot of information.

Download ppt "Pablo Picasso By: Haya Al-Rabban. Where is the artist from? Pablo Picasso was born in Malaga, Spain on October 25 th 1881. He was one of the most influential." 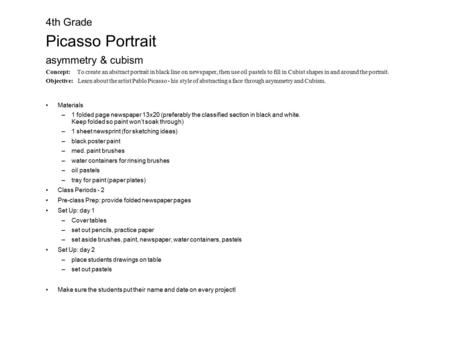