3 What Are ACLs?  Lists of instructions you apply to a router's interface. Tell the router what kinds of packets to accept and what kinds to deny based on criteria defined in the ACL.  Cisco ACLs support all routed network protocols (IP, IPX). Each protocol must have its own ACLs.

4 Definition Of ACL  ACLs are lists of instructions you apply to a router's interface.  These lists tell the router what kinds of packets to accept and what kinds of packets to deny.  Acceptance and denial can be based on certain specifications, such as source address, destination address, Traffic Direction, and port number.  ACL in then applied to a router interface.  Any traffic going through the interface is tested against certain conditions that are part of the ACL.  ACLs must be defined on a per-protocol basis. If your router interface were configured for IP, AppleTalk, and IPX, you would need to define at least three ACLs.

7 Locations Where ACL logic Can be Applied In The Network What needs to be filtered? Which Router? Which Port? Which Direction? Communication between Bob and Server 1: Packets from Bob enter S1. Packets to Bob, exit S1

8 How an Outbound ACL Works

9 Testing Packets With ACLs  The order in which you place ACL statements is important. When the router is deciding whether to forward or block a packet, the Cisco Internetwork Operating System (IOS) software tests the packet against each condition statement, in the order in which the statements were created.  After a match is found, no more condition statements are checked.  If all the ACL statements are unmatched, an implicit "deny any" statement is imposed.  If you need additional statements, in a standard or extended ACL you must delete the ACL and re-create it with the new condition statements.  You can create an ACL for each protocol you want to filter for each router interface. For some protocols, you create one ACL to filter inbound traffic, and one ACL to filter outbound traffic. (one ACL per protocol, per port, per direction.)

10 Flowchart of the ACL Test Matching Process ACL lines are processed sequentially (top-down). When a criteria is matched, the packet is permitted or denied and no other testing occurs on that packet. If no ACL test matches, the packet it is denied by default.

20 Permit and Deny Statements  Except in special circumstances, every ACL must have at least one permit statement. An ACL made up of only deny statements combined with the implicit deny any statement will block all traffic in the direction of the ACL.

21  Criteria is limited to source network address only. Can identify a host, subnet, or network Denies or permits all traffic from the target address for the protocol Necessary to place close to the destination Standard ACLs

22 Standard ACLs Example #1 This one-line ACL will allow into each LAN only packets from the other LAN, not from the cloud. The implicit deny any blocks any other traffic.

23 Standard ACLs Example #2 This two-line ACL will deny traffic from a single host A from getting to the X network. The second line could and should have been access-list 1 permit any. The implicit deny any is negated by the previous line, which allowed every thing through. A Network X

24 Standard ACLs Example #3 This two-line ACL will deny traffic from the entire 172.16.4.0 network. The second line allows any traffic from the cloud. The implicit deny any is negated by the permit any line, which allowed everything else through.

27 Applying Standard ACLs to a Router’s Port  The ip access-group command groups an existing ACL to an interface.  Remember that only one ACL per port per protocol per direction is allowed. The format of the command is: Router(config-if)#ip access-group access-list- number {in | out} 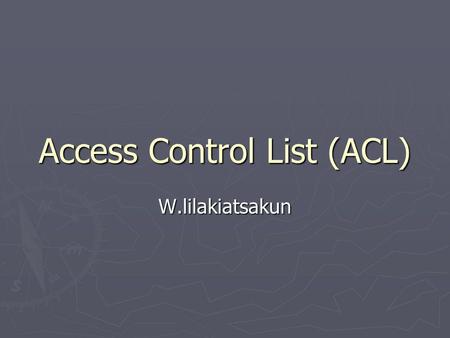 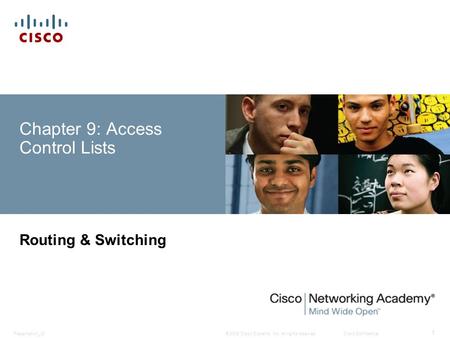 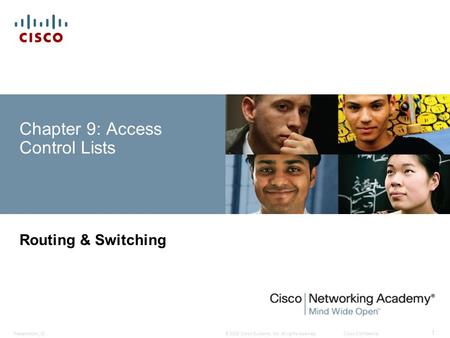 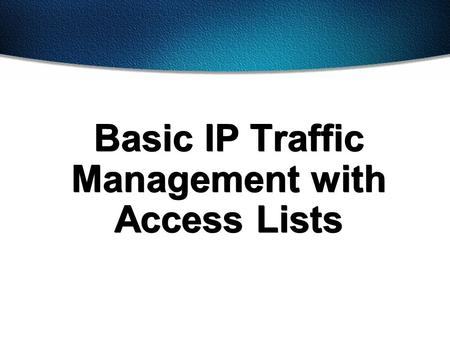 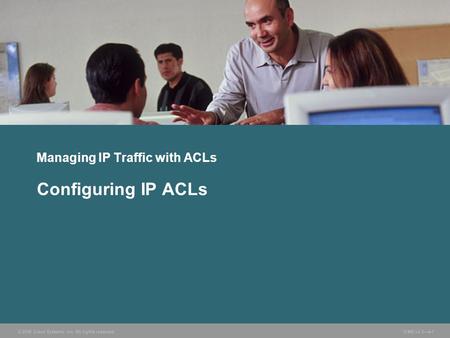 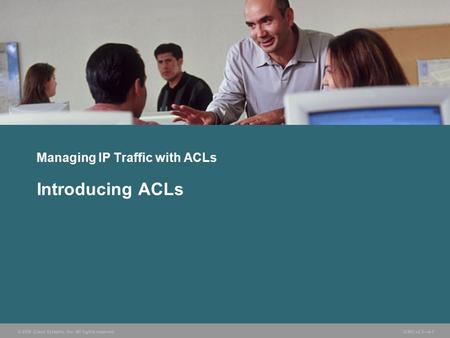 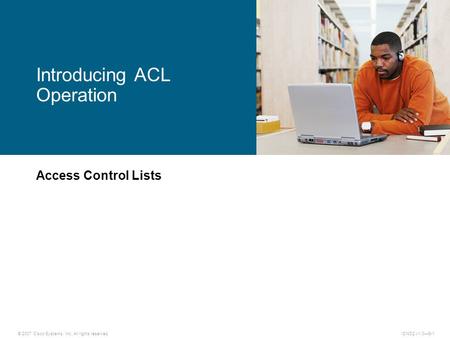 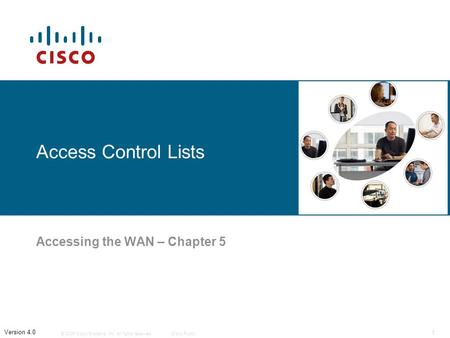 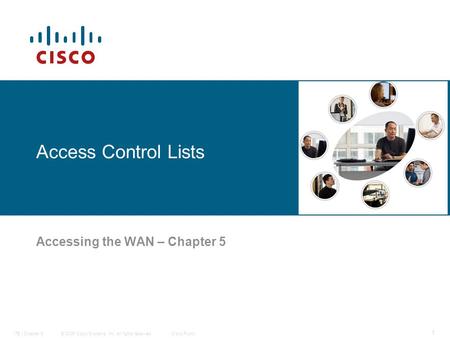 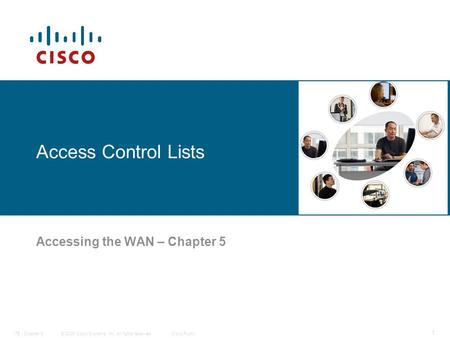 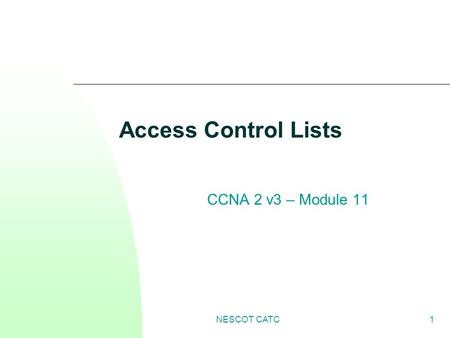 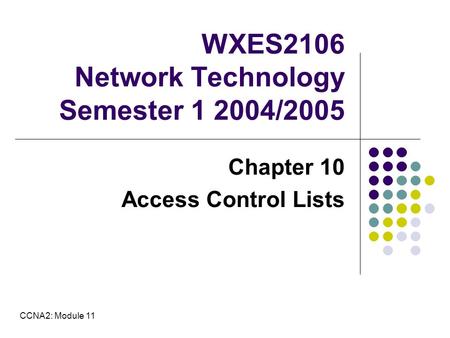 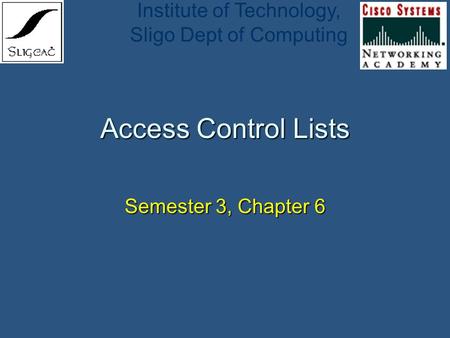 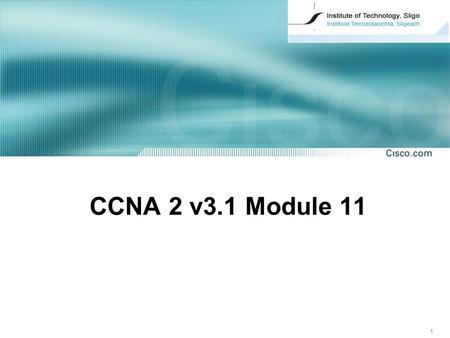 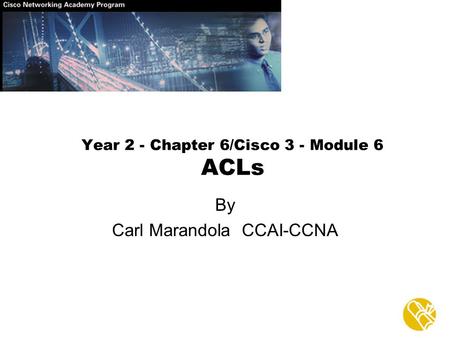 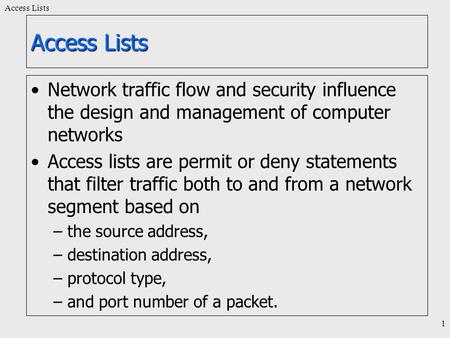 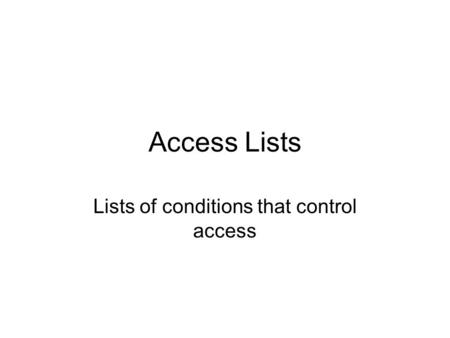 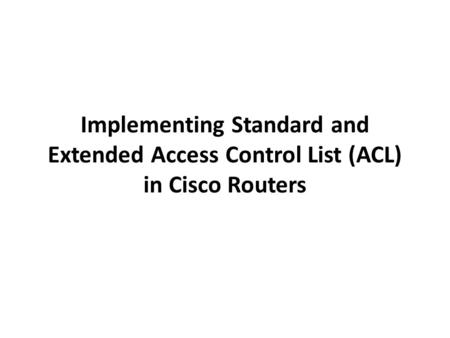 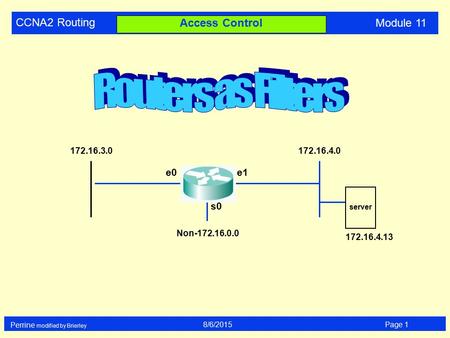 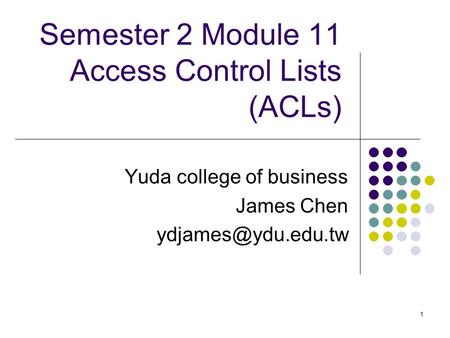