5 Verbs A word that expresses action, helps to make a statement, or expresses a state of being. The verb or compound verb (e.g. was looking) is the critical element of the predicate of a sentence. Every sentence must have a verb!

6 Kinds of verbs Transitive verb - can be used in the active or passive voice (e.g. John drives a car. OR A car is driven by John) Intransitive verb- The verb is not followed by an object. (e.g. He plays the piano.) Linking verb- used to connect the subject to two kinds of complements: 1) An adjective that describes the subject; 2)a noun or noun equivalent that means the same as the subject. (e.g. She is beautiful.)

7 Adjectives Modifies or describes a noun or pronoun Ex: The big dog. Answers these questions: Which? What kind? How many?

8 Adverb Modifies or describes a verb, an adjective, or another adverb. Interrogative adverbs introduce questions. (e.g. How, when, how often, where.) Answers these questions: How? (e.g. He ran quickly.) When? (e.g. She left yesterday.) Where? (e.g. We went there.) To what degree? (e.g. It was too hot.)

9 Pronouns A pronoun is a word used in place of one or more nouns. A pronoun may stand for a person, place, thing, or idea.

10 Kinds of pronouns Personal pronouns: I, me, mine, you, your, yours, she, her, hers, it, its, we, us, our, ours, they, them, their, theirs, myself, yourself. Indefinite pronouns: anybody, each, either, none, someone, one. Demonstrative pronouns: this, that, these, those. Interrogative pronouns: who, whom, what, which, whose.

11 Preposition Introduces a noun, pronoun, phrase or clause functioning as a noun. The word or word group that the preposition introduces is its object. (e.g. They received a postcard from Bobby telling about his trip to the United States.)

13 Conjunction and Interjection A conjunction is a word that joins words or groups of words (e.g. Jamie and Sarah went to the store.) Conjunctions include: And, but, either/or, neither/nor. An interjection is an exclamatory word that expresses emotion. (e.g. Wow! Look at that sunset!)

15 Punctuation (2/3) Use a semicolon to… join two independent clauses. (eliminates the need for a comma or conjuction) Ex: Casey read a book; then he did a book report. separate items in a series when those items contain punctuation such as a comma. Ex: We went on a trip to Toronto, Ontario; Montreal, Quebec; and New York, New York.

16 Punctuation (3/3) Use a comma when… there is a series of at least three items. Ex: I dislike spinach, broccoli, and cauliflower. There is an interruption in the main thought of a sentence. Ex: Rosa, of course, will bring her folding chairs. There are two adjectives that equally modify the same noun. Ex: Jill was having problems with unruly, disruptive children. A dependent clause begins a new sentence. Ex: If Mr. Wilson complains, we will invite him for a snack. There is a mild interjection, such as oh or well. 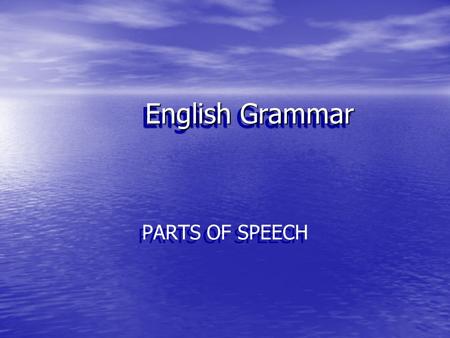