6 20.1 Series and Parallel Circuits
In series circuits, current can only take one path. The amount of current is the same at all points in a series circuit.

10 20.1 Total resistance in a series circuit
Light bulbs, resistors, motors, and heaters usually have much greater resistance than wires and batteries.

13 20.1 Voltage in a series circuit
Each separate resistance creates a voltage drop as the current passes through. As current flows along a series circuit, each type of resistor transforms some of the electrical energy into another form of energy Ohm’s law is used to calculate the voltage drop across each resistor.

17 20.1 Series and Parallel Circuits
Sometimes these paths are called branches. The current through a branch is also called the branch current. When analyzing a parallel circuit, remember that the current always has to go somewhere. The total current in the circuit is the sum of the currents in all the branches. At every branch point the current flowing out must equal the current flowing in. This rule is known as Kirchhoff’s current law.

21 20.1 Short circuit A short circuit is a parallel path in a circuit with zero or very low resistance. Short circuits can be made accidentally by connecting a wire between two other wires at different voltages. Short circuits are dangerous because they can draw huge amounts of current.

26 20.2 Analysis of Circuits Key Question:
How do we analyze network circuits? *Students read Section AFTER Investigation 20.2

29 20.2 Voltage divider circuit
The total resistance of this circuit is 10 ohms (9Ω + 1Ω). The total current is 1 amp from Ohm’s law (10V ÷ 10Ω). What is the voltage at point (A)? We can use Kirchhoff’s voltage law to find the answer. Assume the current flows according to the light blue loop. The battery starts at +10V. Resistor R1 drops the voltage by 9V. This voltage drop is calculated from Ohm’s law and the resistance, V = 1A × 9Ω. Resistor R2 drops the voltage by 1V (1A × 1Ω). Around the whole loop the sum of the voltage gains and drops is zero ( = 0).

31 20.2 Solving circuit problems
Identify what the problem is asking you to find. Assign variables to the unknown quantities. Make a large clear diagram of the circuit. Label all of the known resistances, currents, and voltages. Use the variables you defined to label the unknowns. You may need to combine resistances to find the total circuit resistance. Use multiple steps to combine series and parallel resistors.

33 20.2 Solving circuit problems
A bulb with a resistance of 1Ω is to be used in a circuit with a 6-volt battery. The bulb requires 1 amp of current. If the bulb were connected directly to the battery, it would draw 6 amps and burn out instantly. To limit the current, a resistor is added in series with the bulb. What size resistor is needed to make the current 1 amp? 1) You are asked to calculate the resistance. 2) You are told it is a series circuit and given the voltage, total current, and one resistance. 3) Use Ohm’s law, R = V ÷ I, and add the resistance in series. 4) Solve: Total resistance = 6V ÷ 1A = 6Ω. SInce the bulb is 1Ω, the additional resistor must be 5Ω to get a total 6Ω of resistance.

35 20.2 Calculate using network circuits
Three bulbs, each with a resistance of 3Ω, are combined in the circuit in the diagram Three volts are applied to the circuit. Calculate the current in each of the bulbs. From your calculations, do you think all three bulbs will be equally bright? 1) You are asked to calculate the currents. 2) You are given the circuit diagram, voltages, and resistances. 3) Use Ohm’s law, R = V ÷ I, and the series and parallel resistance formulas. 4) First, reduce the circuit by combining the two parallel resistances. 1/R total = 1/3 Ω + 1/3 Ω = 2/3 Ω R= 3/2 Ω = 1.5 Ω 5) Calculate the total resistance of 4.5Ω by adding up the remaining series resistances. Calculate the total current using Ohm’s law: I = 3V ÷ 4.5Ω = 0.67A. The two bulbs in parallel have the same resistance, so they divide the current equally; each one gets 0.33 amps. The single bulb in series gets the full current of 0.67 amps, but the other two bulbs get only 0.33 amps each. That means the bulbs in parallel will be much dimmer since they only get half the current.

36 20.3 Electric Power, AC, and DC Electricity
Key Question: How much does electricity cost and what do you pay for? *Students read Section AFTER Investigation 20.3

39 20.3 Power in electric circuits
One watt is a pretty small amount of power. In everyday use, larger units are more convenient to use. A kilowatt (kW) is equal to 1,000 watts. The other common unit of power often seen on electric motors is the horsepower. One horsepower is 746 watts.

46 20.3 Alternating and direct current
AC current is used for almost all high-power applications because it is easier to generate and to transmit over long distances. The 120 volt AC (VAC) electricity used in homes and businesses alternates between peak values of +170 V and -170 V at a frequency of 60 Hz. AC electricity is usually identified by the average voltage, (120 VAC) not the peak voltage.

48 20.3 Power in AC circuits For a circuit containing a motor, the power calculation is a little different from that for a simple resistance like a light bulb. Because motors store energy and act like generators, the current and voltage are not in phase with each other. The current is always a little behind the voltage.

50 Application: Wiring in Homes and Buildings

51 Application: Wiring in Homes and Buildings 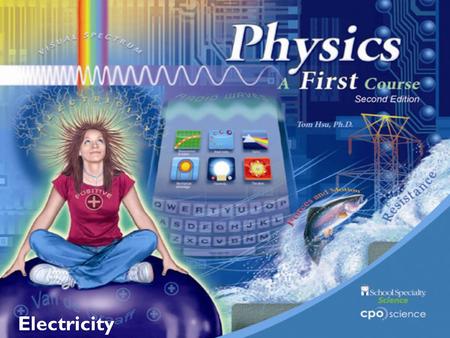 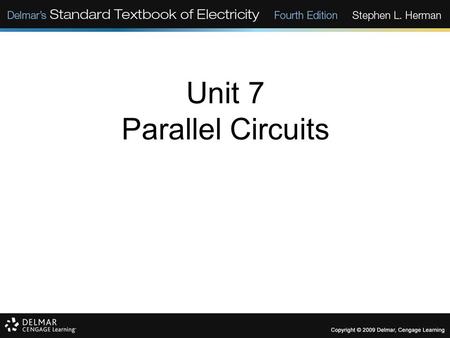 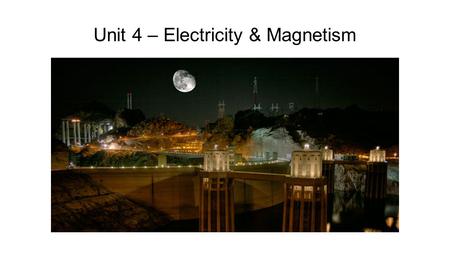 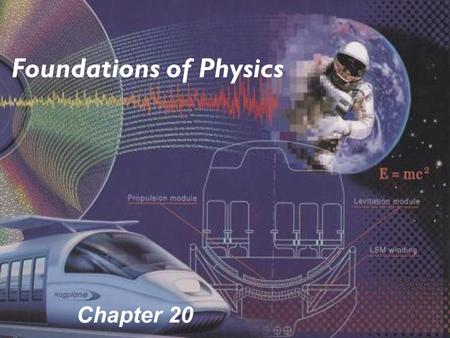 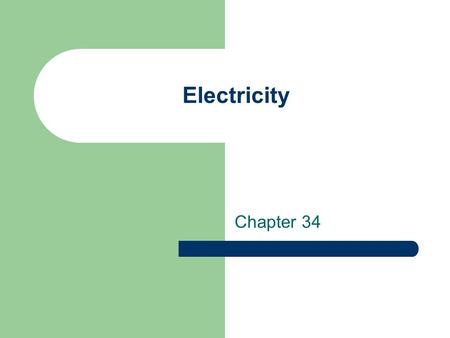 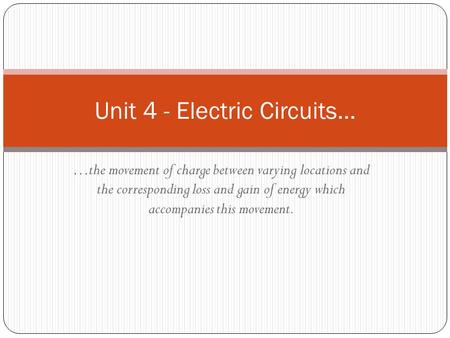 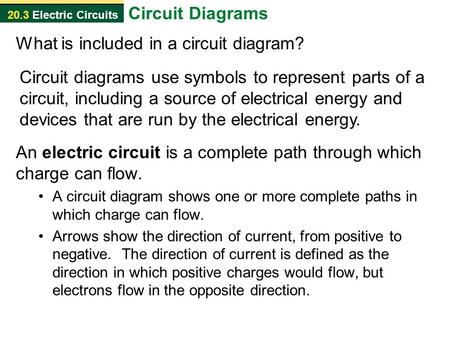 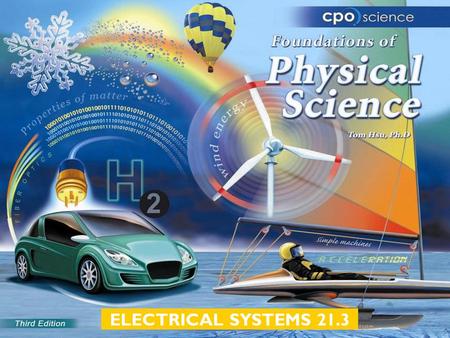 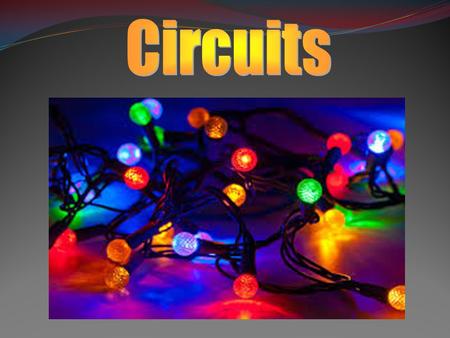 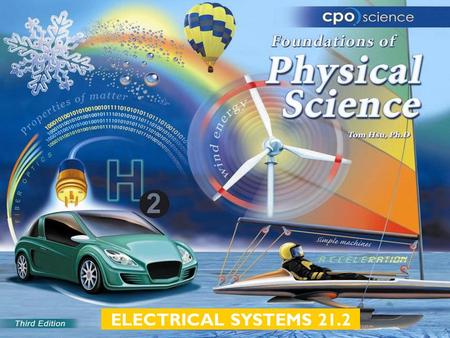 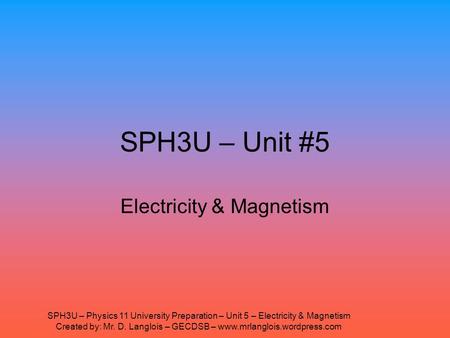 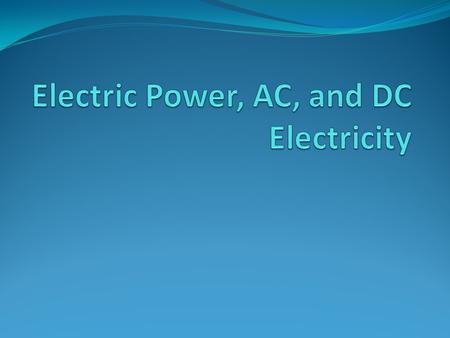 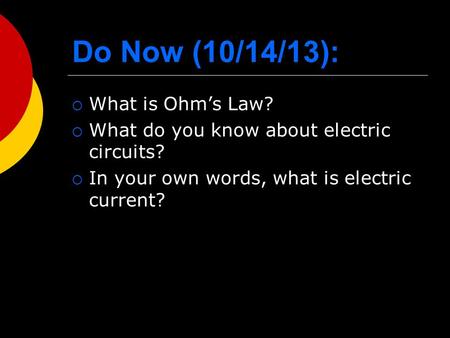