3 Warming of the climate system is unequivocal, as is now evident from observations of increases in global average air and ocean temperatures, widespread melting of snow and ice, and rising global mean sea level. Direct Observations of Recent Climate Change

6 At continental, regional, and ocean basin scales, numerous long-term changes in climate have been observed. These include: –Changes in Arctic temperatures and ice, –Widespread changes in precipitation amounts, ocean salinity, wind patterns –and aspects of extreme weather including droughts, heavy precipitation, heat waves and the intensity of tropical cyclones Direct Observations of Recent Climate Change

9 Warming in the Arctic is double that for the globe from 19 th to 21 st century and from late 1960s to present. Warmth 1925 to 1950 in Arctic was not as widespread as recent global warmth. Note different scales Arctic vs Global annual temperature anomalies (°C)

10 Further Changes in Artic and Frozen Ground Annual average Arctic sea ice extent shrunk by 2.7 % per decade, decreases in summer 7.4 % Temperatures at the top of permafrost layer have generally increased since the 1980s by up to 3°C The maximum area covered by seasonally frozen ground has decreased by about 7% in Northern Hemisphere since 1900, in spring of up to 15%.

11 Changes in Precipitation, Increased Drought Significantly increased precipitation in eastern parts of North and South America, northern Europe and northern and central Asia. The frequency of heavy precipitation events has increased over most land areas - consistent with warming and increases of atmospheric water vapour Drying in the Sahel, the Mediterranean, southern Africa and parts of southern Asia. More intense and longer droughts observed since the 1970s, particularly in the tropics and subtropics.

14 Smoothed annual anomalies for precipitation (%) over land from 1900 to 2005; other regions are dominated by variability. Land precipitation is changing significantly over broad areas Increases Decreases

15 The most important spatial pattern (top) of the monthly Palmer Drought Severity Index (PDSI) for 1900 to 2002. The time series (below) accounts for most of the trend in PDSI. Drought is increasing most places Mainly decrease in rain over land in tropics and subtropics, but enhanced by increased atmospheric demand with warming

22 Some aspects of climate have not been observed to change: Tornadoes Dust-storms Hail Lightning Antarctic sea ice Direct Observations of Recent Climate Change

23 Paleoclimate information supports the interpretation that the warmth of the last half century is unusual in at least the previous 1300 years. The last time the polar regions were significantly warmer than present for an extended period (about 125,000 years ago), reductions in polar ice volume led to 4 to 6 metres of sea level rise. A Paleoclimatic Perspective

29 Human and Natural Drivers of Climate Change The understanding of anthropogenic warming and cooling influences on climate has improved since the Third Assessment Report (TAR), leading to very high confidence that the globally averaged net effect of human activities since 1750 has been one of warming, with a radiative forcing of +1.6 [+0.6 to +2.4] W m -2.

33 Understanding and Attributing Climate Change Most of the observed increase in globally averaged temperatures since the mid-20th century is very likely due to the observed increase in anthropogenic greenhouse gas concentrations. This is an advance since the TAR’s conclusion that “most of the observed warming over the last 50 years is likely to have been due to the increase in greenhouse gas concentrations”. Discernible human influences now extend to other aspects of climate, including ocean warming, continental- average temperatures, temperature extremes and wind patterns

36 Projections of Future Changes in Climate Continued greenhouse gas emissions at or above current rates would cause further warming and induce many changes in the global climate system during the 21st century that would very likely be larger than those observed during the 20th century. Best estimate and assessed likelihood range for future temperature projections for first time Broadly similar to the TAR but not directly comparable

42 Projections of Future Changes in Climate There is now higher confidence in projected patterns of warming and other regional-scale features, including changes in wind patterns, precipitation, and some aspects of extremes and of ice.

43 Snow cover is projected to contract Widespread increases in thaw depth most permafrost regions Sea ice is projected to shrink in both the Arctic and Antarctic In some projections, Arctic late-summer sea ice disappears almost entirely by the latter part of the 21st century PROJECTIONS OF FUTURE IN CLIMATE PROJECTIONS OF FUTURE CHANGES IN CLIMATE

45 Based on current model simulations, it is very likely that the meridional overturning circulation (MOC) of the Atlantic Ocean will slow down during the 21st century. longer term changes not assessed with confidence Temperatures in the Atlantic region are projected to increase despite such changes due to the much larger warming associated with projected increases of greenhouse gases. PROJECTIONS OF FUTURE CHANGES IN CLIMATE

46 Anthropogenic warming and sea level rise would continue for centuries due to the timescales associated with climate processes and feedbacks, even if greenhouse gas concentrations were to be stabilized. Temperatures in excess of 1.9 to 4.6°C warmer than pre-industrial sustained for millennia…eventual melt of the Greenland ice sheet. Would raise sea level by 7 m. Comparable to 125,000 years ago. PROJECTIONS OF FUTURE CHANGES IN CLIMATE 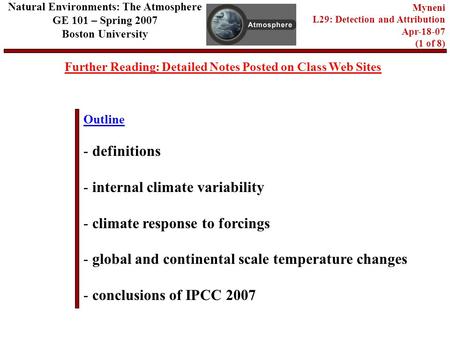 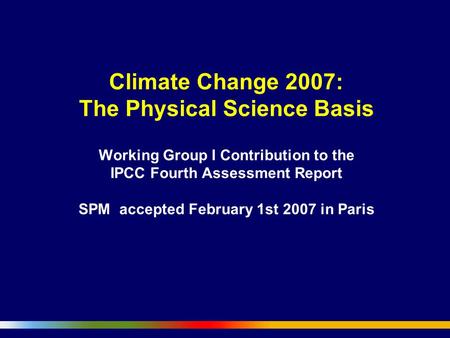 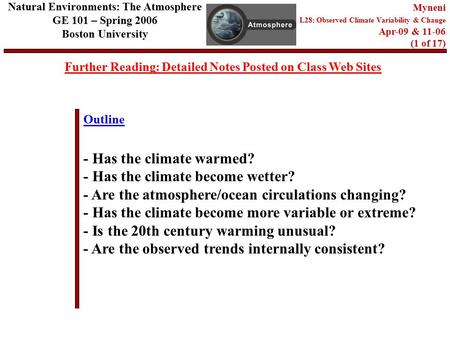 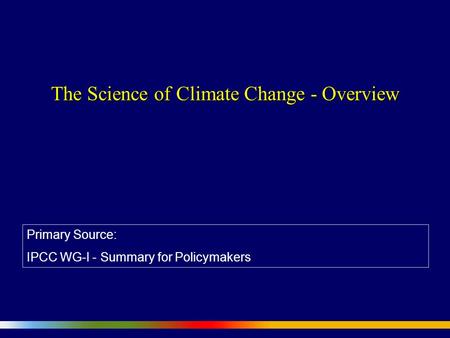 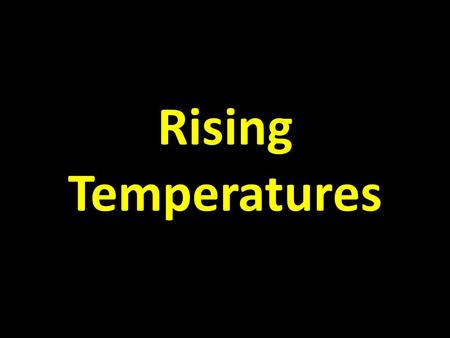 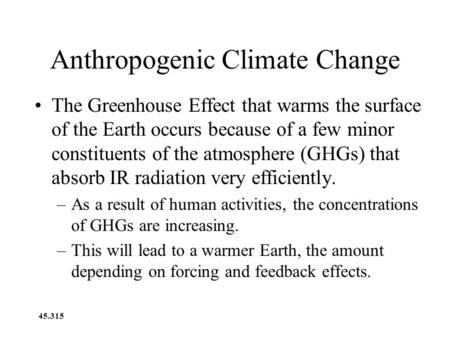 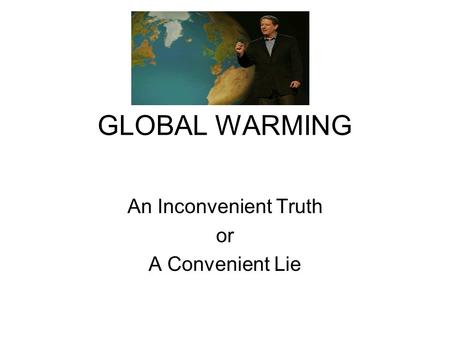 GLOBAL WARMING An Inconvenient Truth or A Convenient Lie. 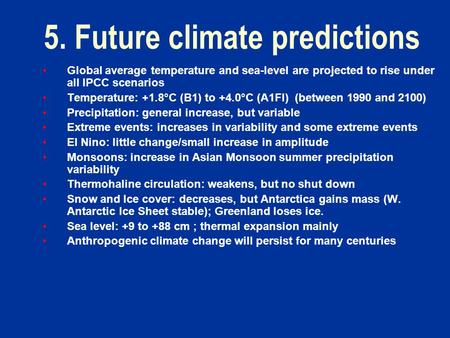 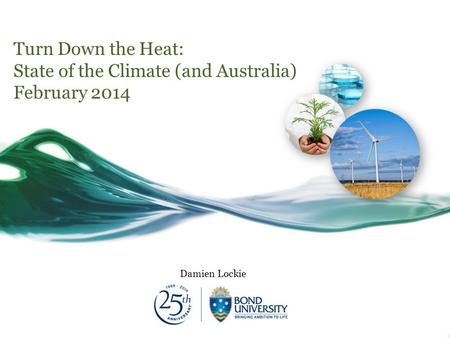