4 Normal Sinus Rhythm Sinus node is the pacemaker, firing at a regular rate of bpm. Each beat is conducted normally through to the ventricles Regularity: regular Rate: beats per minute P Wave: uniform shape; one P wave for each QRS PRI: seconds and constant QRS: .04 to .1 seconds

5 Sinus Bradycardia Sinus node is the pacemaker, firing regularly at a rate of less than 60 times per minute. Each impulse is conducted normally through to the ventricles Regularity: The R-R intervals are constant; Rhythm is regular Rate: Atrial and Ventricular rates are equal; heart rate less than 60 P Wave: Uniform P wave in front of every QRS PRI: PRI is between and constant QRS: QRS is less than .12

6 Sinus Tachycardia Sinus node is the pacemaker, firing regularly at a rate of greater than 100 times per minute. Each impulse is conducted normally through to the ventricles . Regularity: The R-R intervals are constant; Rhythm is regular Rate: Atrial and Ventricular rates are equal; heart rate greater than 100 P Wave: Uniform P wave in front of every QRS PRI: PRI is between and constant QRS:QRS is than .12

7 Atrial Flutter A single irritable focus within the atria issues an impulse that is conducted in a rapid, repetitive fashion. To protect the ventricles from receiving too many impulses, the AV node blocks some of the impulses from being conducted through to the ventricles. Regularity: Atrial rhythm is regular. Ventricular rhythm will be regular if the AV node conducts impulses through in a consistent pattern. If the pattern varies, the ventricular rate will be irregular Rate: Atrial rate is between beats per minute. Ventricular rate will depend on the ratio of impulses conducted through to the ventricles. P Wave: When the atria flutter they produce a series of well defined P waves. When seen together, these "Flutter" waves have a sawtooth appearance. PRI: Because of the unusual "Flutter" configuration of the P wave and the proximity of the wave to the QRS comples, it is often impossible to determine a PRI in the arrhythmia. Therefore, the PRI is not measured in Atrial Flutter. QRS: QRS is less than .12 seconds; measurement can be difficult if one or more flutter waves is concealed within the QRS complex.

8 Atrial Fibrillation The atria are so irritable that a multitude of foci initiate impulses, causing the atria to depolarize repeatedly in a fibrillatory manner. The AV node blocks most of the impulses, allowing only a limited number through to the ventricles. Regularity: Atrial rhythm is unmeasurable; all atrial activity is chaotic. The ventricular rhythm is grossly irregular, having no pattern to its irregularity. Rate: Atrial rate cannot be measured because it is so chaotic; research indicates that it exceeds 350 beats per minute. The ventricular rate is significantly slower because the AV node blocks most of the impulses. If the ventricular rate is below 100 beats per minute, the rhythm is said to be "controlled"; if it is over 100 bpm, it is considered to have a "rapid ventricular response." P Wave: In this arrhythmia the atria are not depolarizing in an effective way; instead, they are fibrillating. Thus, no P wave is produced. All atrial activity is depicted as "fibrillatory" waves, or grossly chaotic undulations of the baseline. PRI: Since no P waves are visible, no PRI can be measured. QRS: QRS is less than .12

9 Ventricular Tachycardia
An irritable focus in the ventricles fires regularly at a rate of beats per minute to override higher sites for control of the heart. Regularity: This rhythm is usually regular, although it can be slightly irregular. Rate: Atrial rate cannot be determined. The ventricular rate range is beats per minute. If the rate is below 150 bpm, it is considered a slow VT. If the rate exceeds 250 bpm, its called Ventricular Flutter. P Wave: None of the QRS complexes will be preceded by P waves; you may see dissociated P waves intermittently across the strip. PRI: Since the rhythm originates in the ventricles, there will be no PRI. QRS: The QRS complexes will be wide and bizarre, measuring at least .12 seconds. It is often difficult to differentiate between the QRS and the T wave.

11 AV Block 2 First Degree The AV node selectively conducts some beats while blocking others. Those that are not blocked are conducted through to the ventricles, although they may encounter a slight delay in the node. Once in the ventricles, conduction proceeds normally. Regularity: If the conduction ratio is consistent, the R-R interval will be constant, and the rhythm will be regular. If the conduction ratio varies, the R-R will be irregular. Rate: Atrial rate is usually normal; since many of the atrial impulses are blocked, the ventricular rate will usually be in the bradycardia range, often one-half, one-third, or one-fourth of the atrial rate. P Wave: Upright and uniform; there are always more P waves than QRS complexes. PRI: PRI on conducted beats will be constant across the strip QRS: QRS is less than .12

12 AV Block 2 Second Degree As the sinus node initiates impulses, each one is delayed in the AV node a little longer than the preceding one, until one impulse is eventually blocked completely. Those impulses that are conducted travel normally through the ventricles. Regularity: Irregular; the R-R interval gets shorter as the PRI gets longer. Rate: Usually slightly slower than normal P Wave: Upright and uniform; some P waves are followed by QRS complexes. PRI: Progressively lengthens until one P wave is blocked QRS: QRS is less than .12 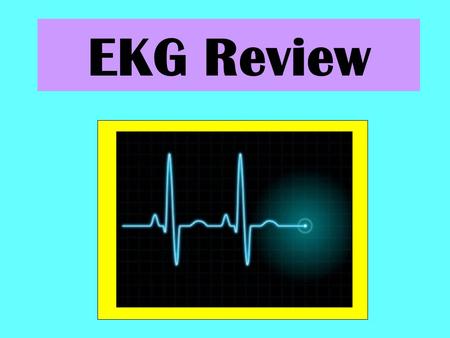 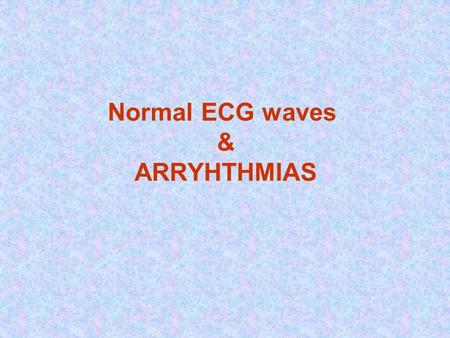 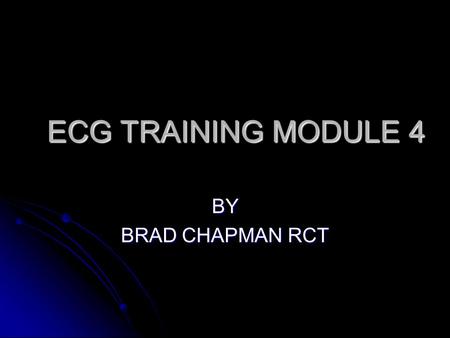 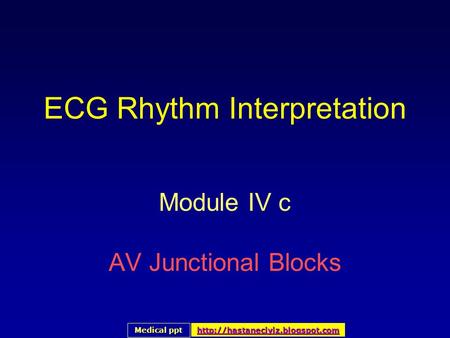 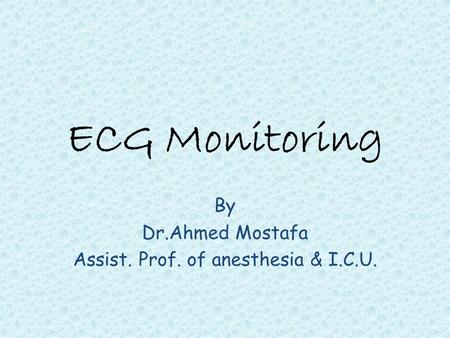 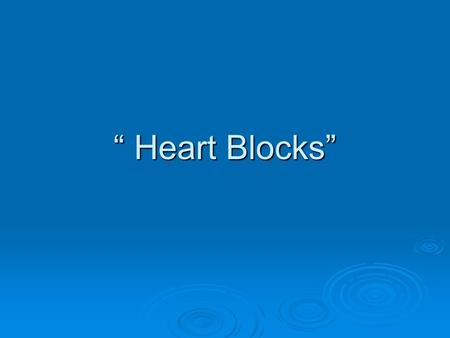 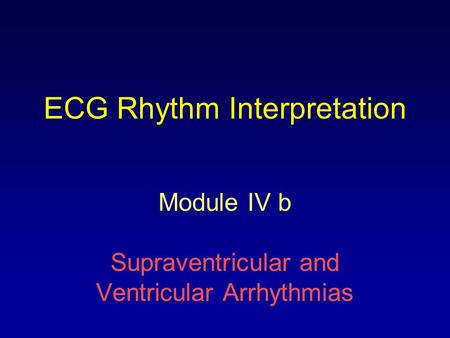 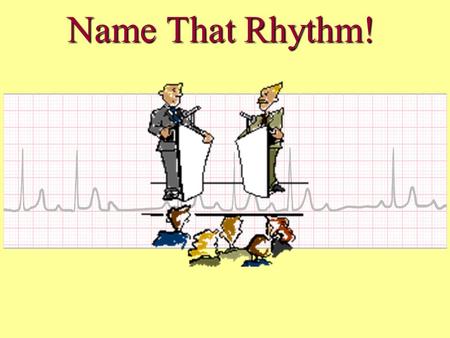 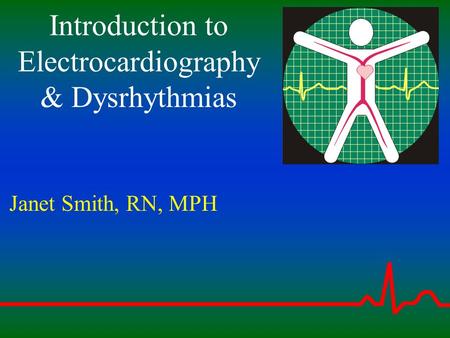 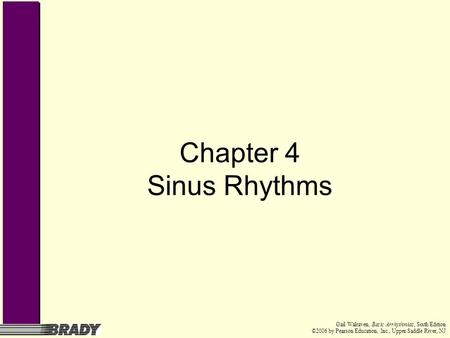 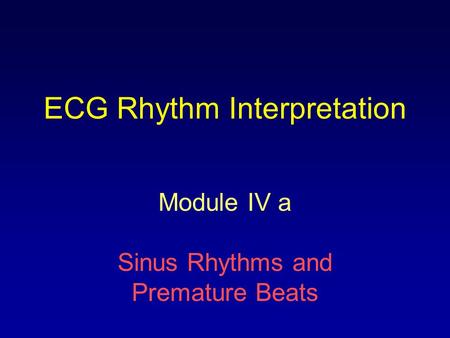 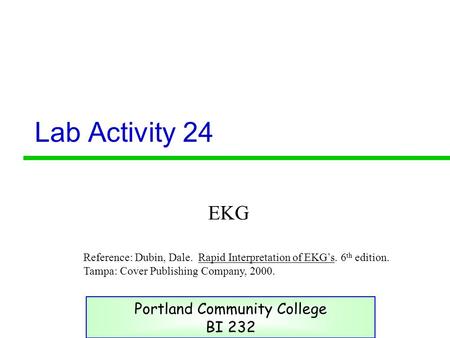 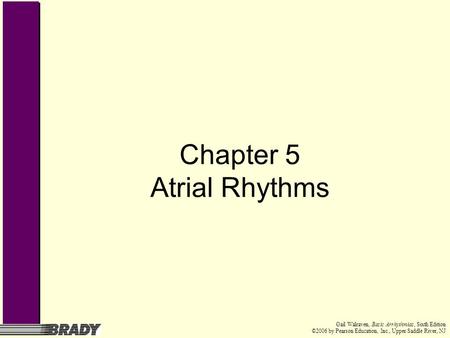 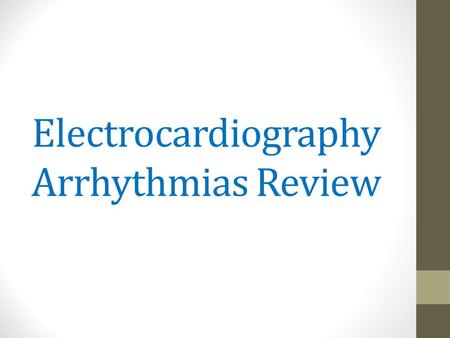 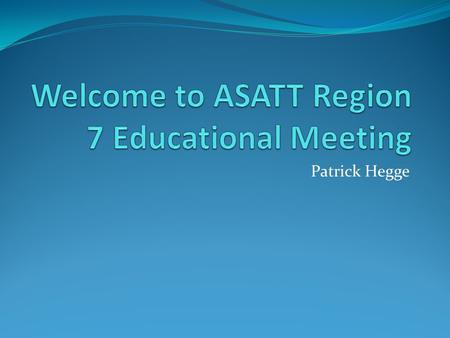 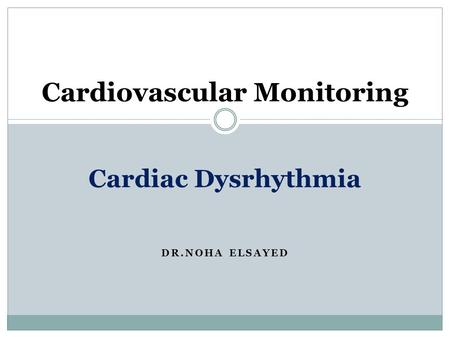 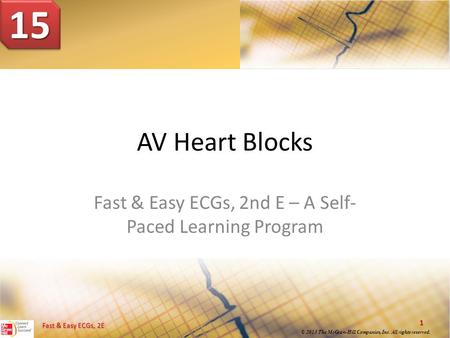 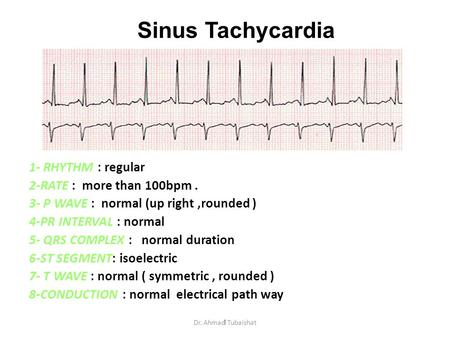 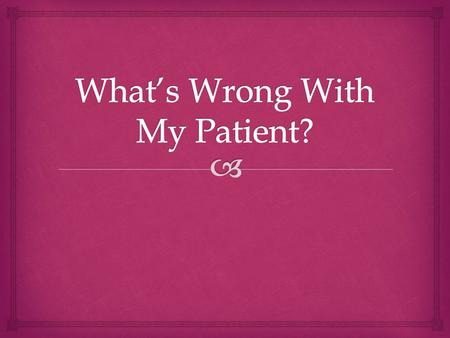 What’s Wrong With My Patient? 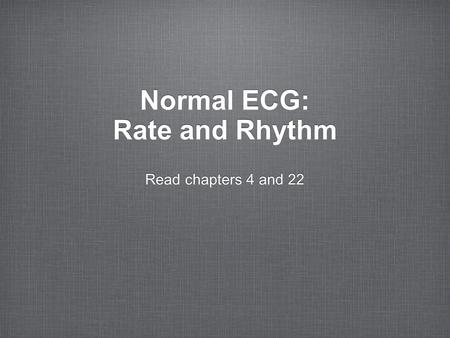