1 Time Before the Revolutionary War
By Kate, Hanna and Sommer

2 The Sugar Act On April 5, 1764, England's Parliament passed a modified version of the Sugar and Molasses Act (which was set in 1733), which was about to expire. Under the Sugar Act, colonial merchants had been required to pay a tax of sixpence (coins) per item on the importation of foreign molasses/sugar. The colonists were very upset by this and began to boycott.

4 Tax Tax Tax The Stamp Act
On March 22, 1765, the Stamp Act was passed by Parliament without debate. The Stamp Act was that the people had to pay taxes on newspapers, legal documents and other everyday items. It also meant that shopkeepers would have to put a stamp of the taxation on the product. Tax Tax Tax

5 The Townshend Act This was a tax on paint, glass, lead, paper and tea. These also were very important items to the colonists to use.

6 The Tea Act Tea was the main drink for the people of America. When the king taxed the tea, the colonists were very mad. The Tea Act, passed by Parliament on May 10, 1773, would launch the final spark to the revolutionary movement in Boston. The act was not intended to raise revenue in the American colonies.

7 Groups of the Revolution
The main group of people were the Sons of Liberty. They were the ones responsible for the Boston Tea Party also. They were very against the King and his taxes.

9 Stamp Act Congress The Stamp Act Congress, or First Congress of the American Colonies, was a meeting held in New York City, consisting of representatives from some of the British colonies in North America; it was the first gathering of elected representatives from several of the American colonies to talk about a protest against new British taxation. Parliament had passed the Stamp Act, which required the use of specially stamped paper for virtually all business in the colonies.

10 Nonimportation Agreements
Colonial resistance to British control took many forms, perhaps the most effective was the non-importation agreements. Such agreements appeared as early as They had a chilling effect on the British Merchants who traded with the colonies. The Stamp Act was repealed, eventually, based on appeals from Merchants who lost money shipping goods to a land that would not receive them.

11 The Boston Massacre British soldiers fired at the people of Boston after they threw snow at them. 5 people died in the attack. This made the colonists furious.

12 Boston Tea Party The Boston tea Party was the last revolt before the war. The Sons of Liberty dressed up as Native Americans and stormed the ship with tons of pounds of tea on them. They threw it all overboard. That cost England lots of money. 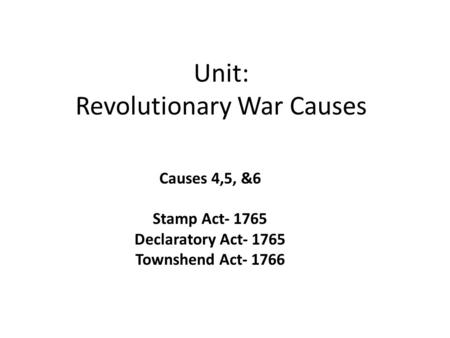 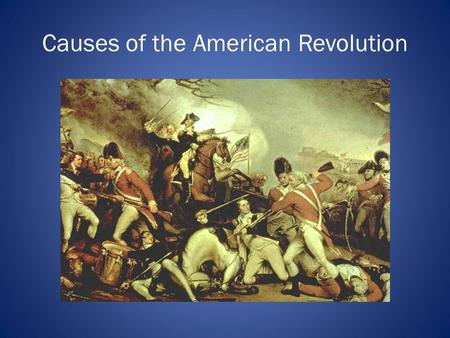 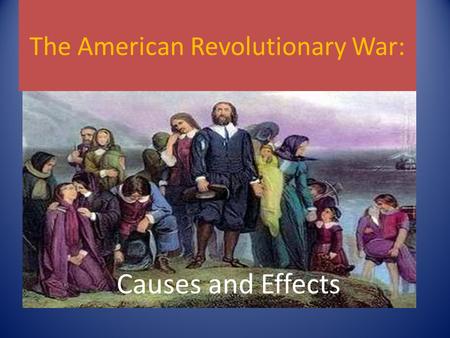