Presentation on theme: "Organic Compounds Necessities for Life. What is an organic compound? In Biology, the word organic means “relating to organisms” NOT food grown without."— Presentation transcript:

4 Carbon can also bond to other carbon atoms, which gives carbon the ability to form chains that are almost unlimited in length. These carbon-carbon bonds can be single, double, or triple. The chains be straight, branched, or even ring-shaped. Therefore, carbon is unique in that it can form millions of different large and complex structures.

5 MACROmolecules are giant and are... formed by polymerization, in which large compounds (polymers) are built from joining smaller units (monomers) together.

7 Carbohydrates (sugars) main source of energy for organisms can also be used for structural purposes made of C, H, and O; usually in a 1:2:1 ratio The monomers of carbohydrates are called monosaccharides, like glucose, fructose (in fruits) and galactose (in milk). The breakdown of monosaccharides supplies immediate energy. usually end in –ose.

11 Lipids Many lipids are formed when a glycerol molecule combines with fatty acids. If all carbon atoms have only single bonds, the lipid is saturated. It holds as many hydrogen atoms as possible.

12 Lipids If there is at least one double bond between carbon atoms, the lipid is unsaturated. Unsaturated lipids like cooking oils tend to be liquid at room temperature.

13 Nucleic Acids store and transmit hereditary, or genetic, information contain hydrogen, carbon, nitrogen, oxygen, and phosphorus The monomers of nucleic acids are nucleotides, which contain three parts: a 5- carbon sugar, a phosphate group, and a nitrogen base. examples: DNA and RNA

14 Proteins have many functions They can provide structural support in bones and muscles, form parts of cell membranes, function as hormones to regulate the body, form antibodies to protect against infection, and increase the rate of chemical reactions to name a few.

15 Proteins are macromolecules. contain nitrogen, carbon, hydrogen, and oxygen (most also have sulfur) The monomers of proteins are amino acids. Amino acids contain an amino group, a carboxyl group, and a variable R-group.

16 When the amino acids join, they form a polymer called a polypeptide. The monomers are held together by peptide bonds. More than 20 different amino acids are found in nature. Since the R-group varies, it allows for much variety. That is why proteins have so many functions.

17 Proteins have four levels of organization. This allows for the unique shape of proteins. Shape is very important; if a protein is not the right shape, it will not work.

18 Enzymes – a special type of protein Enzymes are biological catalysts, which work to speed up a chemical reaction. Without enzymes, several reactions in cells would never occur or happen to slowly to be useful.

20  When activation energy is lowered, the reaction speeds up.

21 Enzyme Action  Enzymes provide a site where reactants can be brought together to react.  This is site is called the active site.  The reactants are called the substrates.  The shape of an enzyme is so specific that generally only one enzyme will work for one substrate.  Therefore, enzymes are said to fit together like a “lock and key.”

22 Enzyme Action Since only the substrate changes during the reaction, the enzyme can be reused again and again.

23 Enzymes can be turned on and off.  Enzymes work best at specific temperatures and pH.  Heating can change the enzyme shape and the wrong pH affects the binding of the substrate to the enzyme.  Ergo, enzymes in our body work best at 37°C (98.6°F) and at a pH between 6.5 to 7.5.  Also, most cells contain proteins that turn enzymes on or off during critical stages of development.

Download ppt "Organic Compounds Necessities for Life. What is an organic compound? In Biology, the word organic means “relating to organisms” NOT food grown without." 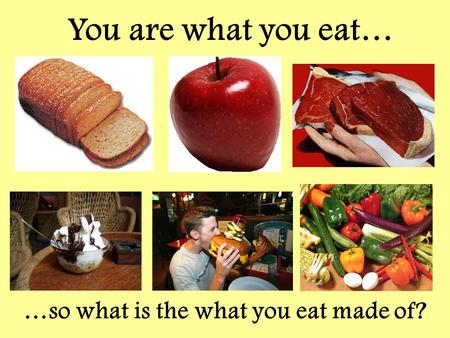 …so what is the what you eat made of?