2 Standard Amplitude Modulation (AM)
In the DSP-SC demodulation, a receiver must generate a local carrier in frequency and phase synchronism with the carrier used for modulation. This call for a sophisticated receiver and could be quit costly. The other alternative is for the transmitter to transmit a carrier Ac cos (ωct) along with the modulated signal m(t) cos (ωct). so there is no need to generate a carrier at the receiver and this is the idea of the standard AM.

5 Modulation – case 1 When ( is nonnegative) for all value of t.
The envelop has the same shape as m(t). Hence, we can recover m(t) from this envelop. At the receiver, the detection is extremely simple and inexpensive operation, which doesn’t require generation of a local carrier for demodulation.

6 Modulation – case 2 The condition is not satisfied.
The envelop shape is not as m(t). So, we can’t recover m(t) from this envelop. We can’t build a simple receiver.

7 Modulation Index Let Am the peak amplitude of m(t) and Ac is the carrier amplitude. We define modulation index as: When : this mean that for all t and the SAM(t) (modulated signal) can be demodulated by the envelop detector. When (overmodulation): this mean that A + m(t) is not ≥ 0 for all t and the option of envelop detection is no longer viable.

8 Spectrum The spectrum of the modulated signal SAM(t) is the same as that of m(t) cos (ωct) plus tow additional impulses at + ωc and - ωc . If then

10 Spectrum The modulated signal spectrum centered at ωc is composed of three parts: An impulse at the carrier frequency ωc The upper sideband (USB), a portion that lies above ωc whose highest frequency component is at ωc + ωM The lower sideband (LSB), a portion that lies below ωc whose lowest frequency component is at ωc - ωM The bandwidth of the modulated waveform is twice the information signal bandwidth.

12 Demodulation In the standard AM modulation, the modulation index should be in order to demodulate the received modulated signal by using an envelop detector.

14 Introduction Standard AM and DSB-SC modulations has two sidebands: LSB and USB. These two methods waste the channel bandwidth because they both require a transmission bandwidth equal to twice the message bandwidth.

15 Introduction Note that the USB and the LSB are symmetric about the carrier frequency. Hence, given the spectra of either sideband, we can determine the other. So, the transmission of either sideband is sufficient to reconstruct the message signal m(t) at the receiver. Thus, the bandwidth of the transmitted signal ( modulated signal) will be the bandwidth of the modulating signal ( baseband signal)

16 Single-Sideband (SSB) Modulation
In single-sideband (SSB) modulation just only one sideband is transmitted.

17 Generation of SSB Signals
One way to generate an SSB signal is to: generate a DSB signal first, and then suppress one of its sidebands by filtering ( band-pass filter designed to pass one of the sidebands of the modulated signal)

19 Demodulation Demodulation of SSB signals can be achieved easily by using the coherent detector as used in the DSB demodulation, that is, by multiplying  by a local carrier and passing the resulting signal through a low-pass filter.

22 Vestigial-Sideband (VSB) modulation
Vestigial-Sideband (VSB) modulation is a compromise between SSB and DSB modulations. In this modulation scheme, one sideband is passed almost completely, whereas just a trace, or vestige, of the other sideband is retained.  The typical bandwidth required to transmit a VSB signal is about 1.25 that of SSB. VSB is used for transmission of the video signal in commercial television broadcasting.

23 Generation of VSB Signals
A VSB signal can be generated by passing a DSB signal through a sideband-shaping filter [VSB filter].

25 Demodulation of VSB The m(t) can be recovered by synchronous or coherent demodulation , that is, by multiplying  by a local carrier and passing the resulting signal through a low-pass filter. 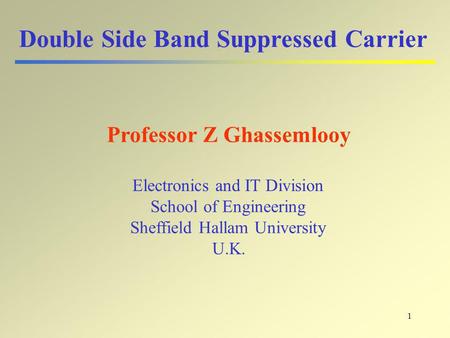 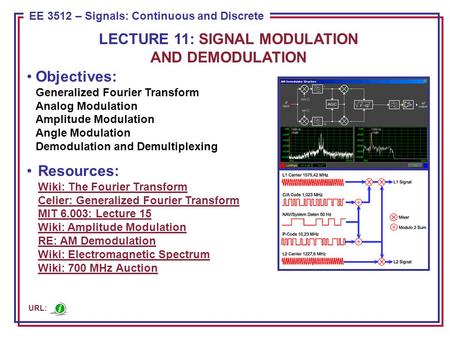 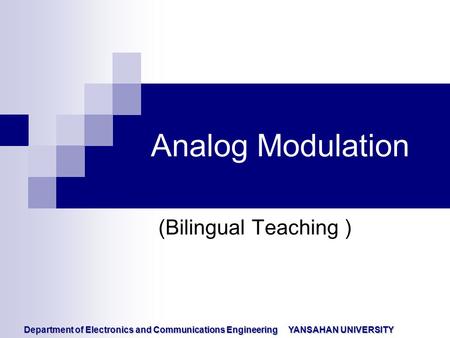 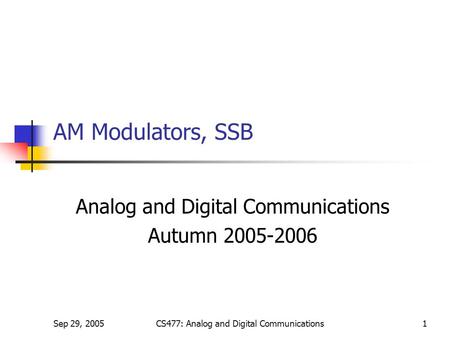 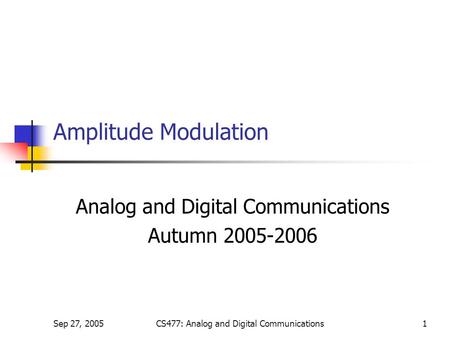 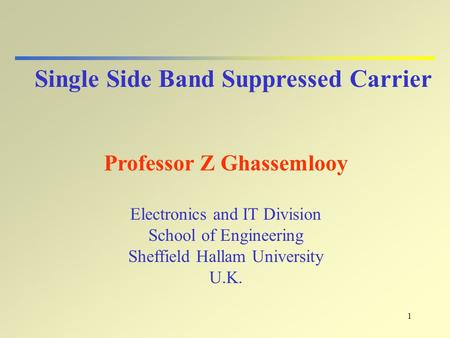 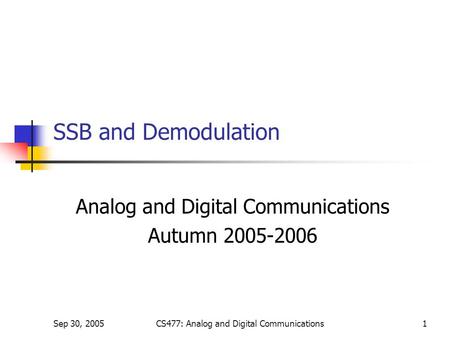 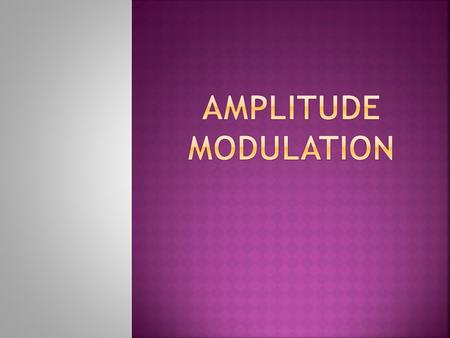 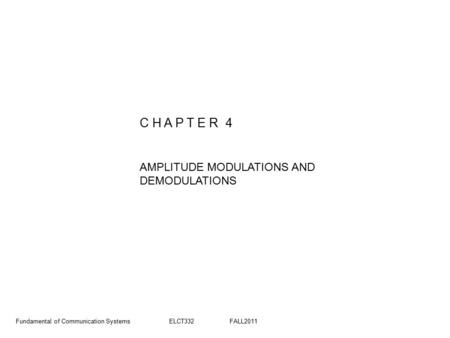 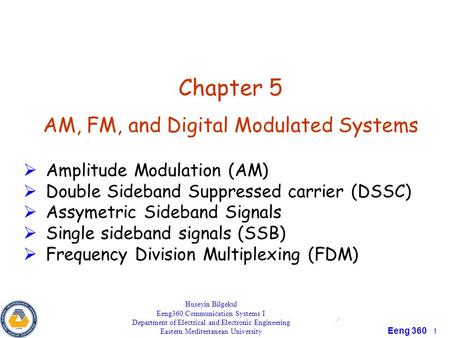 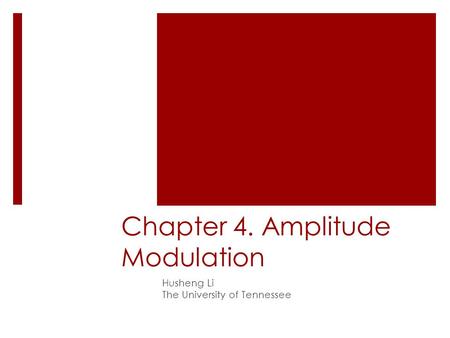 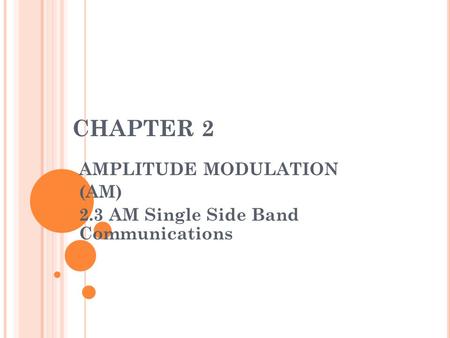 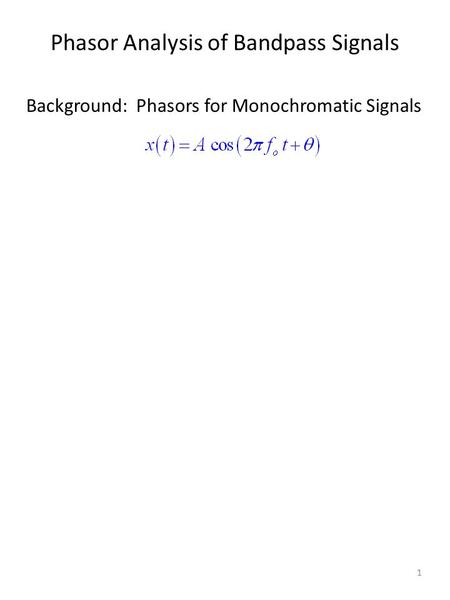