Presentation on theme: "EMU, the Euro, and the Current Economic Situation in the Euro Area Presentation by Amy Medearis Senior Economist, Delegation of the European Commission."— Presentation transcript:

1 EMU, the Euro, and the Current Economic Situation in the Euro Area Presentation by Amy Medearis Senior Economist, Delegation of the European Commission Seminar on EU and the Euro, organized by EUCE at UNC-Chapel Hill May 8 th, 2009

2 1 What are we going to cover? The Euro: how did we get there? What is EMU? What are the costs and benefits of having a single currency? Benefits of EU versus euro membership? How is economic policy made in a monetary union? What is the current economic situation in the Euro Area? How should Europe deal with the current economic and financial crisis? And what does the crisis mean for EMU?

3 2 A Brief History of European Economic Integration The original goal behind the integration of Europe was to prevent the devastating wars of the first half of the twentieth century from ever happening again… Dresden, Germany, 1945.

5 4 A Brief History of European Economic Integration The euro was already envisaged as a goal back at the start of European integration in 1950s It was always seen as the “next logical step” after the single market The idea gained academic attention through the work of economist like Robert Mundell (“Optimal Currency Areas”) Break-up of the gold standard in the 1970s led to creation of the forerunners of the euro, European Monetary System (EMS) and Exchange Rate Mechanism (ERM) German reunification (1990) and currency crisis of 1992 as catalysts for push toward the euro leading to Maastricht Treaty in 1992/93?

9 8 What are the three parts of EMU? 1) The euro – countries give up their own currency when they join the euro area. The ECB sets interest rates for the euro area (16) 2) The single market – all countries participate in the single market, with free movement of goods, services, capital and people (27) 3) Enhanced policy coordination – countries retain sovereignty over other economic policies but commit to coordinate more closely at the European level (27/16)

12 11 What are the benefits of the euro? And the costs? CITIZENS benefit from greater price transparency, which should stimulate competition and reduce prices and from the elimination of currency exchange costs For BUSINESSES it is easier to make investment decisions (no exchange rate risk) The ECONOMY benefits from price stability, and lack of exchange rate risk Countries that adopt the euro can no longer change their INTEREST RATE or their EXCHANGE RATE. In a monetary union, you cannot have an INDEPENDENT MONETARY POLICY.

14 13 The single market – economies of scale Larger firms enjoy cost advantages over smaller firms (e.g. purchasing, marketing) EU firms can produce for a market of 500m consumers And pass on lower costs to consumers This should encourage economic efficiency and stimulate economic growth

18 17 2009: Happy 10 th Birthday, euro! The euro has helped to bring Europeans together It has fostered greater economic integration (reinforcing the Single Market) It has contributed to macroeconomic stability (e.g. lower inflation) But now the euro area is confronted by a very dire economic situation

20 19 Why is the euro area so affected? US and euro area economies are closely connected Many European banks bought securities tied to US subprime loans German exports have fallen sharply Spanish and Irish housing bubbles have burst Euro area economy is less flexible, has lower productivity growth Exposure to Eastern Europe? “Toto, I don’t think we’re in Kansas anymore”

23 22 EMU and the financial crisis Crisis exposes persistent divergences in the euro area “One size fits all monetary policy” problematic? Countries need to use fiscal stimulus, just as in US But difficult to coordinate fiscal response of 16 Member States Break-up of EMU?

24 23Conclusions The launch of the euro was a tremendous achievement for the EU But EMU is still a work in progress (especially for the “E” part) The euro area is in its first recession; how will it cope? Will the crisis lead to further divergence in EMU, or will it encourage countries to speed up reforms? Can you have a monetary union without a complete economic union? Political union ?

Download ppt "EMU, the Euro, and the Current Economic Situation in the Euro Area Presentation by Amy Medearis Senior Economist, Delegation of the European Commission." 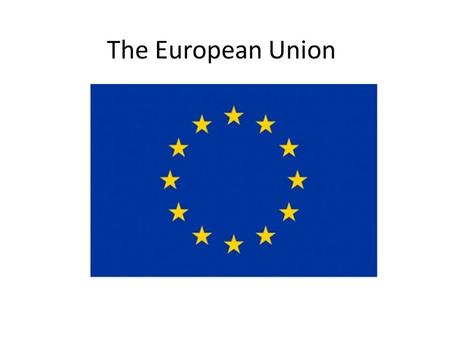