2 Moment of Force The turning effect of a force (torque) is known as the moment. It is the product of the force multiplied by the perpendicular distance from the line of action of the force to the pivot or point where the object will turn.

4 (Cont…) Unit: pound-feet (lb), pound-inches (lb-in), kip-feet (kip-fit) or Newton-meter (Nm) Moments taken are about a point are indicate as being clockwise( ) or counterclockwise ( ) For the sake of uniformity in calculation, assume clockwise to be +ve and counterclockwise to be -ve. Moment can exspressed as 10 lb-ft ( ), lb-ft or 10 lb.ft.

9 Example 3.3 A 200 N force acts on the bracket shown in Figure. Determine the moment of the force about point A.

14 This is the same answer that we obtained when we multiplied the individual forces by their distance from the pivot. Notice that when calculate moment, specified the points or moment about which the moments were calculated. It does not matter where the moment center is located when deal with couples. A couples has the same moment about all points on a body

16 Example 3.4 Determine the moment of the couple acting on the member shown in Figure

17 Moment in 3Dimensional Vector analysis
Moments in 3-D can be calculated using scalar (2-D) approach but it can be difficult and time consuming. Thus, it is often easier to use a mathematical approach called the vector cross product. Using the vector cross product, MO = r  F . Here r is the position vector from point O to any point on the line of action of F.

18 In general, the cross product of two vectors A and B results in another vector C , i.e., C = A  B. The magnitude and direction of the resulting vector can be written as C = A  B = A B sin  UC Here UC is the unit vector perpendicular to both A and B vectors as shown (or to the plane containing the A and B vectors).

19 The right hand rule is a useful tool for determining the direction of the vector resulting from a cross product. For example: i  j = k Note that a vector crossed into itself is zero, e.g., i  i = 0

20 Of even more utility, the cross product can be written as
Each component can be determined using 2  2 determinants

21 So, using the cross product, a moment can be expressed as
By expanding the above equation using 2  2 determinants, we get (sample units are N - m) MO = (r y FZ - rZ Fy) i - (r x Fz - rz Fx ) j (rx Fy - ry Fx ) k The physical meaning of the above equation becomes evident by considering the force components separately and using a 2-D formulation.

22 Example The pole in Fig. Below is subjected to a 60N force that is directed from C to B. Determine the magnitude of the moment created by this force about the support at A.

25 Example Determine the couple moment acting on the pipe shown in Fig. 3.24a. Segment AB is directed 30 below the x-y plan

29 Resultant A force and couple system
When a rigid body is subjected to a system of forces and couple moments The external effects on the body by replacing the system by an equivalent single resultant force acting at a specified point O and a resultant couple moment Point O is not on the line of action of the forces, an equivalent effect is produced if the forces are moved to point O and the corresponding couple moments M1=r1xF1 and M2=r2xF2 are applied to body

30 AN EQUIVALENT SYSTEM (Section 4.7)
= When a number of forces and couple moments are acting on a body, it is easier to understand their overall effect on the body if they are combined into a single force and couple moment having the same external effect The two force and couple systems are called equivalent systems since they have the same external effect on the body. Statics:The Next Generation Mehta & Danielson Lecture Notes for Sections

31 MOVING A FORCE ON ITS LINE OF ACTION
Moving a force from A to O, when both points are on the vectors’ line of action, does not change the external effect. Hence, a force vector is called a sliding vector. (But the internal effect of the force on the body does depend on where the force is applied). Statics:The Next Generation Mehta & Danielson Lecture Notes for Sections

32 MOVING A FORCE OFF OF ITS LINE OF ACTION
Moving a force from point A to O (as shown above) requires creating an additional couple moment. Since this new couple moment is a “free” vector, it can be applied at any point P on the body. Statics:The Next Generation Mehta & Danielson Lecture Notes for Sections

34 Example 3.5 Replace the forces acting on the brace shown in Figure by an equivalent resultant and couple moment acting at point A.

40 Exercise 3: Replace the three forces shown with an equivalent force-couple system at A. F1 F2 F3

41 To find the equivalent set of forces at A.

43 Find the moments about point A.
The force at O can be broken up into its two components in the x and y direction Using the line of action for each component, their moment contribution can be determined. 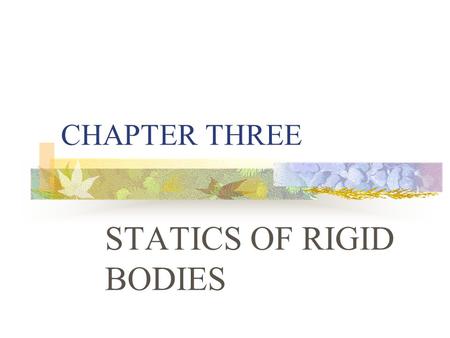 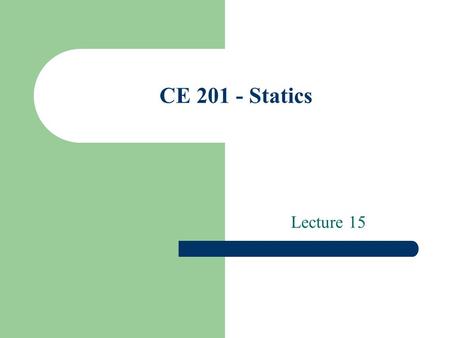 CE Statics Lecture 15. Moment of a Force on a Rigid Body If a force is to be moved from one point to another, then the external effects of the force. 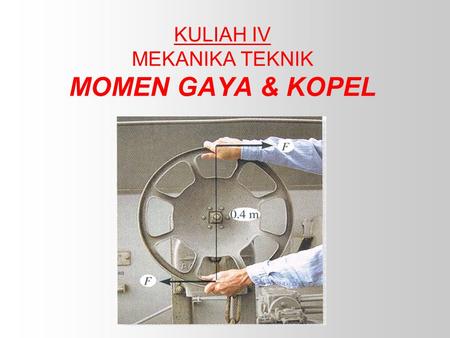 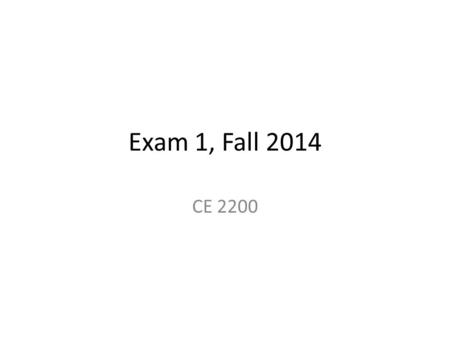 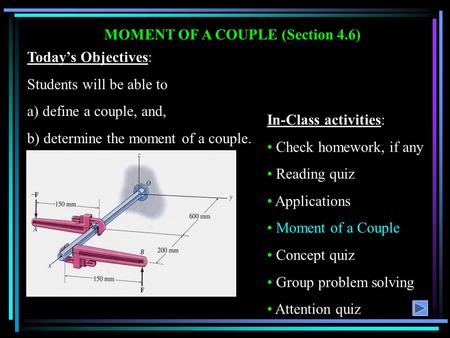 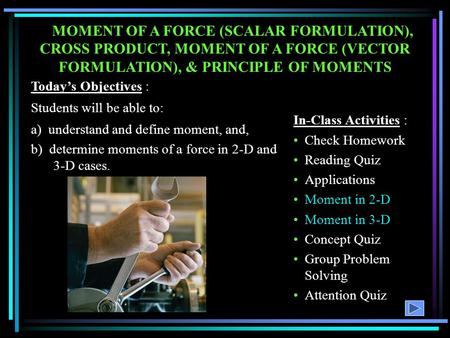 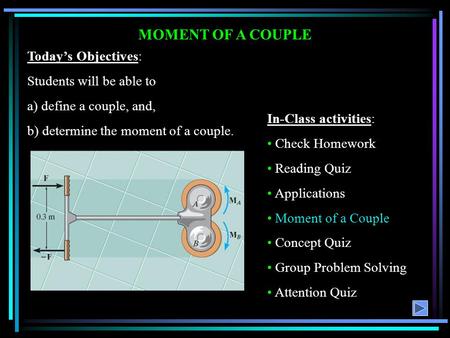 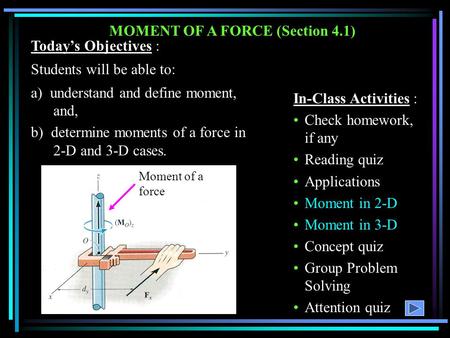 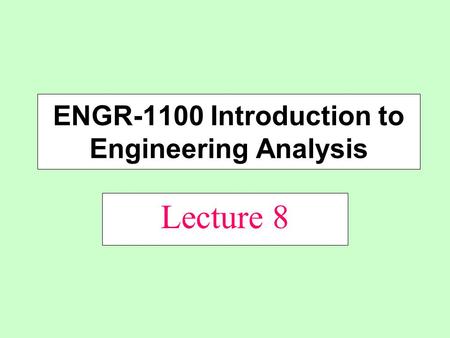 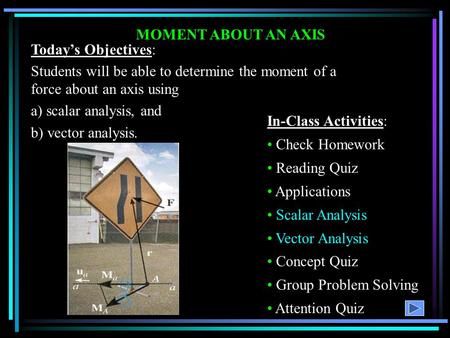 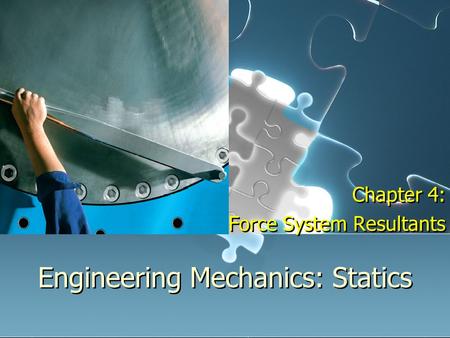 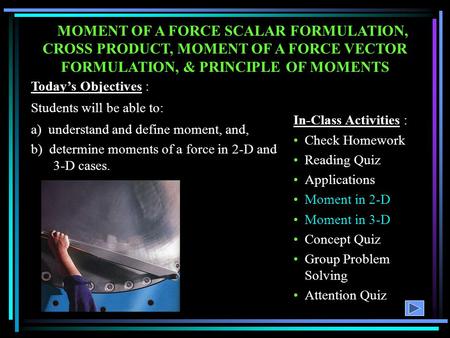 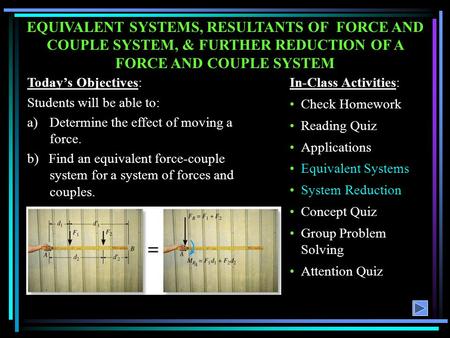 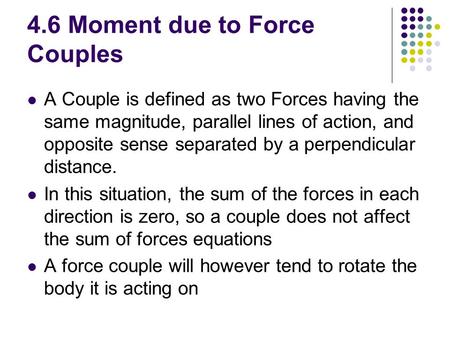 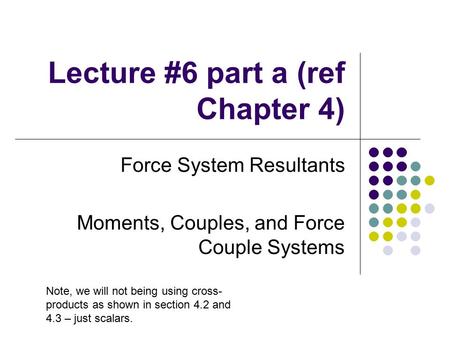 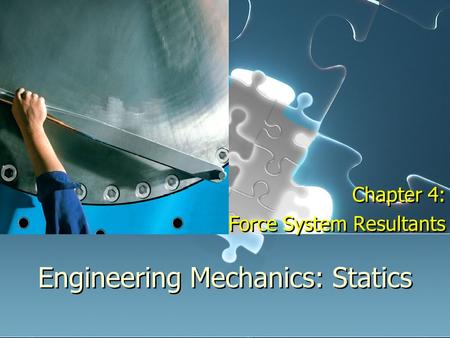 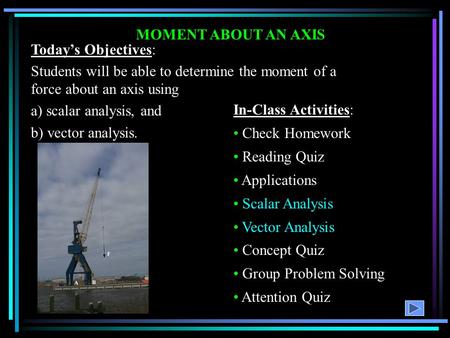 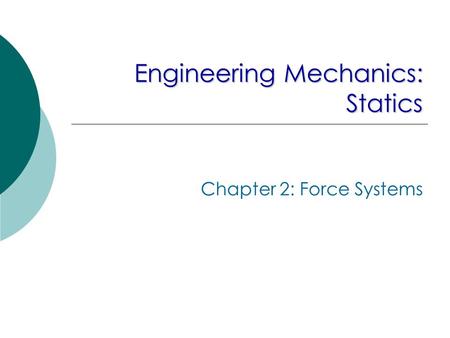 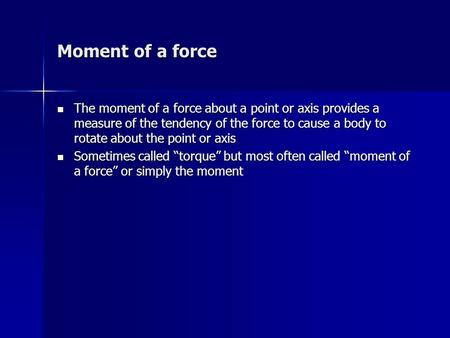 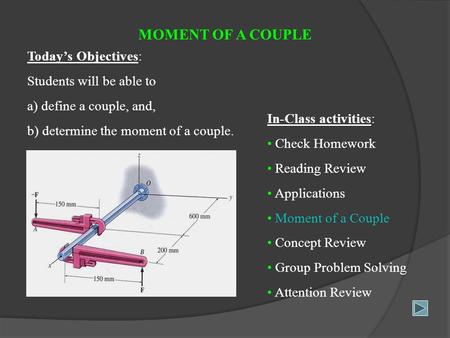