2 PLACE/TIME PERIOD OF ORIGIN
The exact place and time period that Hinduism was founded is not known. It is believed that Hinduism may have emerged somewhere near India, possibly 5,000 years ago (around 3,000 B.C.E). Because of this approximate date of origin, Hinduism is considered the oldest organized religion in the world.

4 Monotheistic or Polytheistic?
Although there are multiple gods in Hinduism, Hindus do not consider themselves polytheistic. All Hindus gods are seen as a manifestation of 1 all- powerful spirit known as Brahman. Brahma- Creator god Shiva- Destroyer god Vishnu- Preserver god

5 Why could you say that Hinduism is polytheistic, monotheistic religion?
BRAHMAN Vishnu Brahma Shiva

7 Hindus believe that how one acts upon their duties influences how close they are to moksha in their next life. These actions in life are known as karma. Hindus also believe they must live their lives according to a philosophy of nonviolence. This is known as ahimsa. The caste system, the pattern of rigid, hereditary, social classes in Hinduism, is no longer legal in India. Although many Hindus living in India still follow the guidelines of the caste system.

9 Essential Question What are the major Buddhist beliefs and how do those beliefs compare and contrast to Hinduism?

11 PLACE/TIME PERIOD OF ORIGIN
Buddhism was founded in the mid 500’s B.C.E in northern India. The religion is named for its founder, Siddhartha Gautama (who became known as Buddha). Prince from India. mother and father kept him sheltered from the “evils” of the world ventured outside the palace walls and saw human suffering

14 Buddhism Spreads 268 BCE Asoka - third leader of the Maurya Empire
Converted to Buddhism and spread the religion ancient India, ruled by the Mauryan dynasty from 321 to 185 BC.

15 Monotheistic or Polytheistic?
Just as in Hinduism, Buddhists believe in the all-powerful spirit known as Brahman. But unlike Hindus, Buddhists do not represent Brahman with gods.

16 Major Beliefs of Buddhism
Just as in Hinduism, Buddhists believe the ultimate goal of existence is to attain union with Brahman (the all-powerful universal spirit)…known as Nirvana. Nirvana takes multiple lifetimes to attain. After death a soul is reborn into a new body. This rebirth of the soul is known as reincarnation.

17 Just as Hindus, Buddhists believe in dharma, karma, and ahimsa.
Unlike Hindus, Buddhists never followed the guidelines of the caste system. Buddhism emphasizes meditation and discipline in order to reach enlightenment.

19 The Four Noble Truths Sorrow and suffering are part of life.
People suffer because they try to get things they cannot have. The way to escape suffering is to overcome these frustrating desires and reach a state of nirvana. To reach this state, you must follow the Eight-fold Path.

22 Types of Buddhism Theravada (Lesser Vehicle)
Buddha is not a god Follow the teachings of Buddha and you may obtain enlightenment Major text - Tripitika Mahayana (Greater Vehicle) Emerged 3rd Century BCE Some followers worshiped Buddha Believe in Boddhisatvas – People who already obtained enlightenment, but remain on earth to help others

24 Thesis Statement Are Buddhism and Hinduism more similar or different?

25 Thesis ‘Formula’ “(Religion) and (Religion) are similar because ________, however they are more different because ______ (difference) and _______(difference).” If you are taking the stance that they are more different then provide TWO differences and only one similarity. You can always take the opposite stance, as well….in which case, you’d provide two similarities and one difference. This is for me to see your thesis writing skills! 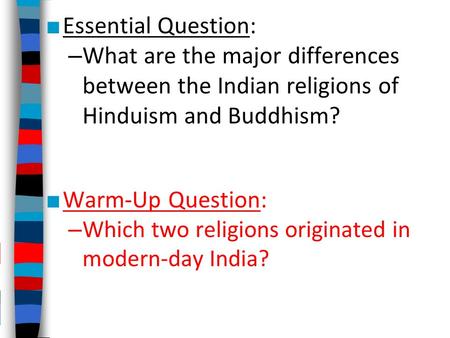 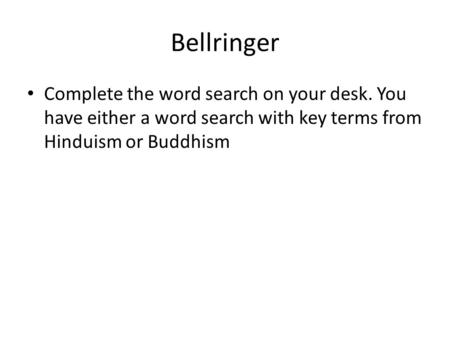 Bellringer Complete the word search on your desk. You have either a word search with key terms from Hinduism or Buddhism.