3 Conflicting Claims The Ohio Valley
Both Britain and France claimed the Ohio Valley. Located along the Ohio River, between the Appalachians and the Mississippi River. To the British, this was an area of trade and growth. To the French, it connected their lands in New France and Louisiana. By 1750, France sent soldiers to the Ohio Valley to get rid of the British. They started building forts. The British saw this as an act of war and decided to fight back.

7 The War Expands Britain Wins Control
Britain sent more troops and supplies. They slowly began to win the war. In 1756 the French and British started fighting battles in Europe, too. The British had a stronger navy and defeated the Spanish in 1762. To make up for Spain’s losses, France gave Spain most of Louisiana. The Treaty of Paris The French and Indian War ended in 1763 with the Treaty of Paris. It gave Britain most of Canada, all French lands east of the Mississippi River, and Spanish Florida. France lost nearly all its lands in North America.

8 More Troubles The end of the French and Indian War caused more trouble for Britain. British Colonists wanted to settle in the Ohio Valley, but these lands were already home to many Native American groups. In 1763, an Ottowa chief named Pontiac united groups along the Mississippi River. They captured some British forts and attacked colonists’ settlements. The Proclamation of 1763 Britain’s King George III tried to end the fighting by making a proclamation. It said all lands west of the Appalachian Mountains belonged to Native Americans. It told white settlers on those lands to leave. Many colonists ignored the king’s proclamation, so fighting between colonists and Native Americans continued. They thought they won the war and should be able to settle on the western frontier. Paying for the War Colonists were also angry about new taxes passed by Parliament. British leaders looked at their budget and discovered they needed more money to pay off the cost of the war. In 1764, the British government passed the Sugar Act to raise money for Britain. It taxed the sugar and molasses brought into the colonies from the West Indies. This hurt businesses in the New England Colonies, so many merchants objected to the tax. The British kept taxing sugar and soon began to add more taxes… dun dun DUNNNNN! 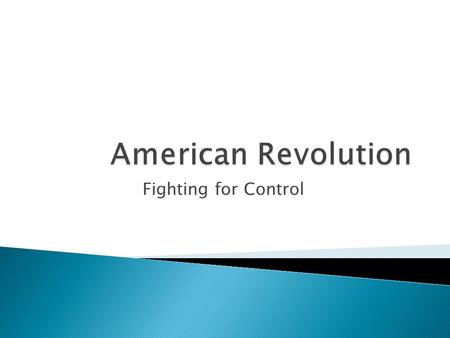