2 What is renewable energy?
Renewable energy can be rapidly regenerated, and some can never be depleted, no matter how much of them we use.

5 How can we use less energy?
Energy conservation- finding ways to use less energy. For example, lowering your thermostat during the winter or driving fewer miles. Energy efficiency- getting the same result from using a smaller amount of energy.

7 Benefits of Conservation and Efficiency
Many energy companies have an extra backup source of energy available to meet the peak demand, the greatest quantity of energy used at any one time. Variable price structure- utility customers can pay less to use energy when demand is lowest and more during peak demand.

8 Sustainable Design Improving the efficiency of the buildings we live and work in.

10 Passive Solar Energy Using passive solar energy can lower your electricity bill without the need for pumps or other mechanical devices. Building the house with windows along a south-facing wall which allows the Sun’s rays to warm the house would be an example.

15 Modern Carbon vs. Fossil Carbon
Many people are confused how burning biomass such as wood is better then burning coal. The carbon found in biomass was in the atmosphere as carbon dioxide, taken in by the tree, and by burning it we put it back into the atmosphere Burning coal is carbon that has been buried for millions of years and was out of circulation until we began to use it. This results in a rapid increase in the concentration of carbon dioxide in the atmosphere.

16 Biomass Wood, Charcoal and Manure- used to heat homes throughout the world. Ethanol and Biodiesel (biofuels)- used as substitutes for gasoline and diesel fuel.

21 Types of hydroelectric power systems
Run-of-the-river systems- water is held behind a dam and runs through a channel before returning to the river. Water impoundment- water is stored behind a dam and the gates of the dam are opened and closed controlling the flow of water. Tidal systems- the movement of water is driven by the gravitational pull of the Moon.

22 The Sun’s energy can be captured directly
Active solar energy- capturing the energy of sunlight with the use of a pump or photovoltaic cell and generating electricity.

26 Wind energy is the most rapidly growing source of electricity
Wind energy- using a wind turbine to convert kinetic energy into electrical energy.

28 Hydrogen fuel cells have many potential applications
Fuel cell- a device that operates like a common battery where electricity is generated by a reaction between two chemicals.

31 Measuring Your Impact Choosing a Light Bulb The following table provides information on two types of light bulbs available ata local store. Assume that each bulb lasts exactly its estimated lifetime. each bulb provides the same amount of usable light. the cost of electricity is $0.10 per kilowatt-hour. 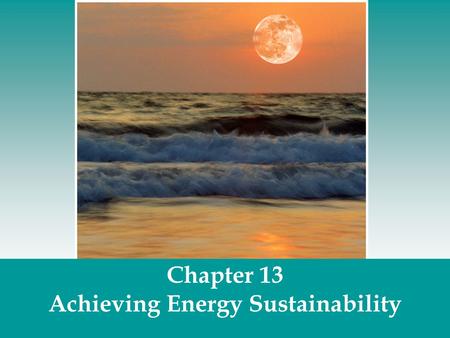 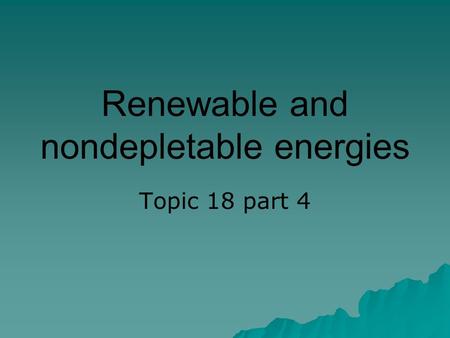 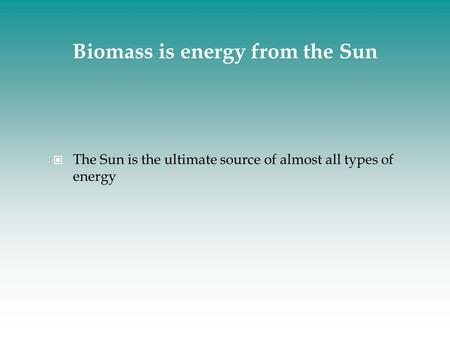 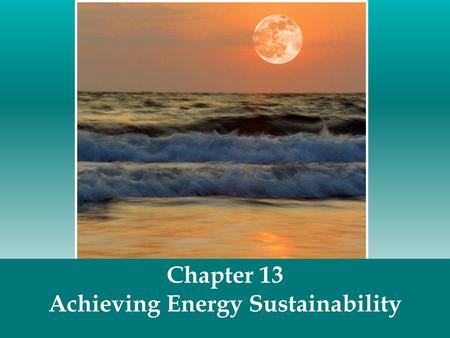 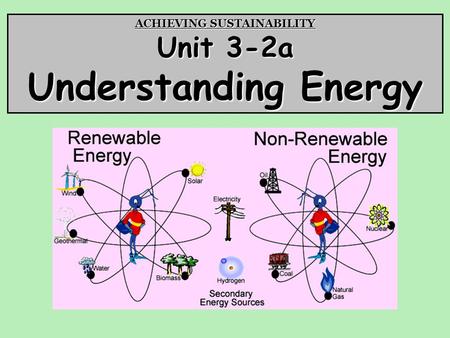 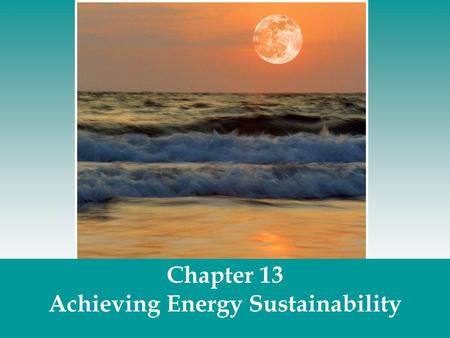