2 GA Performance Standards
SPS10. Students will investigate the properties of electricity and magnetism. SPS10. A. Investigate static electricity in terms of Friction Induction conduction SPS10. B. Explain the flow of electrons in terms of Alternating and direct current The relationship among voltage, resistance, and current Simple series and parallel circuits SPS10. C. Investigate applications of magnetism and/or its relationship to the movement of electrical change as it relates to Electromagnets Simple motors Permanent magnets

4 Electricity is the flow of electrical power or charge.
It is a secondary energy source which means that we get it from the conversion of other sources of energy, like coal, natural gas, oil, nuclear power and other natural sources, which are called primary sources.

7 Atoms basics Protons have a positive charge and electrons have a negative charge An atom has a cloud of negatively charged electrons surrounding the positively charged nucleus. The atom is neutral sense it has equal numbers of protons and neutrons An excess or shortage of electrons produces a net electric charge

12 1. Law of conservation of charge:
Charge may be transferred from object to object, but it cannot be created nor destroyed

14 3. Surrounding every charge is an electric field.

15 Electric Field Electric field is a field in a region of space that exerts electric forces on charged particles the electric field is produce by electric charges or by changes magnetic fields the strength of an electric field depends on the amount of charge that produces the field and on the distance from the field. The more net charge an object has the greater is the force on it

23 Transferring Electric Charge
charge transfer by induction (without contact) Shocking your hand on a doorknob before touching it Being struck by lightning b/c you are standing near a tree.

26 How do we use electricity?
We use electricity to do many jobs for us -- from lighting and heating/cooling our homes, to powering our televisions and computers.  Electricity is a controllable and convenient form of energy used in the applications of heat, light and power.

27 Why it’s important!!!!! Without electric current, many devices would not exist, including telephones, personal computers, and lightning!

28 A. The flow of charges through a wire or conductor is called electric current.
Current is usually the flow of electrons. Electric current is measured in amperes (A). Charges flow from high voltage to low voltage. a. Voltage difference- the push that causes charges to move, measured in volts (V). 4. For charges to flow, the wire must always be connected in a closed path, or circuit.

33 20.2 Electric Current and Ohm’s Law
Insulators create resistance (opposition to the flow of charges in a material) A material’s thickness, length, and temperature affects its resistance

35 Electric Current and Ohm’s Law
In order for charge to flow in a conducting wire, the wire must be connected in a complete loop that includes a source of electrical energy

38 Practice Example What is the resistance if the voltage is 3 volts and the current is 9 amps?

39 Practice Example What is the voltage if the resistance is 12 ohms and the current is 4 amps?

40 Practice Example What is the current if the voltage is 14 volts and the resistance is 7 ohms?

42 Why It’s Important! The convenience and safety of household electricity depend on how the electric circuits in your home are designed.

43 Electrical Energy Circuits rely on generators at power plants to produce a voltage difference across the outlet, causing the charge to move when the circuit is complete. Two Types of Circuits: 1. Series Circuits 2. Parallel Circuits

44 Series / Parallel Circuits
Series circuit- the current has only one loop wired one after another, so the amount of current is the same throughout every part. Open circuit- if any part of a series is disconnected, no current flows through the circuit. Example: strings of holiday lights. 2. Parallel circuit- contains two or more branches for current to move through. a. Individual parts can be turned off without affecting the entire circuit. b. Example: the electrical system in a house.

46 Electrical Energy Household circuits use parallel circuits connected in a logical network. 1. Each branch receives the standard voltage difference from the electric company. 2. Electrical energy enters your home at the circuit breaker or fuse box and branches out to wall sockets, major appliances, and lights. 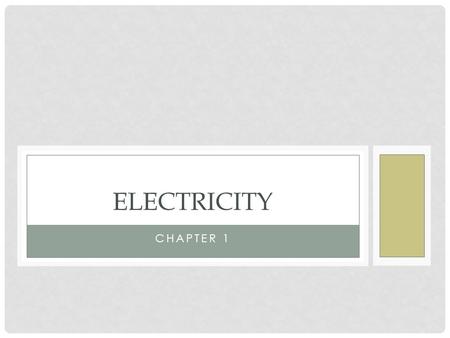 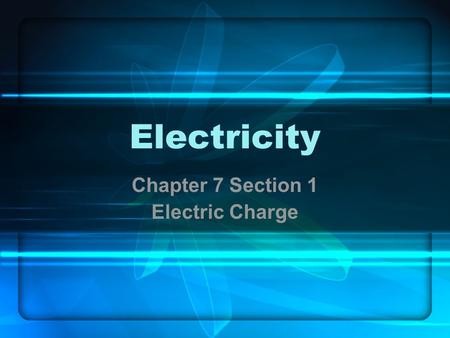 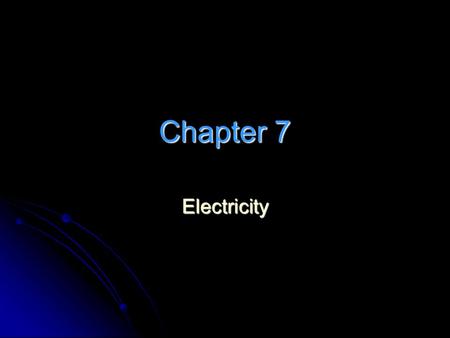