5 AC Circuits Series LCR Statement of problem: Given  =  m sin  t, find i(t). Everything else will follow. Procedure: start with loop equation? We could solve this equation in the same manner we did for the LCR damped circuit. Rather than slog through the algebra, we will take a different approach which uses phasors. L C   R

6 Phasors A phasor is a vector whose magnitude is the maximum value of a quantity (eg V or I) and which rotates counterclockwise in a 2-d plane with angular velocity . Recall uniform circular motion: The projections of r (on the vertical y axis) execute sinusoidal oscillation.    R: V in phase with i C: V lags i by 90  L: V leads i by 90   x y y

9 Series LCR AC Circuit Consider the circuit shown here: the loop equation gives: Here all unknowns, (i m,  ), must be found from the loop eqn; the initial conditions have been taken care of by taking the emf to be:  m sin  t. To solve this problem graphically, first write down expressions for the voltages across R,C, and L and then plot the appropriate phasor diagram. L C   R Assume a solution of the form:

10 Phasors: LCR Assume: From these equations, we can draw the phasor diagram to the right.  L C   R  This picture corresponds to a snapshot at t=0. The projections of these phasors along the vertical axis are the actual values of the voltages at the given time. Given: 

11 Phasors: LCR The phasor diagram has been relabeled in terms of the reactances defined from:  L C   R The unknowns (i m,  ) can now be solved for graphically since the vector sum of the voltages V L + V C + V R must sum to the driving emf .

14 Phasors:Tips This phasor diagram was drawn as a snapshot of time t=0 with the voltages being given as the projections along the y-axis. y x  imRimR imXLimXL imXCimXC mm “Full Phasor Diagram” From this diagram, we can also create a triangle which allows us to calculate the impedance Z: Sometimes, in working problems, it is easier to draw the diagram at a time when the current is along the x-axis (when i=0). “ Impedance Triangle” Z |  R | X L -X C |

15 Resonance For fixed R,C,L the current i m will be a maximum at the resonant frequency  0 which makes the impedance Z purely resistive. the frequency at which this condition is obtained is given from:  Note that this resonant frequency is identical to the natural frequency of the LC circuit by itself! At this frequency, the current and the driving voltage are in phase! ie: reaches a maximum when: X L =X C

16 Resonance The current in an LCR circuit depends on the values of the elements and on the driving frequency through the relation Suppose you plot the current versus , the source voltage frequency, you would get: “ Impedance Triangle” Z |  R | X L -X C | 12 x imim 0 0  o  R=R o  m / R 0 R=2R o

17 Power in LCR Circuit The power supplied by the emf in a series LCR circuit depends on the frequency . It will turn out that the maximum power is supplied at the resonant frequency  0. The instantaneous power (for some frequency,  ) delivered at time t is given by: The most useful quantity to consider here is not the instantaneous power but rather the average power delivered in a cycle. To evaluate the average on the right, we first expand the sin(  t-  ) term. Remember what this stands for

19 Power in LCR Circuit This result is often rewritten in terms of rms values: Power delivered depends on the phase,  the  “power factor” phase depends on the values of L, C, R, and  therefore... 

20 Power and Resonance in RLC Power, as well as current, peaks at  =  0. The sharpness of the resonance depends on the values of the components. Recall: Therefore, We can write this in the following manner (which we won’t try to prove): …introducing the curious factors Q and x Z |  R | X L -X C |

21 The Q factor A parameter “Q” is often defined to describe the sharpness of resonance peaks in both mechanical and electrical oscillating systems. “Q” is defined as where U max is max energy stored in the system and  U is the energy dissipated in one cycle For RLC circuit, U max is (e.g.) And losses only in R, namely period This gives

22 The Q factor Q also determines the sharpness of the resonance peaks in a graph of Power delivered by the source versus frequency. It turns out (exercise for you) that this function reaches ½ of its maximum at the values, The average power in our LCR circuit is given by We know this has a maximum at  =  o. This gives a new meaning to Q.

23 The Q factor Q also determines the sharpness of the resonance peaks in a graph of Power delivered by the source versus frequency. oo  Low Q High Q P av 

26 Power Transmission How do we transport power from power stations to homes? – At home, the AC voltage obtained from outlets in this country is 120V at 60Hz. –Transmission of power is typically at very high voltages ( eg ~500 kV) (a “high tension” line) –Transformers are used to raise the voltage for transmission and lower the voltage for use. We’ll describe these next. But why? –Calculate ohmic losses in the transmission lines: –Define efficiency of transmission: – Note for fixed input power and line resistance, the inefficiency  1/V 2 Keep R small Make V in big

27 Transformers   (primary) (secondary) AC voltages can be stepped up or stepped down by the use of transformers. iron The AC current in the primary circuit creates a time-varying magnetic field in the iron The iron is used to maximize the mutual inductance. We assume that the entire flux produced by each turn of the primary is trapped in the iron. V2V2 V1V1 This induces an emf on the secondary windings due to the mutual inductance of the two sets of coils.

29 Ideal Transformers What happens when we connect a resistive load to the secondary coil? –Flux produced by primary coil induces an emf in secondary R with a Load –This changing flux appears in the primary circuit as well; the sense of it is to reduce the emf in the primary... –However, V 1 is a voltage source. –Therefore, there must be an increased current i 1 (supplied by the voltage source) in the primary which produces a flux  N 1 i 1 which exactly cancels the flux produced by i 2. –emf in secondary produces current i 2 –This current produces a flux in the secondary coil  N 2 i 2  which opposes the original flux -- Lenz’s law

30 Transformers with a Load With a resistive load in the secondary, the primary current is given by: R It’s time..

33 Fields from Circuits? We have been focusing on what happens within the circuits we have been studying (eg currents, voltages, etc.) What’s happening outside the circuits?? –We know that: »charges create electric fields and »moving charges (currents) create magnetic fields. –Can we detect these fields? –Demos: » We saw a bulb connected to a loop glow when the loop came near a solenoidal magnet. »Light spreads out and makes interference patterns. Do we understand this? 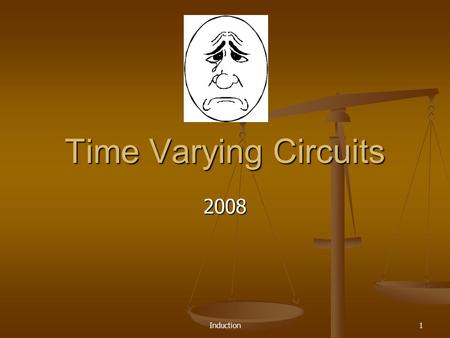 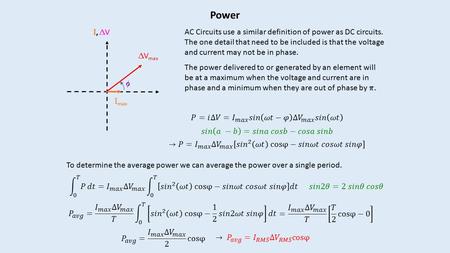 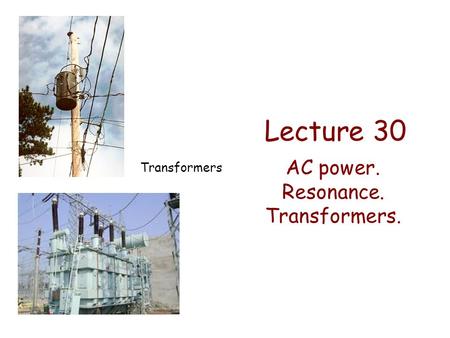 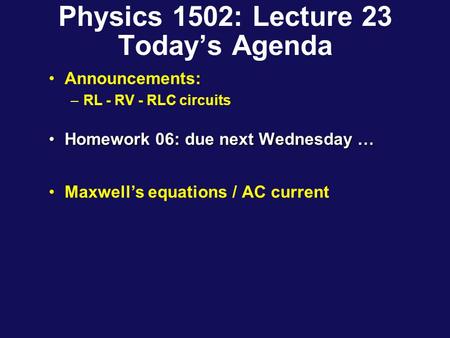 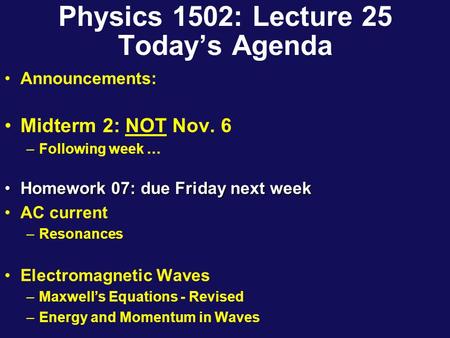 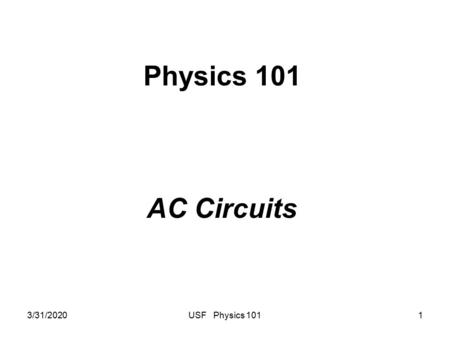 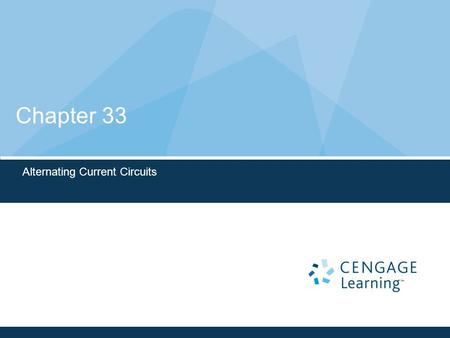 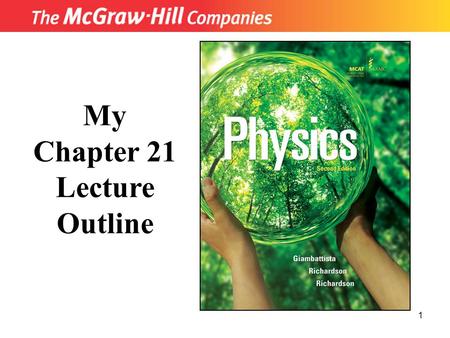 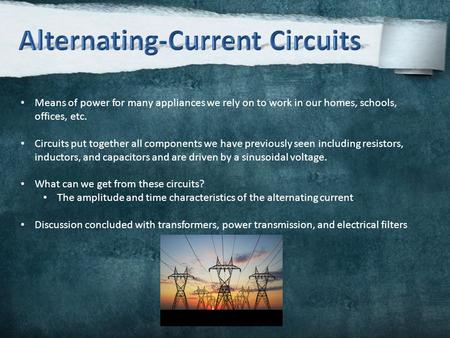 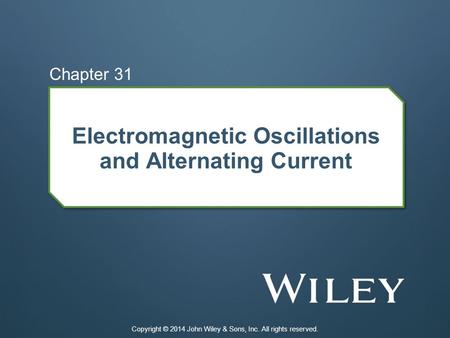 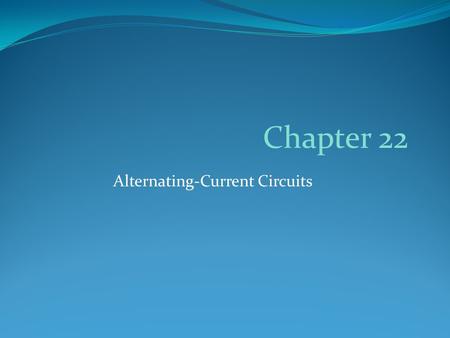