3 Surface Currents What are some effects of ocean currents?
Transfer heat from tropical to polar regions Influence weather and climate Distribute nutrients and scatter organisms Surface currents are driven by wind: Most of Earth’s surface wind energy is concentrated in the easterlies and westerlies. Due to the forces of gravity, the Coriolis effect, and winds, water often moves in a circular pattern called a gyre.

5 Surface Currents Flow around the Periphery of Ocean Basins
Surface water blown by the winds at point A will veer to the right of its initial path and continue to the east. Water at point B veers right and continues to the west.

8 Consider the North Atlantic.
Surface Currents Flow around the Periphery of Ocean Basins Consider the North Atlantic. The surface is raised through wind motion and Ekman transport to form a low hill. The westward-moving water at B ‘feels’ a balanced pull from two forces: the one due to Coriolis effect (which would turn the water to the right) and the one due to the pressure gradient, driven by gravity (which would turn it to the left). The hill is formed by Ekman transport. Water turns clockwise (inward) to form the dome, then descends, depressing the thermocline.

12 Boundary Currents Have Different Characteristics
Eddy formation The western boundary of the Gulf Stream is usually distinct, marked by abrupt changes in water temperature, speed, and direction. (a) Meanders (eddies) form at this boundary as the Gulf Stream leaves the U.S. coast at Cape Hatteras. The meanders can pinch off (b) and eventually become isolated cells of warm water between the Gulf Stream and the coast (c). Likewise, cold cells can pinch off and become entrained in the Gulf Stream itself (d). (C = cold water, W = warm water; blue = cold, red = warm.)

17 Thermohaline Circulation Affects All the Ocean’s Water
The movement of water due to different densities is thermohaline circulation. Remember that the ocean is density stratified, with the densest water at the bottom. There are five common water masses: Surface water = 0-200m Central water = 200-thermocline Intermediate water = thermocline-1500m Deep water = m Bottom water = 4000-bottom

21 Water Masses May Converge, Fall, Travel across the Seabed, and Slowly Rise
A model of thermocline circulation caused by heating in lower latitudes and cooling in higher latitudes. The thermocline at middle and low latitudes is “held up” by the slow upward movement of cold water. The water layers and deep circulation of the Atlantic Ocean. Arrows indicate the direction of water movement. Convergence zones are areas where water masses approach one another.

24 Dansgaard–Oeschger events (often abbreviated D–O events) are rapid climate fluctuations that occurred 25 times during the last glacial period, from approximately 110,000 to 12,000 years ago

29 Chapter 9 - Summary Ocean water circulates in currents caused mainly by wind friction at the surface and by differences in water mass density beneath the surface zone. Water near the ocean surface moves to the right of the wind direction in the Northern Hemisphere, and to the left in the Southern Hemisphere. The Coriolis effect modifies the courses of currents, with currents turning clockwise in the Northern Hemisphere and counterclockwise in the Southern Hemisphere. The Coriolis effect is largely responsible for the phenomenon of westward intensification in both hemispheres. Upwelling and downwelling describe the vertical movements of water masses. Upwelling is often due to the divergence of surface currents; downwelling is often caused by surface current convergence or an increase in the density of surface water.

30 Chapter 9 - Summary El Niño, an anomaly in surface circulation, occurs when the trade winds falter, allowing warm water to build eastward across the Pacific at the equator. Circulation of the 90% of ocean water beneath the surface zone is driven by gravity, as dense water sinks and less dense water rises. Since density is largely a function of temperature and salinity, the movement of deep water due to density differences is called thermohaline circulation. Water masses almost always form at the ocean surface. The densest (and deepest) masses were formed by surface conditions that caused water to become very cold and salty. Because they transfer huge quantities of heat, ocean currents greatly affect world weather and climate. 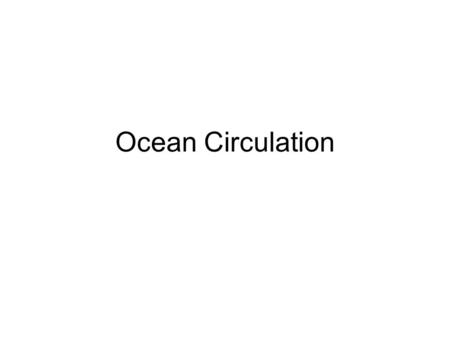 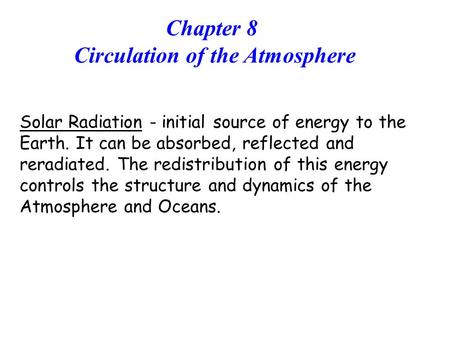 Solar Radiation - initial source of energy to the Earth. It can be absorbed, reflected and reradiated. The redistribution of this energy controls the structure.