2 Formation of A Sea Breeze
No pressure gradient, no wind. (b) Unequal heating creates pressure differences aloft which causes air to flow. The transfer of air aloft (from the land to the sea) creates a surface high over the sea which results in a flow of air from sea to land (a.k.a. a sea breeze). Returning air Sea Breeze

9 Newton’s Laws of Motion (condensed version)
An object in motion tends to stay in motion (unless acted upon by an external force) II. F = ma (that’s pretty much it.)

10 Put down the pencils Let’s break down the forces

12 Just a Pressure Gradient
Wind blows straight from High to Low, eventually evening out the pressure and stopping the wind. H L Pressure

13 Just a Pressure Gradient
The wind would blow at the same speed regardless of altitude. H L Pressure return

14 Now add Friction Then wind still blows straight from High P to Low P, but it doesn’t get moving as fast as soon, especially near the ground View from top H L Pressure back up

15 Friction and Pressure Gradient
The pressure difference also evens out eventually, though it might take a bit longer. H L Pressure

16 Friction and Pressure Gradient
Friction slows the wind at the ground—its effects decrease as you go up in the atmosphere. H L Pressure

17 Friction and Pressure Gradient
Friction slows the wind at the ground—its effects decrease as you go up in the atmosphere. H L Pressure back up

18 Pressure Gradient and Coriolis
Forget friction. The wind starts out straight, but as soon as it starts building up speed, the Coriolis force turns it a bit to the right. H L The wind can’t accelerate any more over here because it’s going parallel to the isobars This is the Geostrophic Flow

20 Pressure Gradient and Coriolis
Since the wind never really reaches the low, the pressure difference is maintained, and the low never fills! H L

22 Reality: Pressure Gradient, Coriolis Force, and Friction
The wind doesn’t blow straight from High to Low, but it does eventually get in there and even out the pressure difference, so H and L don’t last forever without a source of energy H L 30º

23 Reality: Pressure Gradient, Coriolis Force, and Friction
Friction slows the wind at the ground—its effects decrease as you go up in the atmosphere. H L Pressure

24 Reality: Pressure Gradient, Coriolis Force, and Friction
Coriolis Force is turning the wind toward us in the right part of the picture. H L Pressure

25 Reality: Pressure Gradient, Coriolis Force, and Friction
Since the Coriolis Force depends on wind speed, its effect decreases toward the ground where the wind speed is slower. Coriolis H L Friction Pressure

29 Curved Flow and the Gradient Wind
Cyclonic Flow Anticyclonic Flow Actual flow around pressure systems are never this regular (because of small changes in the pressure field).

34 Troughs and Ridges An elongated region of low pressure (trough) or high pressure (ridge) Tend to be quite common at higher altitudes At the surface, a trough is usually a fairly weak feature

35 How Winds Generate Vertical Air Motion
Around a surface low pressure center, a net inward transport of air causes a shrinking of the area occupied by the mass. This is known as horizontal convergence. 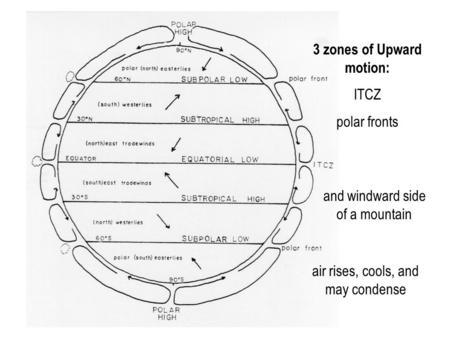 3 zones of Upward motion: ITCZ polar fronts and windward side of a mountain air rises, cools, and may condense.