3 28.1 Electromotive Force The electromotive force (emf), e, of a battery is the maximum possible voltage that the battery can provide between its terminals The emf supplies energy, it does not apply a force The battery will normally be the source of energy in the circuit The positive terminal of the battery is at a higher potential than the negative terminal We consider the wires to have no resistance

10 Resistors in Series, cont
Potentials add ΔV = IR1 + IR2 = I (R1+R2) Consequence of Conservation of Energy The equivalent resistance has the same effect on the circuit as the original combination of resistors

15 Resistors in Parallel The potential difference across each resistor is the same because each is connected directly across the battery terminals A junction is a point where the current can split The current, I, that enters a point must be equal to the total current leaving that point I = I 1 + I 2 The currents are generally not the same Consequence of Conservation of Charge

19 Resistors in Parallel, Final
In parallel, each device operates independently of the others so that if one is switched off, the others remain on In parallel, all of the devices operate on the same voltage The current takes all the paths The lower resistance will have higher currents Even very high resistances will have some currents Household circuits are wired so that electrical devices are connected in parallel

22 28.3 Kirchhoff’s Rules There are ways in which resistors can be connected so that the circuits formed cannot be reduced to a single equivalent resistor Two rules, called Kirchhoff’s rules, can be used instead

23 Kirchhoff’s Junction Rule
The sum of the currents at any junction must equal zero Currents directed into the junction are entered into the -equation as +I and those leaving as -I A statement of Conservation of Charge Mathematically,

25 Kirchhoff’s Loop Rule Loop Rule Mathematically,
The sum of the potential differences across all elements around any closed circuit loop must be zero A statement of Conservation of Energy Mathematically,

30 Kirchhoff’s Rules Equations, final
In order to solve a particular circuit problem, the number of independent equations you need to obtain from the two rules equals the number of unknown currents Any capacitor acts as an open branch in a circuit The current in the branch containing the capacitor is zero under steady-state conditions

31 Problem-Solving Strategy – Kirchhoff’s Rules
Conceptualize Study the circuit diagram and identify all the elements Identify the polarity of the battery Imagine the directions of the currents in each battery Categorize Determine if the circuit can be reduced by combining series and parallel resistors If so, proceed with those techniques If not, apply Kirchhoff’s Rules

32 Problem-Solving Strategy, 2
Analyze Assign labels and symbols to all known and unknown quantities Assign directions to the currents The direction is arbitrary, but you must adhere to the assigned directions when applying Kirchhoff’s rules Apply the junction rule to any junction in the circuit that provides new relationships among the various currents

33 Problem-Solving Strategy, 3
Analyze, cont Apply the loop rule to as many loops as are needed to solve for the unknowns To apply the loop rule, you must choose a direction in which to travel around the loop You must also correctly identify the potential difference as you cross various elements Solve the equations simultaneously for the unknown quantities Draw the circuit diagram and assign labels and symbols to all known and unknown quantities. Assign directions to the currents. The direction is arbitrary, but you must adhere to the assigned directions when applying Kirchhoff’s rules Apply the junction rule to any junction in the circuit that provides new relationships among the various currents

34 Problem-Solving Strategy, final
Finalize Check your numerical answers for consistency If any current value is negative, it means you guessed the direction of that current incorrectly The magnitude will still be correct

35 28.4 RC Circuits In direct current circuit containing capacitors, the current may vary with time The current is still in the same direction An RC circuit will contain a series combination of a resistor and a capacitor

39 Time Constant, Charging
The time constant represents the time required for the charge to increase from zero to 63.2% of its maximum t has units of time The energy stored in the charged capacitor is ½ Qe = ½ Ce2

40 Discharging a Capacitor in an RC Circuit
When a charged capacitor is placed in the circuit, it can be discharged q(t) = Qe-t/RC The charge decreases exponentially

41 Discharging Capacitor
At t =  = RC, the charge decreases to Qmax In other words, in one time constant, the capacitor loses 63.2% of its initial charge The current can be found Both charge and current decay exponentially at a rate characterized by t = RC

42 RC Circuit, Example Adjust the values of R and C
Observe the effect on the charging and discharging of the capacitor PLAY ACTIVE FIGURE 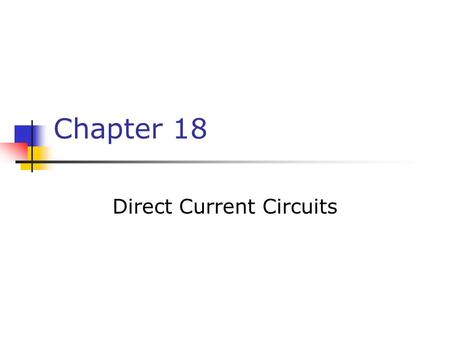 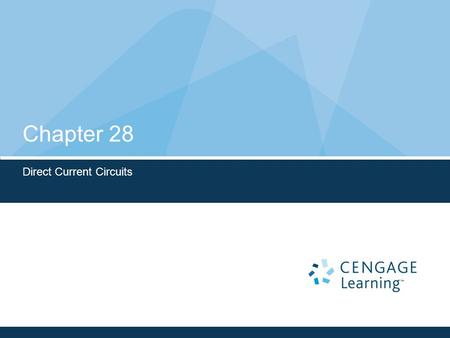 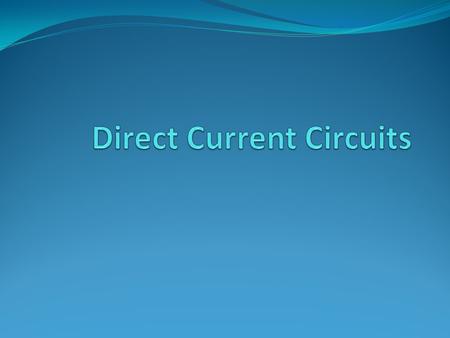