“Many Peoples, Many Faiths” by Ameena Zia Reflect On Do you have to be religious to pray? How many of you pray before turning in a paper, for an exam,

Presentation on theme: "“Many Peoples, Many Faiths” by Ameena Zia Reflect On Do you have to be religious to pray? How many of you pray before turning in a paper, for an exam,"— Presentation transcript:

2 “Many Peoples, Many Faiths” by Ameena Zia

3 Reflect On Do you have to be religious to pray? How many of you pray before turning in a paper, for an exam, or quiz? Is there only one way to pray?

4 “Prayer is an effort to communicate with God, or to another deity or spirit, either to offer praise, to make a request, or simply to express one's thoughts and emotions” - Wikipedia Encyclopedia

5 Judaism * Believe in One God, Yahweh. * Oldest Abrahamic Religion. Q. What is an Abrahamic Religions? * Jews read from the Torah, Old Testament, and Talmud. * The Torah is written in Hebrew. * They rest on Shabbat, Sabbath, begins before sundown on Friday till sunset on Saturday. * do no work: ie. Writing, Driving * Three daily prayers, prayers to say --small * Congregated prayers consist of 10 men.

8 Hinduism No specific founder Oldest major Religion still practiced Today Polytheistic: belief in many Gods Divine: Brahman = Atman Great God: Vishnu (many reincarnations of Him) Source: The Vedas Believe in Wheel of Samsara (reincarnation) One has a Dharma: Sacred Duty Born into a Caste – due your duty correctly be reborn higher.

9 Buddhism Emerged in 6 th B.C.E –Reform of Hinduism The Buddha: Enlightened or Awakened One –Siddhartha Guatama –Religion and Philosophy of Life based on the Buddha The Four Noble Truths concern Nature of Life The Eight Fold Path – live by these instructions Believe in Samsara too Achieve Nirvana: True Liberation, the Goal Meditation – form of prayer

10 Atheism “The theory or belief that God does not exist.” (The Atheist and his Atheism) Consequence of what one knows –How one reasons Not really a religion, lacks the requirements Do they Pray? Q. What is their take on Prayer in School?

11 Food 4 Thought Is one allowed to pray in school? Which religion, if any, is effected by this? Compare and Contrast two religions? Which religions are Eastern? Western? What is something new you learned today?

13 Religion of the Worlds

Download ppt "“Many Peoples, Many Faiths” by Ameena Zia Reflect On Do you have to be religious to pray? How many of you pray before turning in a paper, for an exam," 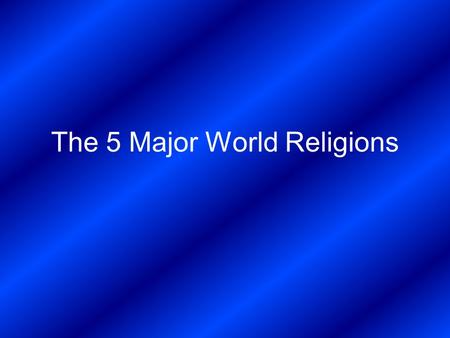 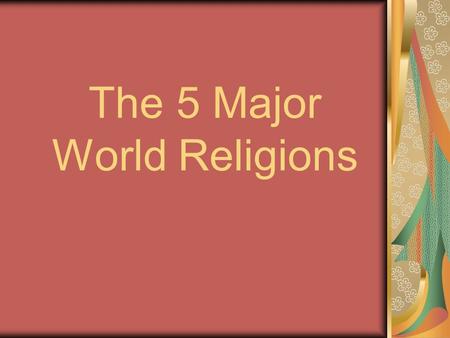 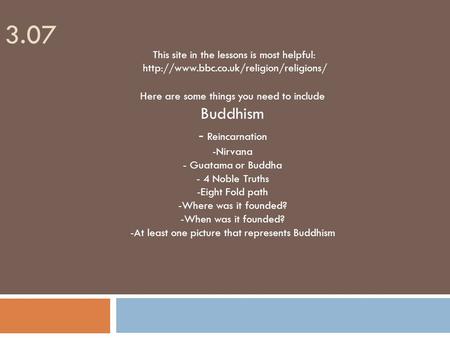 3.07 Here are some things you need to include Buddhism - Reincarnation -Nirvana - Guatama or Buddha - 4 Noble Truths -Eight Fold path -Where was it founded?